The philosophy shining behind the work of Stanley Kubrick

May 29, 2011 By Clément Sénéchal
This article is freely available. Check out our subscription offers. Subscribe

Mediapart: What is the historical cause of the advent of nihilism?

S.A.: For Nietzsche, the event directly linked to the advent of nihilism is the famous ‘death of god'. But which god died? Nietzsche's answer is unequivocal. It is the Judeo-Christian god, the one to whom was given an absolute right to oversee everything we do, the one who even followed us into the toilet to judge our conduct. But careful, saying that the Judeo-Christian God is dead doesn't mean for Nietzsche a profession of atheism. It simply signifies confirmation of the fact that western societies have become secularised, and that all the old values have been devalued.

Mediapart: Beyond faceless destruction, what is the role played by death in the work of Kubrick?

S.A.: In Paths of Glory we watch, powerless, the execution of three soldiers unjustly condemned. Kubrick manages to individualise the horrors of war by showing us the different reaction of each soldier in the face of death. You experience existential vertigo. The same thing happens in the duel scene in Barry Lyndon. Nobody dies, but Lord Bullingdon is made aware of his mortality. It's probably in this scene and in the unplugging of HAL in 2001 that fear of death is best portrayed in Kubrick's work.

Mediapart: In the exploration of these different forms of nihilism by Stanley Kubrick, what is the importance of the narrative environment through which the characters move?

S.A.: In The Shining, for example, the Overlook Hotel is, like Hal, a ubiquitous, panoptic entity. This place is, in appearance, invested with passive nihilism, it's a luxury hotel where planning and organisation of resources reign for the wellbeing of guests. But the hotel empties and soon its lift starts to belch hectolitres of blood. Where does all this blood come from? We know the hotel was built on an Indian cemetery. It could therefore be that all this blood belongs to the corpses of the former inhabitants of the North American continent. It could also be that this blood belongs to all the peoples sacrificed on the altar of western civilisation. Genocides are regurgitated by the hotel, and Jack becomes a vector for this overflowing horror, an agent of active nihilism. 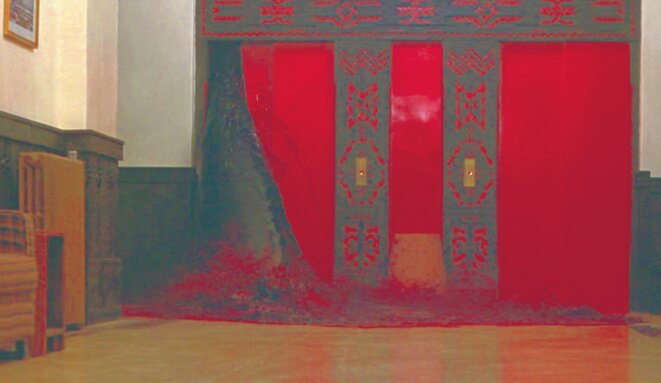