French presidentialism and the impoverishment of democracy

President Emmanuel Macron on Friday replaced Édouard Philippe as his prime minister with the appointment of a senior civil servant, Jean Castex. It is yet another example of the excesses of the all-powerful presidential system in France, writes Mediapart publishing editor Edwy Plenel in this op-ed article, whereby a demonetized president can, alone, change a government for his own political convenience. In an intelligent and adult democracy, he argues, such changes would come about through the debate and collective choices of a parliamentary majority.

Every pedagogue knows that teaching is about repetition. At Mediapart we never tire of repeating that, under Emmanuel Macron today, like under Nicolas Sarkozy and then François Hollande before him, French presidentialism is the fundamental enemy of a democratic and social republic, such that it endlessly saps it from the inside, corrupting and weakening it.

Presidentialism is to the presidential regime what fundamentalism is to religion, what absolutism is to monarchies, and what sectarianism is to beliefs. It is not the fact that there is a president of a republic, it is rather that the republic be in the hands of a president.

A legacy of Bonapartism, this Caesarism which laicized the monarchy of divine right amid the ruins of a betrayed and uncompleted democratic revolution, our presidentialism in France is a regime of exception that has become the norm. A norm whose excesses have never ceased to spread ever since, in the 1980s, then French president François Mitterrand transformed the presidency into a fort resisting electoral routs and discredit.

Mitterrand, at the very beginning of the Fifth Republic, called it a “permanent coup d’Etat” – 20 years before he disowned that wonderful intuition through his own practice of power. Born from a civil war, a decolonisation as tardy as it was tragic and which produced a traumatism upon a nation that lived as an empire, this presidentialism ended up symbolising warlike politics. Politics that were regarded as an incessant battle, with allies and enemies, others won over and others defeated, with henchmen and the corrupt, traitors and the subdued. In sum, a primitive form of politics, violent and underhand, with no frankness or transparency, manoeuvring and self-interested, where – apart from (very) rare exceptions – ideals end up dissolving into careers. 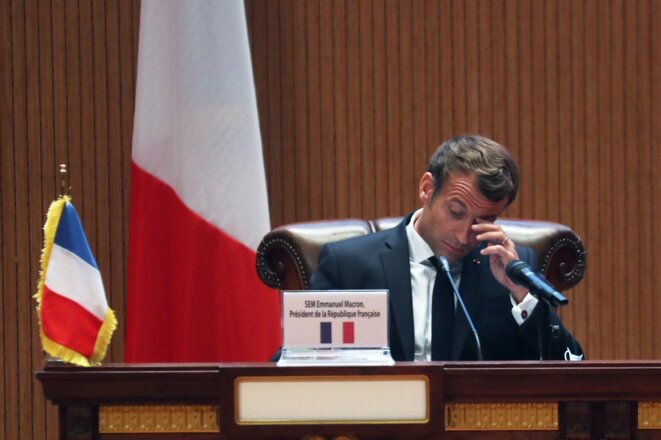 France is a democracy of weak intensity. It has the unction but not the conviction, the appearance but not the essence, the words but not the culture. True democracy, the condition of a social republic, is an ecosystem that presupposes an equilibrium, plurality and vitality, precautions and participation, powers and counter-powers. Instead of which we live in an institutional kingdom of disequilibrium, of brutality and authoritarianism, of courtesans and the submissive, of egoism and narcissism.

All of which produces a political impoverishment, in which the media scene is an infantilising theatre, offering the spectacle of commentators zealously sounding out the president’s mood and relaying the little secrets confided by inner circles, in a process marked by toadying and pettiness.

We can take no more of this mindlessness and idiocy. Must we resign ourselves to accepting as normal that a totally demonetized president, whose deceptive mask rapidly fell in the year following his election on May 7th 2017, can change the composition of the country’s government for his convenience and comfort alone?

In an intelligent and adult democracy, such changes would come about from debates and collective choices among the parliamentary majority or the ruling party. There would be an assessment and confronting views, discussions and alliances – in short, a visible and clear political process that would no longer be confined to the presidential office or mind. Instead of which, we have a discredited president who can replace a popular prime minister (Édouard Philippe) by a sort of intendant senior civil servant (Jean Castex), otherwise put, a governing prefect.

The constitution of the Fifth Republic allows the president in place to take the republic hostage, and to decree that his personal necessities are the common interest. In doing so, it ruins politics, precisely as a common good. The electoral ground ceaselessly gives way under the feet of the sorcerer's apprentices who profit and abuse amid this renunciation of democracy.

Hidden behind the unexpected shake-up which produced the improbable scenario of the 2017 presidential election was an otherwise powerful and constant factor: namely abstention, that civic secession which expresses the lassitude of a people who are not fooled and who no longer wish to play a back-up role to a game from which they are excluded. In the second and final round of the presidential election, the abstention rate was 25.44%, and in the ensuing parliamentary elections it was 57.36%. In the elections for the European Parliament in 2019, it was 49.88%.

The unprecedented abstention rate of 58.6% in the second round of nationwide municipal elections held last Sunday underlined this to all of that political world who think only of the next presidential election – whereas the whole of the malaise of democracy stems from the dispossession of the sovereignty of the people by the presidential power.

All of those in the political opposition who continue to close themselves within this presidential game by pretending that they will change the situation from the inside simply deepen the abyss into which democracy in France has slipped and foundered. It is impossible to believe in their gamble, if one considers it to be sincere, or to lend them credit, if one knows it is self-interested, such is the extent to which the last three presidential elections have demonstrated the corruption of political ideals, in which the political bearings of citizens became lost.

How can one not understand the growing desertion of the electorate when so many political figures who just four years ago proclaimed themselves to be socialists leant their support in the recent municipal elections to rightwing candidates in their towns, to a background of alliances between Emmanuel Macron’s LREM party and the conservative Les Républicains?

Amid his rout in Lyon, Gérard Collomb is the tree that hides the forest; so many Socialist Party cadres, leading figures, ministers and elected representatives are now to be found in the corridors of Macron-ian power, the politics of which have absolutely nothing in common with the Left, its history, its combat nor its ideals. That has been constantly confirmed by its authoritarian, reactionary, inegalitarian and identitarian drift in face of social movements, from the “yellow vests” to the upspring of young environmentalists, from the strikes over pension reforms to the mobilisations against racism, and the general uprising against police violence that has been as encouraged as much as it has been tolerated by the government.

In his work Essays, the 16th-century French philosopher Michel de Montaigne wrote of a mysterious people who, because they did not know how to pronounce the word “no”, fell into definitive servitude, a discreet tribute to Discourse on Voluntary Servitude, a treatise by his friend Étienne de la Boétie, on the insurrection of freedom against submission. An inventive and very modern subtitle was later added to it: Contr’Un. Against the ‘Big One’ and the ‘Big Same’ that produce outrageous rulers and suffering peoples. This tale, however old, has never stopped being relevant: the ‘Big One’ of personal power and the ‘Big Same’ of national identity.

“The first reason for voluntary servitude is habit,” wrote La Boétie. This habit which leads us to bear the power of one person alone as if they were our everything, and which we see as being big because we remain on our knees. “Resolve to serve no more, and you are at once freed,” proclaimed La Boétie. “I do not ask that you place hands upon the tyrant to topple him over, but simply that you support him no longer; then you will behold him, like a great Colossus whose pedestal has been pulled away, fall of his own weight and break in pieces.” (1)

1: From a 1942 translation by Harry Kurz of Discourse on Voluntary Servitude.