May 4, 2011 By Fabrice Arfi, Michaël Hajdenberg and Mathilde Mathieu

French Football Federation (FFF) technical advisor Mohamed Belkacemi (photo) has said he was the person who recorded a November 2010 meeting of the federation's National Technical Board in which a plan to introduce ethnic quotas at the federation's football training academies was detailed, as exclusively revealed by Mediapart last week. While FFF chiefs have expressed surprise at the revelations, now the subject of separate internal and ministerial enquiries, Mediapart has now learnt that Belkacemi last autumn alerted a senior FFF official about the plan by handing him a copy of the recording just days after the meeting.

French Football Federation (FFF) technical advisor Mohamed Belkacemi has this week said he was the person who recorded a November 2010 meeting of the federation's National Technical Board (DTN) in which a plan to introduce ethnic quotas at the federation's football training academies was detailed. The plan was exclusively revealed last week in a Mediapart investigation that reproduced a verbatim account of that meeting, along with other DTN discussions about ethnic selection.

While FFF chiefs have expressed surprise at the revelations, now the subject of separate internal and ministerial enquiries, Mediapart has now learnt that Belkacemi last autumn alerted a senior FFF official about the plan by handing him a copy of the recording just days after the meeting.

Mediapart has learnt from several sources that Mohamed Belkacemi gave a copy of the recording to André Prévosto, director of the amateur football department at the French Football Federation (FFF) and who was at the time (November) the assistant director-general of the FFF, working closely with the Federation's president Fernand Duchaussoy.

Mediapart has repeatedly tried to contact Prévosto, but our calls were not returned. 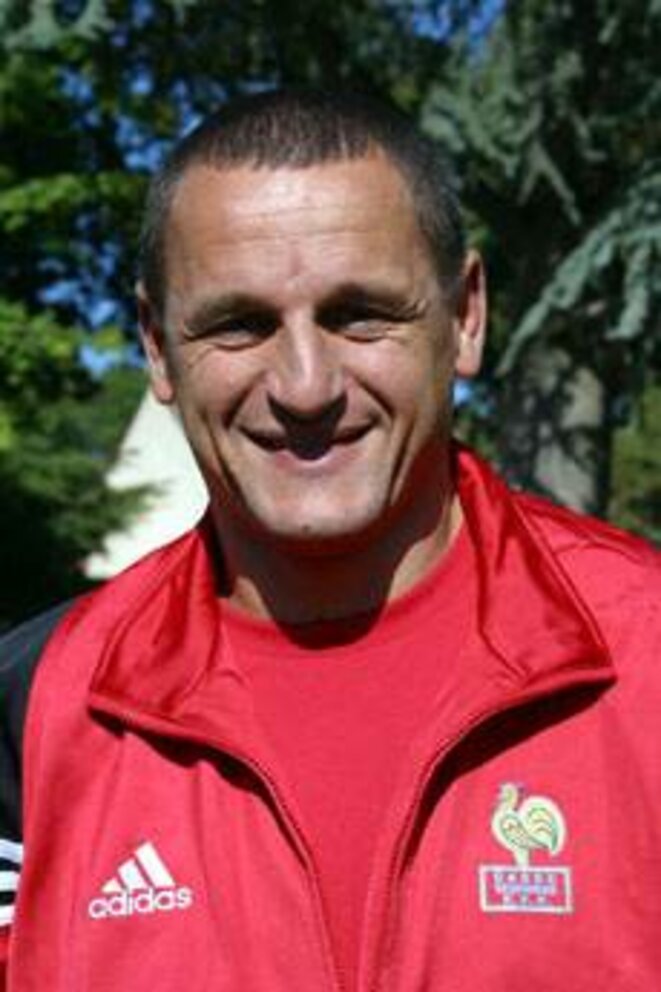 Belkacemi is a civil servant employed by the French sports ministry, whose working mission for the past three years has been that of technical advisor for the FFF's National Technical Board, the DTN, in charge of its "neighbourhood football" programme1, which promotes the sport and its ethics within local communities.

Questioned on Tuesday by the FFF commission led by Member of Parliament Patrick Braouezec and set up to investigate the ethnic quota plan revealed by Mediapart, he stated he had made the recording of the November 8th meeting. Mediapart understands that Belkacemi insisted he did not pass the recording to any media organization, but that he had wanted to alert others within the FFF of the existence of the quota plan.

Contacted by Mediapart, FFF communications director Pierre-Jean Golven refused to comment on the suggestion that Belkacemi had alerted the federation to the plan in November. "I take note of the information you have shared with us," he told Mediapart. "We will add no more than what we have already indicated through press statements. A commission has begun its work and we await its conclusions. We can neither confirm or deny [anything]."

FFF president Fernand Duchaussoy also refused to comment, and released a statement that he wanted "to allow the commission to work in serenely".

Similarly, a spokesperson for the Ministry of Youth and Sport said Wednesday: "We have learnt this from you, like the rest [the quota plan]. We do not wish to respond to your information."

Earlier Wednesday, Sports minister Chantal Jouanno, interviewed on French national radio station France Inter, said: "The enquiry must get to the end, to know why this recording was made, why it was made known only six months afterwards, when the [French Football] federation was in the prime of a pre-election period, why it was not thought necessary to approach the ministry to reveal the illegality of the methods."

Olivier Dord, a professor of public law at Paris Ouest-Nanterre La Défense University, said Belkacemi had committed no professional fault by not first informing the ministry, and had had acted correctly and properly by alerting the FFF. "When a civil servant leaves his service and original department to work in a different post alongside a person who exercises a public service mission, he is no longer under obligation to inform his original department," he explained. "According to the public service statutes, the obligation is towards the public person who latterly employs the civil servant."

In October 2009, Belkacemi was made a Knight of the National Order of Merit (chevalier de l'ordre national du Mérite), a coveted civil honour in France. At a reception in his honour that followed the award, he received glowing praise from a number of leading figures in French football (see the video from the Visofoot website archives further below).

Among them was Gérard Houllier, then the FFF's National Technical Director (now mamnger of English Premier League team Aston Villa). "It's said that medals are like shells, they don't always reach their target, but in this case, concerning Momo, it hit the bull's eye," said Houllier, referring to Belkacemi by the popular abbreviation of his first name Mohamed. "Because if there is someone who properly deserves this distinguished Knight of the National Order of Merit, it's Momo."

"I am extremely pleased to take part in this event honouring Mohamed Belkacemi who deserves it a thousand times over for his actions, his complete support in the neighbourhoods," commented current FFF president Fernand Duchaussoy, then president of the Amateur Football League.

"The word merit, I believe, takes all its meaning, why Momo is an example, a fabulous guy," said Jean-Pierre Escalettes, at the time FFF president. "If football has a role other than organizing competitions, if it has a social role, a human role, well, here Momo demonstrates in these neighbourhoods, with the team he has built around him, that football is something marvelous."

Mediapart's exclusive verbatim revelations of the discussions of the ethnic quota plan at the DTN's meeting last November 8th, were for a large part based on the recording of the meeting, published April 30th after our further investigations and interviews with various witnesses. Mediapart cannot divulge the source from which it obtained the recording, in which the plan was detailed in the presence of France team coach Laurent Blanc.

During the meeting, presided over by National Technical Director François Blaquart, suspended from his duties at the weekend, Blanc said he was "completely favourable" to the idea of "limiting" the number of children, from the age of 12, who are French nationals of foreign origin who, after having been trained in France, could, by using a right to dual nationality "go off to play in North African or African teams".

'I smelt, at the DTN, a whiff of racism'

Blanc also argued for a change in the selection criteria employed by national training academies when recruiting young children into the system, "to be able to attract other people, because if we always have the same criteria, there will always be the same people." 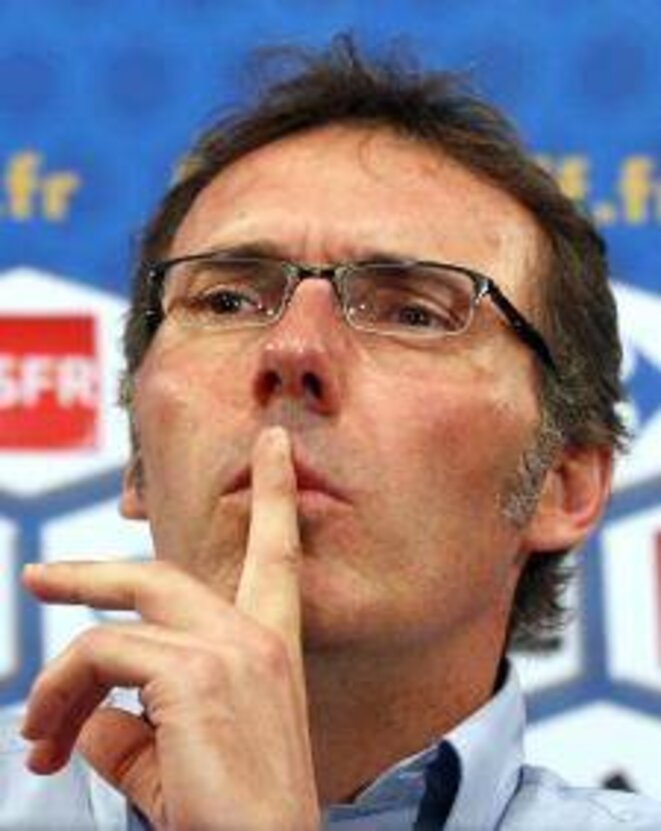 "I think we need to refocus, above all for boys aged between 13 and 14, 12 and 13, to have other criteria, modified with our own culture," Blanc added, before citing Spanish football as an example. "The Spanish, they told me ‘we don't have a problem. Us, we don't have any blacks'," he said.

Mediapart's initial revelations, published April 28th, were met by a series of vehement denials from French football officials that such a plan existed. "I have never heard quotas being spoken of," said Blanc on April 29th during a press conference in Bordeaux. The following day, after Mediapart published the verbatim account of his comments at the November 8th meeting, the France coach publicly offered his excuses if his words had "struck certain sensitivities". That same Saturday, the sports minister Chantal Jouanno suspended Blaquart from his duties, pending the outcome of the investigations launched by her ministry and the FFF, now underway.

André Mérelle was director of the French National Football Institute, the INF (Institut National du Football), based at the Clairefontaine national training centre west of Paris, between 2004 and 2010. "Already, during my time, we were rebuked for taking so many blacks and beurs [French of North African Arab origin]," he told Mediapart. "Let's say that I smelt, at the DTN, a whiff of racism. In 2010, during a meeting I think was in April, in any case one of the last of the season, someone spoke of ‘ethnic characteristics'."

In an interview published May 2nd by French daily Le Parisien, sports minister Chantal Jouanno warned that "if quotas concerning dual nationality holders are proven, it is a crime and is subject to penal law," adding that "in this case, we will transmit [our findings]to the public prosecutor."