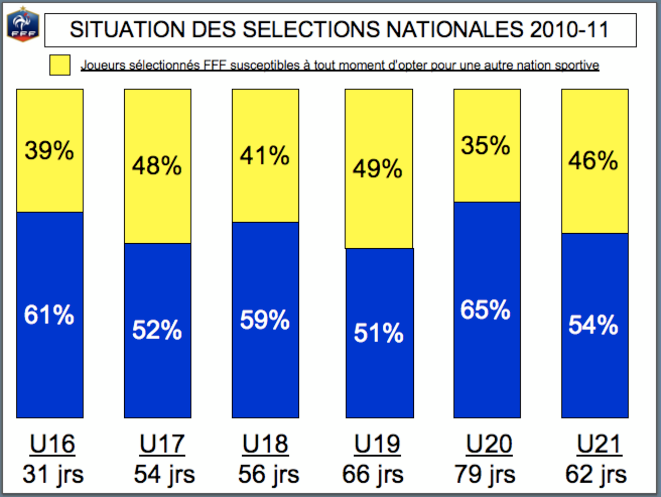 'It's linked to the name, for example'

During the DTN meeting of November 8th last, presided over by National Technical Director Blaquart and revealed in verbatim by Mediapart, national first team coach Blanc said he was "completely favourable" to the idea of "limiting" the number of children, from the age of 12, who are French nationals of foreign origin who, after having been trained in France, he said could, by using dual nationality "go off to play in North African or African teams".

"Our study is not 100 percent categorical," said Blaquart. "It might be 90 percent valid. We are simply raising a problem issue." When pressed further, he said: "Look, it's not hard to know. It's linked to the name, for example." He then said the DTN estimations were also based on "the living experiences" of the players.

Blaquart refused to say whether the DTN held a list of names of players of dual nationality, or potential dual nationality. However, during the November 8th 2010 meeting he was recorded as saying: "We could trace, on a non-spoken basis, a sort of quota. But it must not be said. It stays as action only. There you are, we be careful. We have the lists, at some point in time."

The French commission responsible for upholding civil rights concerning the compilation and use of personal information by third parties, the Commission nationale de l'informatique et des libertés (CNIL), told Mediapart that it had no knowledge of any FFF list concerning the ethnic backgrounds of players. Under French law, a list drawn up by an official organisation of named people that contains details of their family history must be made known to those concerned.

The graph that is presented here contains no ethnic or racial details and therefore cannot be described as representing statistics of ethnic backgrounds, however dubious the criteria employed may have been. As its creator - Blaquart - himself told Mediapart, no precise methodology was employed. Being "susceptible" to choosing dual nationality does not mean that a person has dual nationality, and covers a very wide area that is impossible to define with precision given the different regulations worldwide concerning eligibility to dual citizenship.

The graph, above all, illustrates the FFF's attempts to identify two separate types of French player, those of foreign origins and the others. Whether the issue concerns players of dyual nationality or those "susceptible" to obtain dual nationality, any filtering of these groups is a discriminatory one, being designed to prevent access of opportunity.