This mania for nicknames, this linguistic labelling to highlight skin colour that stuck onto anyone who is perceived as exotic, gets a firm retort in this poem by Senegalese poet Léopold Senghor, 'For My White Brother':

When I was born, I was black,

When I grew up, I was black,

When I am sick, I am black,

When I die, I will be black.

Whereas you, white man,

When you were born, you were pink,

When you grew up, you were white,

When you are in the sun, you are red,

When you are cold, you are blue,

When you are afraid, you are green,

When you are sick, you are yellow,

When you die, you will be grey.

Who is the coloured man?" 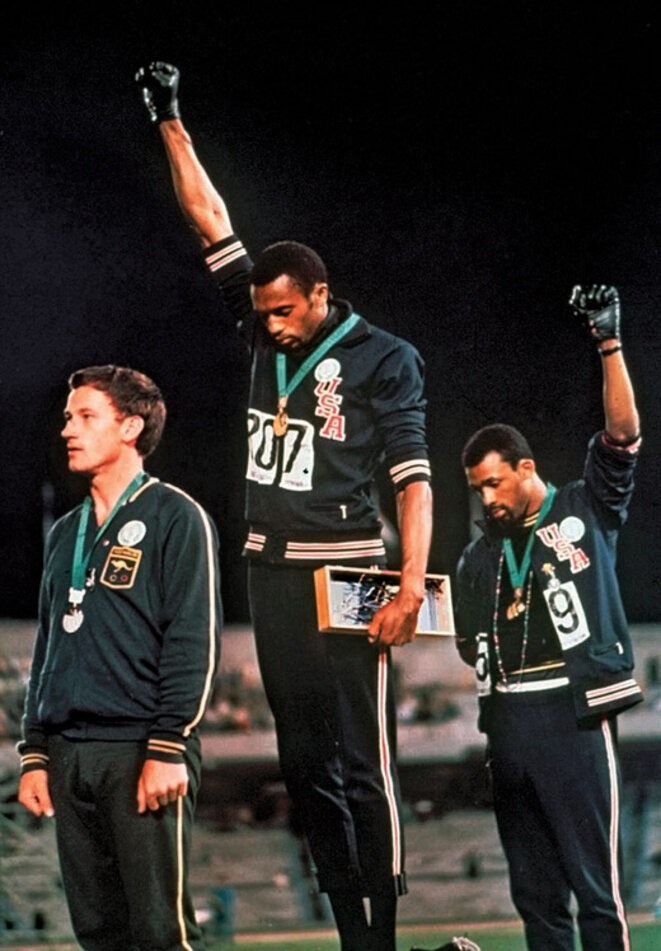 On October 17, 1968 came a first sign that African Americans refused to be merely tolerated in a way that reduced them to the single dimension in which they existed for their "masters". At the Mexico Games, Tommie Smith and John Carlos, who won gold and bronze medals respectively in the Olympic 200m, took over the podium and gave the Black Power salute, their black-gloved fists raised in a universal sign of rebellion.

The president of the International Olympic Committee, the very same Avery Brundage who had been pro-Nazi in 1936, had them banned for life from the Olympics and demanded that they be suspended from the American team. But the message had got through. Blacks went from being on the defensive to a position of challenging the status quo. They freed themselves from their status as second-class athletes for a country which had replaced slavery with segregation.

Their protest illustrates what Jean-Paul Sartrewas referring to in his controversial preface to Frantz Fanon's The Wretched of the Earth, published in 1961: "[...] this irrepressible violence is neither sound and fury, nor the resurrection of savage instincts, nor even the effect of resentment: it is man re-creating himself."

Only in the last decade of the 20th century, with the fall of the Iron Curtain, the collapse of apartheid in South Africa and the noble vision and actions of Nelson Mandela, did sport seem to embrace the spirit of the five interlinked rings of the modern Olympic symbol, a full century after Coubertin had revived the Olympic ideal. Only a few racist supporters persist and they are unanimously seen as backward.

In France this change was exemplified by the team that won the 1998 soccer World Cup. The French politician and writer Alain Peyrefitte wrote in Le Figaro at the time: "France is multiracial and it will remain so. [Coach Aimé] Jacquet is from Forez [a former province of France in the Massif Central], Zidane is from Kabyle [a region of Algeria], Thuram is from Guadeloupe, Barthez is from the Pyrenees, Desailly is African [...] What is the point of relating the lineage of all these marvellous champions? What they have given us is French pride, a gift as a model for the universe."

But after the attacks of September 11, 2001, sport was caught up in the upheavals and impulsions that shook the world, when questions of identity became more rigid once more. The North became convinced that it was sheltering infiltrators from the South in its bosom. The wealthy nations each sought out their own fifth column. The old racist reflexes returned in the confusion and regression that followed.

Given this recent regression, various football coaches and other officials might like to consider what the anthropologist Claude Lévi-Strauss wrote in Race and History (1952), a century after Gobineau's infamous essay.

"By refusing to consider as human those who seem to us to be the most "savage" or "barbarous" of their representatives, we merely adopt one of their own characteristic attitudes. The barbarian is, first and foremost, the man who believes in barbarism."