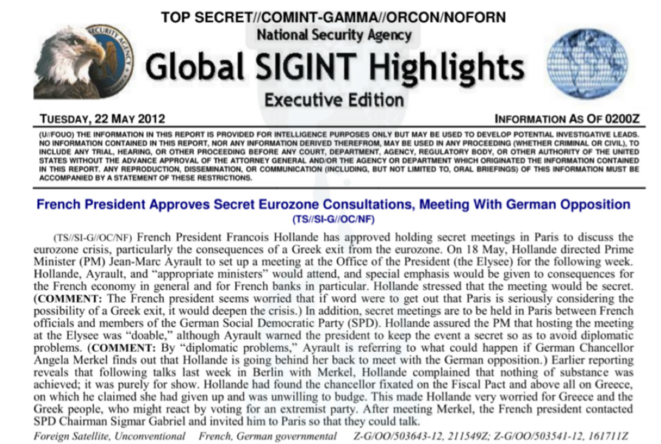 Three NSA reports go back to Nicolas Sarkozy's term of office (2007-2012). The first note was despatched on October 30th, 2008, though it is not at the moment clear whether the report is based on a telephone tap, intercepted messages or conversations with American sources. The NSA describe an all-powerful head of state, who is persuaded that he is the only person who can combat the global financial crisis, for which he holds the American government responsible. “..but [he] believes that Washington is now heeding some of his advice”, notes the report. “In his view it is the first time that the U.S. has not taken the lead in managing a global crisis and France will now take the helm.”

On March 24th, 2010, NSA sends the details of a conversation between France’s ambassador to the United States, Pierre Vimont, and Nicolas Sarkozy's diplomatic advisor at the Elysée, Jean-David Levitte. The subject: the themes that the French president wants to bring up during his meeting with President Barack Obama on March 31st. The conversation shows that Paris is perfectly aware of American espionage. “Vimont conveyed that the French President will express his frustration that Washington has backed away from its proposed bilateral intelligence cooperation agreement and Sarkozy intends to push for closure. As Vimont and Levitte understand it, the main sticking point is the U.S. desire to continue spying on France,” says the report.

Washington is also warned about Sarkozy's close interest in a labelling dispute involving French drinks company Pernod Ricard. “Levitte had not expected to put the labeling dispute with Pernod Ricard (the world's second largest spirits group) on the agenda, but Sarkozy has just spoken to the company's chairman who had asked the president to intercede on his behalf. (COMMENT: Patrick Ricard, chairman of the Pernod Ricard board of directors, is said to be one of Sarkozy's wealthiest backers)”, states the NSA.

One June 7th, 2011, Nicolas Sarkozy telephoned Alain Juppé, his foreign minister. The president makes clear his determination to “go forward with an initiative to restart direct Mideast peace talks between Israel and the Palestinians”. The NSA report reveals that the Americans now know all about the French strategy. “Finally, the president was giving thought to appealing to Russian president Dmitriy (sic) Medvedev for a possible joint initiative without the United States or, as another option, issuing an ultimatum to the U.S. President regarding Palestinian statehood,” it reports.

Jacques Chirac was by now towards the end of his time in office, with just a few months left before his departure from the Elysée. His relations with the United States are tense. In the eyes of Washington he is the man who opposed the second war in Iraq in 2003. On December 23rd, 2006, the head of state discussed nominations to the United Nations with his foreign minister Philippe Douste-Blazy. The American intelligence service picks up on Chirac's lack of regard for his subordinate. “Chirac's detailed orders may be in response to the foreign minister's propensity, amply demonstrated in the past and the impetus behind a number of presidential reprimands, for making ill-times or inaccurate remarks,” says the NSA report in a commentary on the eavesdropped conversation.