June 24, 2015 By Lénaïg Bredoux and Mathieu Magnaudeix
This article is open access. Information protects us. I subscribe

'We're not on a level playing field' 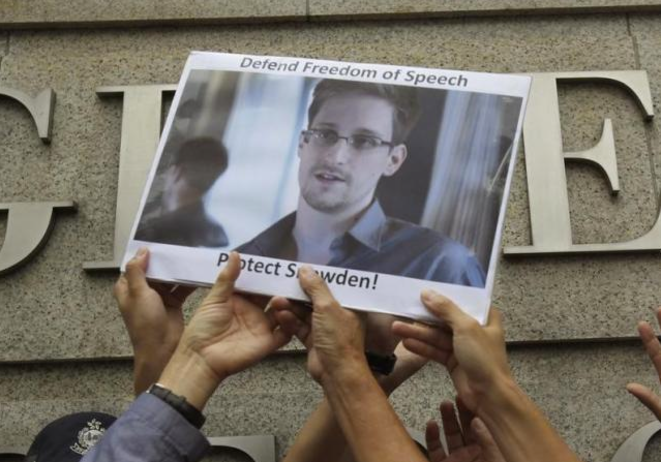 It is true that soon after the Snowden affair broke President François Hollande threatened to suspend talks with the Americans over the US-EU transatlantic trade agreement. “We can have negotiations or transactions once we have obtained guarantees,” he told journalists, calling for “this type of behaviour” to stop “immediately”. This protest for the cameras was, however, swiftly denied by his entourage. “We have to react to the spying revelations because there are press articles. But our room for manoeuvre is very narrow. We're not on a level playing field,” explained one diplomat to Mediapart.

At the time France's socialist government, apparently fearing American reprisals, clearly rejected allowing Snowden to come to France as some intellectuals had suggested. Manuel Valls in particular was firmly opposedto the idea in the name of Franco-American “friendship”. A sign of the nervousness in the corridors of power at the time was the diplomatic incident caused by the decision to stop the plane carrying Bolivian president Evo Morales from flying over France, for fear that it might be carrying the American whistleblower on board.

When in April this year it was confirmed that senior French figures had indeed been spied on by Germany's BND, the French foreign ministry and the Elysée both maintained complete radio silence on the subject. Off the record some French officials had simply let it be known that there had been frank but discreet discussions between Paris and Berlin over the issue. By way of contrast Austria, whose leaders had also been eavesdropped by the BND, chose to make an official protest and even lodged a formal legal complaint.

However, while the French may have known that the German services worked with the NSA, they did not imagine that the BND were operating in effect simply as subcontractors for the American agency. “That's on a different level,” said a source close to the French secret services. “All the more so given that we have an agreement with the BND on sharing intelligence that works well.”

Yet after the revelations by Mediapart and Libération, working in conjunction with WikiLeaks, the French authorities can no longer hide from the issue: three heads of state, the most senior figures in the country, have been spied on for years. Even so, it is quite possible that France's protests and 'polite' condemnations today will not be followed up with concrete action in the future. For one thing France does not want to hurt the Americans, and for another it wants to avoid possible reprisals.

Indeed, as the Snowden leaks showed, France itself spies on other countries even if its resources are limited compared with those of the NSA. “The DGSE [editor's note, the external intelligence agency the Direction générale de la sécurité extérieure] carries out illegal and clandestine actions outside our borders. But unlike the Americans we don't like to boast about it. And the DGSE doesn't have the same means,” says a source close to the French intelligence services. “We've all done wrong things,” says another source. “We carry out targeted operations.”

In 2013 The Guardian revealed that the French secret services had spied on the American Department of State. They were also suspected by the secret services in Canada of having put spy software called 'Babar' – after the cartoon character - on the Canadians' computer networks. Meanwhile the German newspaper Süddeutsche Zeitung revealed the existence of an agreement on information exchange and cooperation, dubbed 'Lustre', between France and the so-called 'Five Eyes' – the United States, Greta Britain, Canada, Australia and New Zealand – who regularly swap massive amounts of data between their intelligence services. The terms of this agreement are not yet known.

On a broader level France continues to intercept electronic signals from, for example, the underwater cables that come from the Middle East and Africa, which are areas very poorly covered by American intelligence. Such data can then be swapped with the NSA or other agencies for intelligence that interests France. “The services know perfectly well that all countries, even if they cooperate in the fight against terrorism, spy on allies,” said the former boss of the domestic intelligence service DCRI (now the Direction générale de la sécurité intérieure or DGSI), Bernard Squarcini, a close ally of Nicolas Sarkozy, in 2013.

The latest episodes involving France's own surveillance law, the loi renseignement, which was due to receive its final Parliamentary vote of approval on Wednesday June 24th, is further proof of how spying on foreign countries and foreign nationals are common practice. The socialist MP Jean-Jacques Urvoas, who is piloting the legislation through the National Assembly, discreetly slipped in an amendment which would have given the French secret services virtually unfettered ability to spy on people in France who are “not French or a person habitually resident on French soil”. In other words, carte blanche to spy on diplomats and foreign journalists and business people. After an outcry the prime minister’s office asked for the amendment to be withdrawn. Such practices may exist, but the authorities do not want people knowing about them.