Six of them belong to the same landlord and are being sold at the behest of the judicial administrator of the Chêne Pointu housing estate. The owner is one of the commune's most infamous slumlords. In the heyday of his real estate empire, he owned 49 apartments in Clichy-sous-Bois, and had built up a debt of 336,155,74 euros in arrears on service charges by October 10th 2009. The property management agency wants to recover these liabilities. Hence the sale of the apartments. Nobody knows exactly how many homes the slumlord still owns, but estimates converge around the figure of 30. Approximately 15 of these are already registered for future sales.

The six apartments, each about 60 m2, are sold occupied. But at a low price, between 3,900 and 5,200 euros per square metre. Each of them, according to a lawyer who addresses the assembly at the beginning of the auction to present the lot, generated a monthly rent of between 880 euros and 1,140 euros.

The bidding for the first lot is launched at 5,000 euros. It will reach 22,000 euros. Buyer: the Habitats Solidaires association. The second will be sold for a bit more to the same buyer. The third appears to attract some more interest: one of the developers slips a few hushed words to Taconet.

"Would you leave that one to me?"

"How would you administer it?" replies Taconet, ironic. 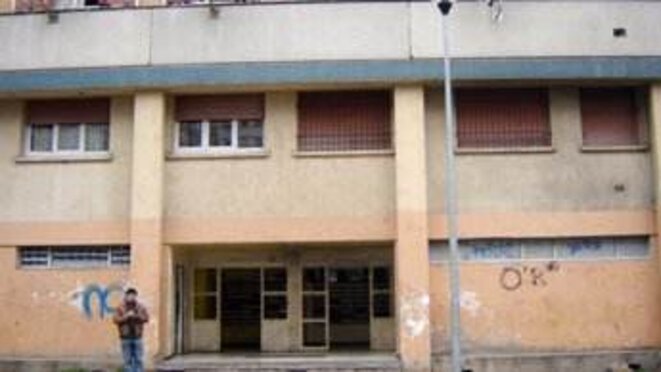 The two men know each other. The real estate developer purchased a property in 2009, which now houses two families. He renewed the lease of this flatshare at the beginning of 2010. Taconet's association managed to extract one of the two families from this overcrowded apartment on January 1st.

Moreover, stresses the Town Hall, this property developer is the owner "of at least three homes" under surveillance by the housing service. He also owes 6,700 euros for service charges on lot 825, adds the municipality, to back up its point. "There are names that ring bells", adds the person in charge of the city town hall's housing service. "There are about 15 of them. Together they own roughly 100 apartments," specifies Olivier Klein, deputy mayor.

The sale resumes. "Going, going, gone." The apartment situated on the fifth floor of a staircase on the Allée Pierre-et-Marie-Curie: 47,000 euros. Buyer: Habitats Solidaires, once again. Morality is intact, but at a cost.

This apartment represented a worthwhile investment for speculators. The tenant was declared to have been there for several years, paying a monthly rent of 1,140 euros. That works out as an annual rent of 13,680 euros for an investment of 47,000 euros - a yield of 30% a year.

‘High profitability guaranteed' would be an apt sales cry for a salesman pedalling such miraculous financial products. Indeed, real estate websites do often highlight this aspect (‘rapid return on investment') in their adverts for properties in Clichy-sous-Bois, stressing ‘excellent rental returns', or specifying certain properties are ‘ideal for an investor'.

But even at 47,000 euros, very short-term profitability is elusive. Here it is a question of making money even faster, before trouble comes along. Developers are effacing themselves behind the ‘philanthropists'. The next three apartments sold at the auction also go to the association for between 25,000 euros and 40,000 euros each. At the end of the day, Habitat Solidaire's bill adds up to 207,000 euros, which will have to be found by turning to others, taking out 30-year loans to be paid back to the Caisse des depots (‘deposit fund office' - a public group serving both the general and economic interest) in a social housing context.