The new Members of Parliament have taken up their seats in the National Assembly following the Parliamentary elections and they consist of new faces, new groups and a new social demographic. Many of them are from a non-political, civic society background, with their own habits, customs and beliefs and bringing with them, too, a desire to circumvent the old political obstacles and delays of the past. But, says Hubert Huertas, this new group may themselves soon end up personifying those very same old political ways.

At first glance the 2017 National Assembly elected in June looks more representative of society than did its predecessors of 2012, 2007, 2002 and so on. Yes, the lower house of the French Parliament lacks MPs who have been manual workers or employees and the upper middle classes are over-represented. The Assembly has 17 graduates of the elite École Nationale d'Administration (ENA) – known as énarques in French - ten former students of the prestigious HEC business school, 34 MPs with doctorates, while there are just five who have the CAP vocational qualification or a BEP diploma – broadly equivalent to a City and Guilds qualification. But the 2017 intake is clearly different: the new MPs elected on 11th and 18th June are younger, lawyers, doctors and civil servants are not the dominant force they once were and above all there are, at last, lots more women.

Following Emmanuel Macron's election as president this growing wave of activists presented themselves before the electorate certain of one thing: “We can change life because we live in the same world as you!”. The new candidates' appeal was their experience in civic society and also their lack of experience in the political world, which promised an element of newness and change. These were not simply professional politicians endlessly renewing their mandate. As the expression goes, they had clean hands because they had no hands. 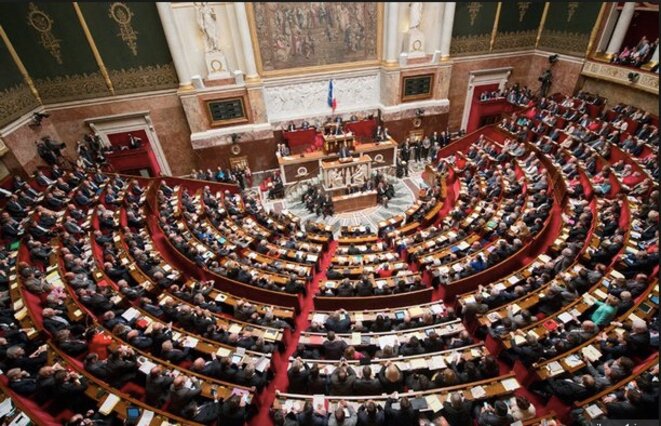 This new band of would-be MPs came not from the world of elected representatives but from “civic society” and this label became their key argument as La République en Marche (LREM) candidates. As they had never been elected they would do better than those who were simply seeking to cling onto their seats. As they were new they would take the place of the old ones. As they had no experience they wouldn't be afflicted by political inertia.

They bravely rocked the boat and the result is there for all to see: they won, and on Tuesday June 27th, they trooped one by one into the Assembly to carry out their first revolutionary act: though a woman had been expected to get the job, they instead voted for a man to become the new Speaker of the Assembly, in the form of François de Rugy, that exemplar of political flexibility. This is a man who knows the music because he has played every instrument: from environmental activist to environmental dissident, from co-president of the environmental Europe Écologie group in the Assembly to one of its co-destroyers, from a supporter of the government under prime minister Manuel Valls to being one of the latter's opponents in the Socialist Party presidential primary contest. He then became a Macron supporter at the decisive moment. In this particular speciality, he is a specialist.

However, the contradictions that will shape Macron's Parliamentary majority are deeper and more inevitable that such incidental events. In the euphoria of the victory, the “civic society” that has just taken up occupancy in the Assembly doubtless imagines that it has crushed “political society”. But it is deceiving itself. It has only replaced it. These men and women will themselves become “the political society” and will find out that the France whose representatives they now are is not like an enterprise of which they were an executive or director. They can, of course, fool themselves and speak in the language of start-ups and take part in “team building” exercises, but it won't last long. Reality is just around the corner.

We had a first taste of this on Monday June 26th. The minister of agriculture, Stéphane Travert, was doubtless looking for a good way of managing his sector when he called for a relaxation in the use of pesticides that are said to kill bees. He came up against the environment minister Nicolas Hulot who stood firm on his environmental policies, and it was left to the prime minister's office to make a decision.

Such occurrences will only increase in number. The very idea of “de-politicising” the conduct of public affairs, in other words reducing it to a balance sheet, a figure at the end of a column, is in itself a form of ideology, and will meet with resistance. Politics is the search for common interest among opposing forces, not simply the sum of group interests defended by all kinds of lobbies. There are also values, moral demands, common justice that must be delivered, and the new MPs from “civic society” will find that out in their turn.

Like the new president who spent time in banking, many of these new MPs come from the private sector, which is not a fault in itself. But the private sector has got considerably larger over the last 30 years and with it has come a dominant idea: that the fewer regulations there are, the better things are. This notion of deregulation, called “freedom” by some, is also the watchword of Macron's planned employment law.

Faced with this ideology the political world, which is supposed to represent the general interest, has itself gone in the opposite direction. At the start of the 1980s politicians did more or less as they wanted in their political dealings. The first laws on political financing, under socialist prime minister Michel Rocard (1988-91), started to regulate the profession, if one can put it like that. Other laws followed in the wake of revelations that became scandals. Today the boss of a small company can employ his or her spouse, daughter, son or grandmother and it would not be seen as an ethical problem. If they run a large group they can also receive shamelessly large salaries. But politics is not allowed such things. The more that civic society demands and receives deregulation in relation to its activities, the more that political society admits that it needs greater monitoring, even if its arm has to be twisted.

It is thus quite interesting to see the arrival in Parliament of a ruling party whose two first acts will be completely contradictory. On the one hand there is the new law on conduct in public office which will impose strict rules on the National Assembly, to give credibility to Parliamentary work. On the other is a new employment law which will lift controls across society in the name of economic efficiency. In one case we are opening our eyes to possible abuse, in the other we are closing them. On one side is a law aimed at ending scandals, on the other a contract to let them prosper, as if there were two separate societies within France; political society which advances under the law, and civic society which renews itself by abolishing the law.

The MPs from the ruling La République en Marche (LREM) are the first representatives of this split personality. They have even a theory underpinning it as, according to their boss Emmanuel Macron, they are at the same time on the Right and the Left, upper and lower, the majority and also a large part of the opposition, the servants of the law and “at the same time” its fierce opponents.

Good luck to them and their doubles.