A recent video showing a pupil pointing a pistol – later discovered to be fake - at his teacher in a school in France went viral. The government called an urgent meeting of senior ministers to work out a plan of action to tackle violence in France's schools, amid talk that the police might be asked to patrol in some establishments. Detailed policies are expected to be announced soon. But as Manuel Jardinaud and Faïza Zerouala report, this tough rhetoric, which recalls the days of Nicolas Sarkozy's presidency, has not gone down well with many teachers.

It was a shocking scene and the video quickly went viral on the social networks. It showed a 15-year-old pupil taking aim at his teacher with a BB pistol at the Édouard-Branly secondary school at Créteil in the south-eastern suburbs of Paris on October 18th. The weapon turned out to be a fake but the teacher did not know that at the time. And since the video was first broadcast on October 20th it has provoked strong reaction in both the political and educational worlds.

The education minister Jean-Michel Blanquer, who never misses a chance to portray himself as the “teachers' minister”, called the media to a press conference at the Ministry of Education on Sunday October 21st. But, under pressure, prime minister Édouard Philippe and the rest of the government did not stop there and soon all the political heavy infantry were summoned into action in a bid to reassure the public that something was being done. President Emmanuel Macron demanded quick policy proposals and a strategic committee met for the first time on Friday October 26th, bringing together Blanquer from education, the new interior minister Christophe Castaner and justice minister Nicole Belloubet. 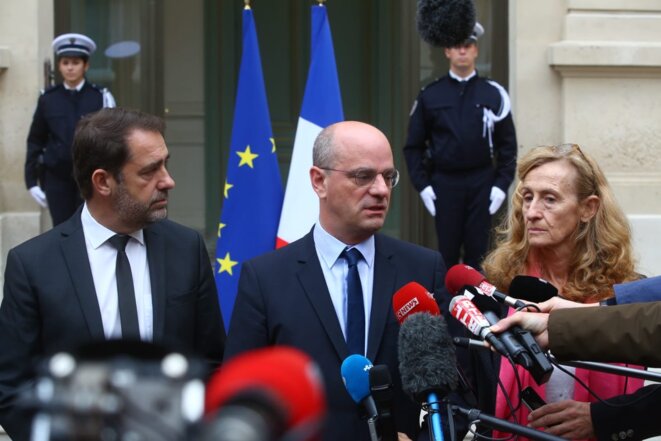 Reacting to the video: interior minister Christophe Castaner, left, education minister Jean-Michel Blanquer and justice minister Nicole Belloubet. © @Twitter @jmblanquer
On the eve of the meeting Castaner sought to lay down a marker by saying he did not rule out the possibility that police officers could be deployed inside some schools “at certain moments of particular tension in the day” and “obviously with the agreement of the head of the establishment”. The interior minister said that school had to be a “place of sanctuary, protected … our teachers need to be protected and also our pupils too from this unacceptable violence”.

This approach, which recalls that taken under the 2007-2012 presidency of Nicolas Sarkozy, was combined with other proposals – from the education minister - such as the possible creation of “specialist establishments” for 13 to 18-year-olds that would involve educational staff but also personnel with a “military or police” background. The justice minister Nicole Belloubet raised the possibility of more work of a “general interest” in schools which would have “strong educational value”.

However, the government's tough language and policy suggestions have already met with opposition among some in the world of education. In an article published on the Huffington Post website, teachers at the school at the centre of the controversy, Édouard-Branly in Créteil, said they were worried by the government raising the school security stakes and warned against the dangers of a crackdown. The teachers warned of: “Those politicians who demean themselves by seizing upon events and who encourage radical and extreme reactions while dreaming of a security crackdown.”

In displaying this toughness education minister Jean-Michel Blanquer was seeking to redeem himself over an earlier blunder. In an interview with Le Parisien, he had proclaimed the government's new policy of banning mobile phones in schools, in order to stop such videos being taken in the future. It was widely seen as a clumsy comment, which attracted irony and scorn from a fringe group of teachers.

Much of the government's energetic response to the video is doubtless due to the public pressure exerted by some teachers via the internet. Thousands of teachers used the hashtag PasDeVague ('Don't make waves') to express their unhappiness at the violent situations that some have faced in the classroom. In particular they complain about the lack of support they get from the educational system, both directly from school principals and also from the heads of local educational authorities, whom they claim prefer to bury the facts.

However, the head of a middle school in one of the country's education priority zones to the west of Paris, who asked to remain anonymous, gives a more nuanced view. He says there are “lots of fantasies” out there from teachers who “imagine that school heads might not want to hold disciplinary committee” meetings to deal with pupils who cause trouble. In reality, he says, the picture is far more mixed. “Yes, there are some heads who don't accept their responsibilities and let some pupils do anything and sometimes some teachers are abandoned by their superiors. But it does happen that those same [teachers] reject all authority on the the part of their principal or director,” says this principal.

The PasDeVague hashtag has mixed up good and bad elements of the debate. The way that some political groups – especially those on the extreme right – have exploited the episode has blurred the message and the sincerity behind the many social media posts. Anne Anglès, who taught history and geography at another secondary school in Créteil, Léon-Blum, for 26 years before teaching in central Paris, is uneasy about the #PasDeVague movement, which for her has been about “letting off steam”. She says: “It's impossible to verify the truth of these accounts, to obtain proof and to be sure that the management has not responded.”

Even worse, from her point of view, is the way some colleagues have portrayed pupils. “They see the pupils as enemies,” she says. “In fact our challenge is to stand alone in front of these 35 pupils and manage to create a learning relationship and to pass knowledge on to them.”

Adrien Viallet-Barthélémy, who teaches French at the Maurice-Utrillo secondary school at Stains in Seine-Saint-Denis, north of Paris, points out that the incident in Créteil was highly unusual, even if similar events did occur at Le Havre in northern France in early October. He thinks the authorities should listen to those teachers in difficulty in their classes who have “had enough”. The complaints put on social media are similar to those to be heard in staff rooms, even if some events might have been exaggerated, he says. “But it mustn't come across as if the pupils are the main problem,” says Adrien Viallet-Barthélémy.

Benjamin Moignard, a member of the school violence watchdog, the Observatoire International de la Violence à l'École (OIVE) and a lecturer at Paris-Est-Créteil Univesrity, has also watched the social media reaction to the classroom incident at Créteil with close attention. “The success of the hashtag reveals the feeling of isolation that can overcome some teachers,” he says. “Solidarity between adults in the establishments doesn't necessarily work, even if it does sometimes exist despite everything.”

Staff can however come together and show solidarity with each other when they confronting the school's principal, Benjamin Moignard says. And he is critical of the way some teachers online have come close to flirting with conspiracy theories. He thinks it is going too far to think that every principal or director of a school would knowingly conceal violent episodes in order to avoid damaging their reputations.

Meanwhile the various teaching trade unions have been busy issuing statements on the issue. The main unions, such as the SNES-FSU, have been calling for more staff, in particular more in-school education advisors to deal with this apparent rise in violence. The unions say this is especially necessary given that secondary schools are no longer part of education priority zones and do not get the funding advantages that results from that. SNALC, a teaching union considered to be on the Right, is calling for more support from school management. In the French Parliament right-wing MPs, who have been largely inaudible for some months, have been trying to make political capital out of what is one of their perennial themes, that of law and order.