It began with an article published by Mediapart. Now it has become known in France as l'affaire Karachi and dubbed 'Karachigate' by the international press. It is potentially one of the biggest French political scandals of the past two decades, engulfing President Nicolas Sarkozy along with a former president and two ex-prime ministers. Here we present a simple Q & A guide to help understand a complex and fast-moving story involving multi-billion-euro arms deals, political funding, shell companies, shadowy intermediaries - and the murders of 11 French naval engineers.

It began with an article published by Mediapart. Now it has become known in France as 'l'affaire Karachi' and dubbed 'Karachigate' by the international press. It is potentially one of the biggest French political scandals of the past two decades, engulfing President Nicolas Sarkozy along with a former president and two ex-prime ministers. It's a complex and fast-moving story involving multi-billion-euro arms deals, political funding, shell companies, shadowy intermediaries - and the murders of 11 French naval engineers. Here, Michael Streeter presents a clear 'questions and answers' guide to the affair, followed by a chronology of the main events.

Question: Why is it called the Karachi affair?

Because it centres around the murders, on May 8th 2002, in the Pakistani port city of Karachi, of 11 French naval engineers who were killed when a suicide bomber drove a car packed with explosives into the side of their minibus. Three Pakistani nationals, including the bomber, also died in the attack.

The engineers, employees of the French naval construction company DCN, were in Karachi to help build one of three Agosta 90B submarines sold by France to Pakistan in a deal concluded eight years earlier. 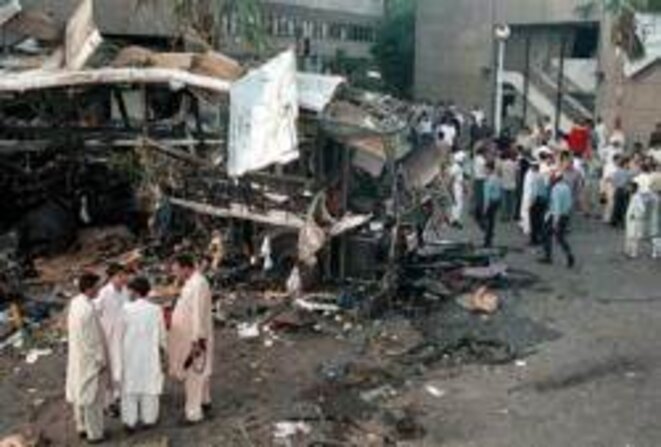 Wreck of the DCN engineers' bombed minibus. © Reuters
Their unsolved murders are the object of an ongoing official investigation in France, led by an independent magistrate. Both the Pakistan and French governments initially blamed al-Qaeda. However, that theory has now been cast aside by the French investigation, which is currently focussed on a very different lead that is causing significant embarrassment among France's political establishment.

Q: So what makes it become 'an affair'?

In short: because the investigation into the engineers' murders has uncovered strong evidence that the sale of the submarines involved money-laundering to fund a French political campaign in which Nicolas Sarkozy, well before he became president, was a key figure. While he has denied any involvement in the alleged scam, the incidents of official obstructions in providing information to the magistrate investigating the engineer's deaths have served to increase suspicions of a cover-up. Evidence from the investigation also suggests, but does not prove, that the murders of the engineers was indirectly the result of a high-level political spat in France which led to the source of the illegal party funds - bribes paid in Pakistan - being cut-off.

In detail: The magistrate investigating the engineers' murders is currently focussing his investigation on the theory that this attack was ordered in reprisal for a decision by French president Jacques Chirac's government (1995-2002) to cancel significant 'commissions' - in reality bribes - owed on the sale of the three submarines.

Although now outlawed by an international agreement, the paying of bribes in 1994 was legal and widespread to secure arms sale agreements. In this case they were paid to high-ranking local intermediaries, and were staggered over a period of time.

Chirac's order to cancel the outstanding payments on the Agosta submarine deal has been confirmed in testimony by his then-defence minister, Charles Millon, along with other witnesses.

Millon said Chirac was keen to purge immoral behaviour. The former defence minister said he had an "intimate conviction", following a review of the contract, that some of the vast sums of money set aside for bribes were actually re-routed back to France, via intermediaries and offshore structures. Unlike the payment of bribes to local intermediaries, which was then legal, it was illegal for bribe money to return to third parties in France. 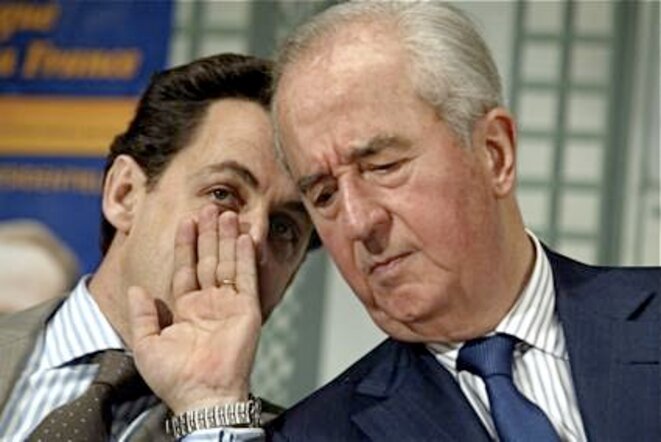 Denials: Nicolas Sarkozy and Edouard Balladur. © Reuters
The key allegation is that these so-called 'retro-commissions', bribes destined for Pakistan but ultimately cashed in France, were to help fund the failed 1995 presidential campaign of Edouard Balladur, a centre-right politician, rival of Chirac, who was prime minister when the submarine deal was signed. This would mean, in effect, that French public funds were secreted into the coffers of a political party via obscure financial structures.

This allegation becomes even more important by the fact that the current French president, Nicolas Sarkozy, was Balladur's budget minister in 1994, and his election campaign spokesman in 1995 (see further below). It is argued, not least by the relatives of the dead engineers, that it would have been impossible for Sarkozy not to have been involved in organising the alleged illegal funding of the campaign via retro-commissions. Both men deny the allegation.

But what creates the 'affair' is the fact that until only recently (see further below), the Karachi blast was officially blamed on terrorism, while the stack of evidence that links it to the non-payment of bribes was shelved - until an examining magistrate uncovered part of it. The suggestion is that the real reasons for the attack on the engineers were known and kept secret within the corridors of power, suppressed from the families and public at large to avoid revealing a shameful political scam.