Contrary to what he has stated, President Emmanuel Macron's chief of staff Alexis Kohler has not always revealed his family links to the Mediterranean Shipping Company (MSC), and in his duties as a senior public servant has not always stood aside from issues involving the giant Italian-Swiss shipping firm. Official documents from the major French port of Le Havre, seen by Mediapart, show that Kohler took part in discussions and votes concerning the company while he sat on the port's Supervisory Board as a civil servant from 2010 to 2012. Laurent Mauduit and Martine Orange investigate.

The issue clearly intrigued a member of France's ethics committee for public servants back in 2014. At the time Alexis Kohler, a senior civil servant who is now President Emmanuel Macron's chief of staff, was asking for permission from the civil service to join the massive maritime transport firm the Mediterranean Shipping Company (MSC). On the June 2014 declaration an anonymous hand has underlined the words 'Grand Port Maritime du Havre (GPMH)' - or Major Seaport of Le Havre as it is known in English - as if to attract attention to Kohler's silence on the issue.

For in their declarations Alexis Kohler and his immediate boss Rémy Rioux, who vouched for him, seem not to have enlarged on Kohler's role between 2010 and 2012 as an official representing the French state on Le Havre port's Supervisory Board. In 2014 the ethics committee ruled against against Kohler's private sector move to MSC, referring simply to his previous role as a state official on the board of the STX France shipyard. But at no time did it refer to his time on the Le Havre Supervisory Board. This is a port where MSC, the world's second-largest maritime transport company, plays a significant role not just as a client of the port but also as an important operator in its own right, as it controls two of its terminals. 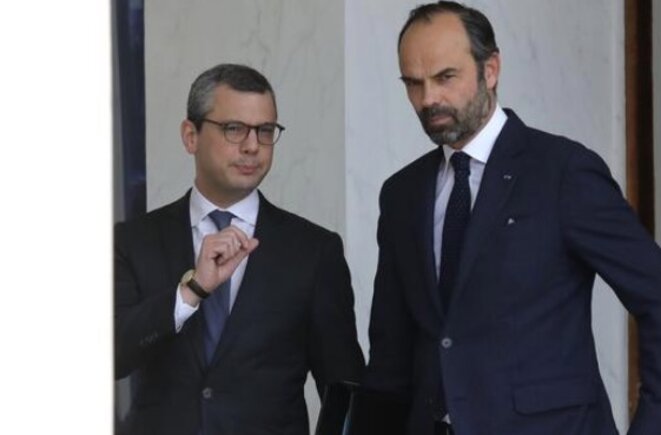 Chief of staff Alexis Kohler and prime minister Edouard Philippe, who were both members of the Le Havre Supervisory Board from 2010 to 2012. © LCI
The reason for this silence, this oversight, is doubtless contained in the documents now obtained by Mediapart. This website asked to see the minutes of the GPMH's Supervisory Board for the period that Alexis Kohler sat on it as a state official, having been sent there by the body that oversees the French state's investments, the Agence des Participations de l’État (APE).

These documents raise questions about the approach taken by Alexis Kohler, whose official title now is secretary general of the Élysée and who is facing a preliminary investigation by the financial crime branch of the French public prosecutor’s office, the PNF. They reveal that when he sat as a state official on Le Havre port's Supervisory Board, Kohler at no time informed the other members of the board of his family links to MSC. As Mediapart has revealed, Kohler's mother is a first cousin of Rafaela Aponte, co-founder and chief shareholder, along with her husband Gianluigi Aponte, of the maritime transport group. 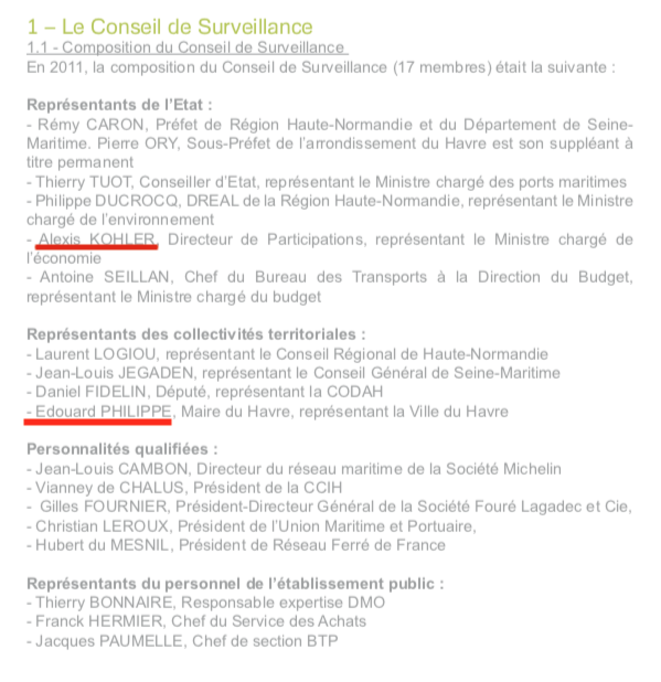 Extrait du rapport financier du Port du Havre de 2011
Among the members of the board at the time was the then-mayor of Le Havre, Édouard Philippe, now Macron's prime minister, as shown in a list (see left) of members of the board in the annual report of 2011. Questioned about whether Alexis Kohler had informed the Supervisory Board about his family links to MSC, the prime minister told Mediapart that he has “known Alexis Kohler for a long time and has always admired his great integrity, his sense of civic duty and his strong work serving the general interest.” Édouard Philippe had already made the same comments in June when the prosecution authorities announced the opening of their preliminary investigation. As for the duties carried out by Alexis Kohler at Le Havre, the prime minister told Mediapart that he had “no comment to make specifically on his position on the Supervisory Board at the maritime port of Le Havre”.

But the minutes of the GPMH or Major Seaport of Le Havre Supervisory Board are quite clear. Kohler never stepped aside when an issue involving MSC was being considered by the board. He took part in all deliberations, including those concerning the Italian-Swiss shipping company. At least once he even voted for a measure involving public money that was favourable to MSC.

Alexis Kohler and the Élysée have, however, consistently denied any conflict of interest and have insisted that the public servant's family links with MSC were always fully disclosed as required by the law. “In all his successive positions in the state Mr Kohler has always informed his hierarchy, as well as those of his colleagues who needed to know, of his family links,” the Élysée said after the initial investigation by Mediapart. “These personal links were known to the Committee on Ethics in Public Service; Mr Kohler has never found himself in, or been placed in, a position as a decision maker or in a situation to assert a personal opinion on the internal workings and deliberations concerning MSC,” said the Élysée. “This remains the case for the present as it does for the future; Mr Kohler has always respected the decisions of the ethics committee.”

Today that first line of defence by the Élysée on behalf of Alexis Kohler looks to have been undermined. After the Benalla affair – which involves President Macron's personal bodyguard Alexandre Benalla beating up protestors – these new revelations will comes as a fresh blow to the presidency, amid allegations of conflicts of interest and failures to respect rules and the law.

STX France and the port of Le Havre - problematic posts

When he was promoted to assistant director of the state body the APE in 2010, taking over responsibility for the audiovisual and transport briefs from Rémy Rioux, Alexis Kohler must have been aware of the potential conflict of interest he faced over two cases – STX France and the GPMH or Major Seaport of Le Havre. In the first instance the French state was a shareholder, and in the second case the body involved was a publicly-owned body. Both involved public money. But both establishments were also important for MSC, which was looking for major financial support from the French state.

The fact that Alexis Kohler was handed a brief that included these two cases raises some key questions. Assuming they knew, as is claimed, why did his superiors give him a position that exposed him to such potential conflicts of interest? Did his superiors consider the risk of conflicts minimal and not worth changing the way the APE functioned? The answers are not clear at this stage.

On two occasions, in 2014 and 2016, Rémy Rioux, who was Kohler's boss first at the APE then as chief of staff to finance minister Pierre Moscovici, officially vouched for Alexis Kohler at the ethics committee when the latter wanted to join MSC. “I affirm that in the context of his work, Mr Kohler has never exercised any control or supervision, has not concluded any contracts with nor proposed any decisions relating to the operations carried out by the company MSC … which he wants to join, nor by its subsidiaries,” he wrote to the committee. In his statement Rémy Rioux was careful to refer only to the period when his colleague was his deputy in Pierre Moscovici's office but did not speak of the previous period when they were both at the APE.

As for Alexis Kohler himself, while he was eventually given the go ahead in 2016 to work for MSC, he had his own personal responsibility in the case. Why did he agree to sit on the board at STX France, which had become a very sensitive political subject, knowing that MSC was at the time virtually the only customer for the shipyards based at Saint-Nazaire in west France? And that at some point the question of state aid would arise? Subsequent events showed how favourable this aid was to MSC, as the state in effect played the role of its banker. The shipping company benefited from around 1.5 billion euros in financial guarantees signed by the state.