The Swiss canton, or state, of Geneva has launched legal action aimed at forcing the closure of the ageing, accident-prone French nuclear plant at Bugey, which lies just 70 kilometres from the border with Switzerland. The lawsuit is for “the deliberate endangering of lives” and “water pollution”. If successful, this extraordinary move could encourage other countries bordering France and its network of 58 nuclear reactors to take similar action. Agathe Duparc reports from Geneva where the local authorities presented their case at a press conference on Monday.

At the Palais Eynard building, which houses the city of Geneva’s administrative council, the mood among the councillors on Monday was one of determined combat. The authorities of the canton (or state) of Geneva, and those of its capital city, had gathered for a press conference to present their legal action to force the closure of the French nuclear power plant in Bugey, situated just 70 kilometres south-west of the Swiss city. 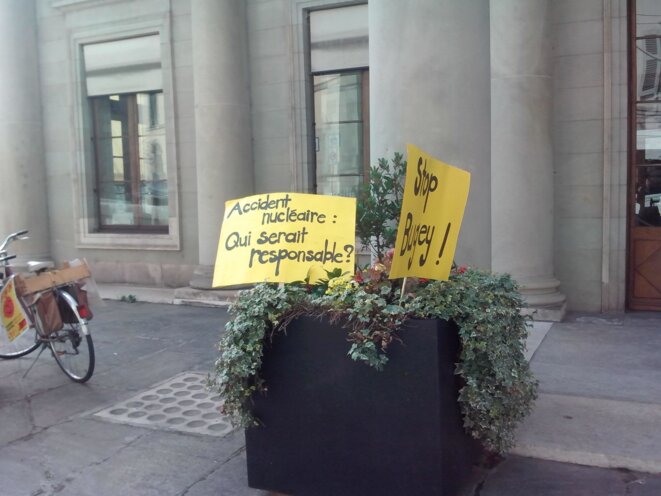 Outside the Palais Eynard on Monday, where one placard asked 'A nuclear accident: who will be responsible?' © AD

The lawsuit cites “the deliberate endangering of lives and pollution of water” by the continued operations at Bugey, one of France’s oldest nuclear sites - its first reactor went onstream in 1972 - and which has suffered numerous technical accidents over recent years.

“Since March 2nd, we have launched into a large-scale legal battle,” said Geneva mayor Esther Alder. “We say to the inhabitants of Geneva that we absolutely want the closure of the [Bugey] nuclear plant where incidents have multiplied.”

The Bugey plant, which lies on the banks of the river Rhône, close to the city of Lyon in south-east France, has four nuclear reactors.

France has a total of 58 reactors spread across 18 power plants, three of which are situated on its eastern borders and three others on the Channel coast. Last Friday, two days after the Swiss legal action was first announced, the German government repeated earlier calls for France to shut down the nuclear plant at Fessenheim, another accident-prone site which entered service in the 1970s

At the press conference in Geneva on Monday, mayor Esther Alder underlined that the canton’s combat with the nuclear industry was not a recent one. In 1986, a referendum on energy supply saw a majority vote against sourcing electricity from nuclear power, prompting the canton authorities to oppose the construction of any new nuclear plant in the region. The constitution of the Geneva canton (also, like three other Swiss canton’s, called a republic), makes clear, in its Article 169 , that “the cantonal authorities oppose, with all means at their disposal, and within the limits of their competence, the installation of nuclear power plants, the deposit of radioactive waste and nuclear reprocessing plants on the territory and neighbourhood of the canton.”

Councillor Antonio Hodgers, responsible for energy issues in the canton, said the “ageing nuclear technology” at Bugey was “a major risk for our population”. He drew attention to the canton’s pledge that by 2017 its electricity supply will be sourced only from renewable energy systems. “If there exists real political will, we can get by without nuclear power,” he said. “Geneva is the proof.”

Municipal administrative councillor Rémy Pagani, a former mayor of Geneva, pointed out that in the event of a major incident at Bugey, Geneva would be within the “evacuation zone”. He strongly attacked French utility giant EDF, which operates the Bugey plant, over its proposition of renovating what he called “this old saucepan”, the cost of which he said was estimated by the French national audit court “at almost 100 billion euros”.

Pagani, a member of the left-wing SolidaritéS movement, slammed French environment minister Ségolène Royal’s recent statement in support of prolonging the lifespan of the Bugey plant by ten years. “These comments are extremely serious because we’re not talking about an old 2CV [Citroën car] but of an infernal machine that places people’s lives in danger,” he said.

Pagani underlined that the Geneva authorities were also campaigning for the early closure of five Swiss nuclear plants, including Mühleberg, an ageing site that is due to be taken off-stream in 2019. Following the disaster at the Japanese plant of Fukushima in 2011, Switzerland’s federal authorities announced that those reactors due to end service by 2022 would not be renewed. 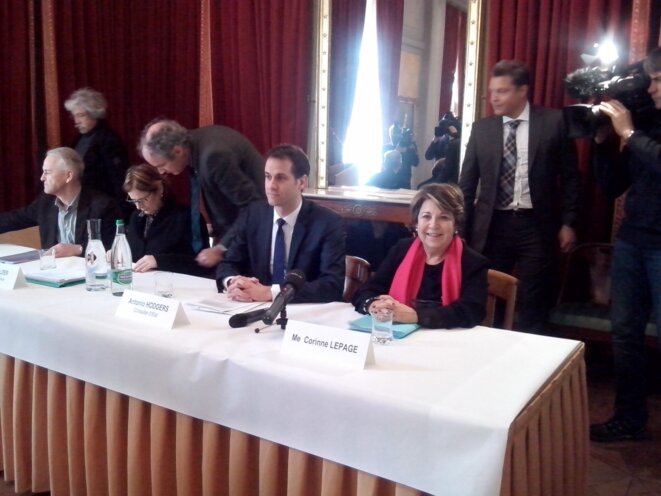 The lawyer leading the Geneva legal action is former French environment minister Corinne Lepage, who described the threat Bugey represented as both “extrinsic and intrinsic”. She said the plant was built on land situated in a zone that was prone to seismic activity and flooding and that no proper study had been made of the dangers because at the time of its construction, beginning in 1965, there was no legal requirement. “There are considerable risks linked to the implantation of the site and against which nothing can be done,” she said, adding that it was the scene of “increasing dysfunctions”.

She drew attention to the problem identified by the French nuclear safety authority, the ASN, concerning the concrete protection built around the Bugey plant’s base, designed to protect the groundwater table below, which in its current state may not resist a serious incident such as a reactor meltdown. EDF, questioned about the issue by the ASN, said the financial costs of removing the potential danger were prohibitive.

Lepage also spoke of the “recurrent leaks of tritium” recorded by the ASN in 2012, 2013 and 2015, leading to its decision that Bugey’s reactor N°5, then undergoing maintenance work,  should not be put back in service.

“Nobody can argue that if there is a major problem the Swiss aren’t concerned,” said Lepage, who appeared confident that the legal action she is leading will be more successful than previous legal challenges mounted by Geneva. In 2014, the canton and city authorities lost their case against the installation at the Bugey plant of a site for the containment of radioactive waste extracted from the dismantlement of Bugey’s oldest reactor and eight others in France.

Unlike that case, the current legal action comes under criminal law. “It won’t be rapid because the health safety branch of the Paris court is not known for the swiftness with which it manages cases,” she warned. 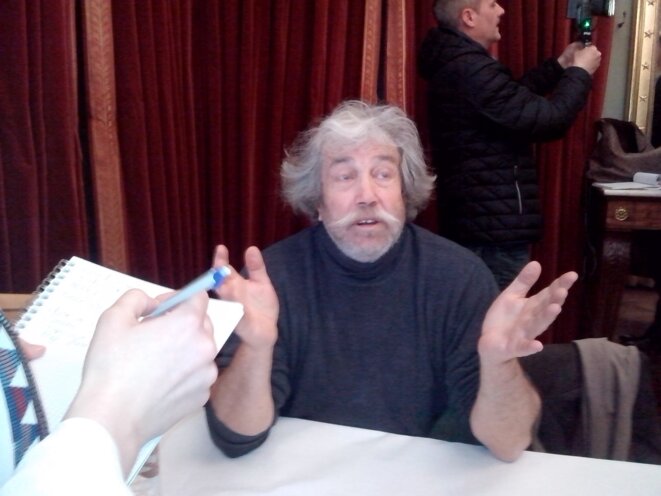 Importantly, four individuals who live close to the Bugey plant in France are also cited in the action, without whom the case could be thrown out. One of them, Claude Cassé, whose home lies five kilometres from the plant, attended the press conference in Geneva this week. “Whether one is five kilometres away or in Geneva, it is practically the same problem in the event of a serious accident,” said Cassé, who is a member of a local environmental association.

Following the launching of the legal action, French environment minister Ségolène Royal announced that the Geneva authorities are invited to attend a “public information commission” meeting into the safety issues at the plant, to be held at Bugey on April 4th and chaired by the regional prefect. “We will examine the lawsuit, but what is clear is that [the issue of] safety is the remit of the Nuclear Safety Authority,” she said.

Sources close to the Swiss authorities said they had hoped to be invited to a higher-level meeting with French government representatives in Paris. So far, Rémy Pagani is the only one to have received, from EDF, an invitation to attend the April 4th meeting at Bugey. “If it’s public relations officers who invite me, I will of course not go there because we already have the information [about the plant] since a long time ago,” he told Mediapart.

Meanwhile, German media reported last week that an accident in 2014 at the Fessenheim nuclear plant, lying on the border with Germany and close to Switzerland, was more serious than had been officially announced. The reports said its electrical control system was put out of action by a water leak, causing an emergency shut-down of one of its two reactors.

"The incident shows once more that there are good reasons for our demand that the French government takes Fessenheim off the grid," commented German environment and nuclear safety minister Barbara Hendricks.

The French government has pledged to cut reliance on nuclear energy for its electricity supply from just more than 75% to 50% by 2025, which will involve the decommissioning of 24 reactors.