Further down the document is a more explicit series of bullet-point notes (see below): “Cannot stop now too late for me, I owe people money and commitments. […] People sitting in office asking for money.  […] Sushen, he promised because you promised. […] People [are] demanding what do we do? […] Those people will, if we don’t pay, put us in Jail and RIL [Reliance Industries Ltd] will exit – then we are really finished, deal scrapped as per commitment of RM [editor’s note, defence minister Rakhsa Mantri] in Parliament.”

An extract of notes prepared and last recorded on September 7th 2012 found in the archives of Sushen Gupta. © Document Mediapart

The intermediary saw no risk in the payments, noting: “Cash from elsewhere, not connected. What is the worry?” He also suggested to Dassault to ask for a contribution from its Indian industrial partners: “What have other Indian companies done to deserve the work?”

While Dassault offered no comment about the notes or the existence of a meeting with Sushen Gupta, the latter did not respond to Mediapart’s attempts to contact him.

What is established is that Gupta continued to be a strategic consultant for Dassault and that, three years later, he obtained confidential Indian defence ministry documents about the Indian negotiating team’s position on the Rafale contract.

In 2014, the negotiations over the Rafale contract became bogged down, notably because of disagreements between Dassault and the state-owned aerospace and defence corporation HAL.

On May 12th 2014, the Indian National Congress party lost power in the country’s general elections and Narendra Modi, head of the ultra-nationalist Hindu BJP party, became prime minister. In a note he sent to Dassault, dated June 24th 2014, Sushen Gupta raised the possibility of a “meeting with Indian political high command”. Clearly well informed, he also reported that the Indian defence minister was to be replaced “before end of July”. In the event, the minister was replaced that November. The delivery of the first of the 36 Rafale fighters to India on October 8th 2019. © Dassault Aviation

On April 10th 2015, following a meeting in Paris with then French president François Hollande at the Élysée Palace, Indian Prime Minister Narendra Modi made the surprise announcement that the tender for 126 fighter jets had been overturned, and that India now wanted to purchase 36 Rafale jets, built in France and “ready-to-fly”, in a contract to be agreed between the two states.

It was a major turnaround; the state-owned company HAL was removed from the deal as was also Mukesh Ambani’s group Reliance Industries Ltd. The latter was replaced by the group Reliance ADAG, owned by Mukesh Ambani’s brother Anil Ambani, a close acquaintance of Modi (see more in Mediapart’s previous investigations here  and here ).

One of the key issues was of course the purchase price of the aircraft. On May 13th 2015, the Indians demanded, as France had promised, that the cost of the Rafale jets should be the lowest ever offered by Dassault. The Indians had a trump card to play, which was that in July 2014, the European consortium Eurofighter, which lost out in the original tender, had presented a new offer to India, knocking down the price of its Typhoon jets by 20%.

The situation rapidly became a confrontation between the two sides. After performing complex “benchmark” calculations, the Indian negotiators concluded, in a confidential report dated August 2015, that the overall purchase price for the Rafale jets, including their weaponry, should be 5.06 billion euros (see the document below). But in January 2016, Dassault proposed more than double the price: 10.7 billion euros, and excluding the missile equipment. 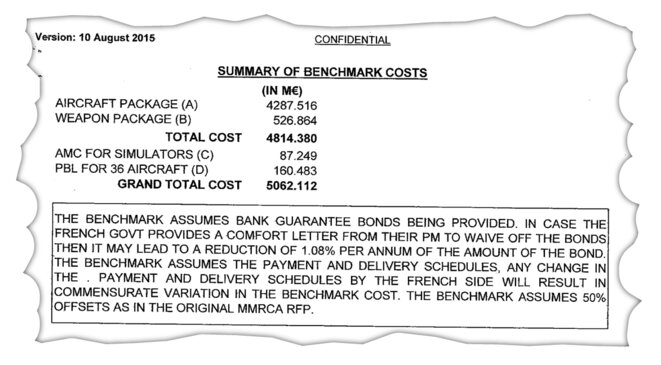 The detail of the calculations of the “benchmark costs”, the justified cost of the Rafale purchase, as estimated by the Indian defence ministry negotiating team on August 10th 2015. © Document Mediapart

For the French camp, Sushen Gupta’s assistance was to prove precious. According to information gained by Mediapart, he obtained confidential documents from the Indian defence ministry on the subject of the dispute over the purchase costs (see below). These included the minutes of meetings by the Indian Negotiating Team (INT), the arguments they had prepared to present to the French, and detailed notes on the calculations of the costs (“benchmarking of costs”) and the methodology employed. Gupta even obtained an Excel sheet created by one member of the INT for calculating the purchase price (“price benchmarking”). 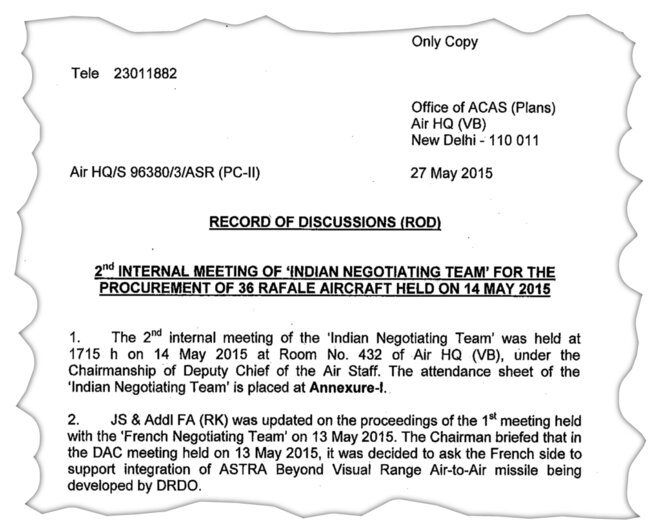 The minutes, or “Record of discussions”, as drawn up by the Indian defence ministry’s negotiating team (INT) of the second meeting of discussions. © Document Mediapart

The intermediary also obtained the complete contents of the revised Eurofighter offer as it had been presented by Airbus (a member of the consortium) to the Indian defence ministry in July 2014 (see an extract of this below). 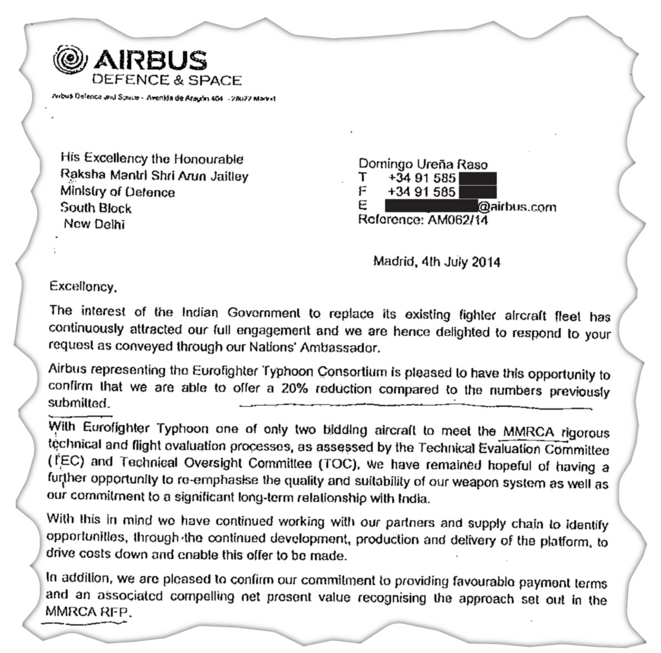 Questioned by Mediapart about the documents obtained by Sushen Gupta, the Indian defence ministry did not respond.

The intermediary had gathered all the information needed for the French to counter the Indian team’s demands. He took an active part in Dassault’s strategy, calculating on computer spreadsheets what the best deal might be. On one of these, created on January 20th 2016, one of the columns concludes a suggested overall purchase cost of 7.87 billion euros. That was precisely what the French negotiating team proposed to the Indians during a negotiations meeting the following day. But the Indian side again demanded a lower price, and after the French refused, the meeting was called to an abrupt end.

Four days later, on January 25th 2016, then French president François Hollande was in New Delhi to sign a protocol agreement with Indian Prime Minister Narendra Modi, amid grand ceremony, for the sale of the 36 Rafale jets. But the agreement was a non-binding political one. Hollande declared that the negotiations were “progressing”, but in fact they had become blocked.

An article published in English in May 2016 by French website Intelligence Online (IOL) reported that Thales had engaged Gupta’s services to “woo” Modi’s Hindu nationalist BJP party in order to unblock the situation. “Thales made sure it had the support of Dev Mohan Gupta, who heads Indian Avitronics,” IOL reported, adding: “[…] Gupta's sons Sushant and Sushen are on good terms with President of BJP Amit Shah, the finance minister Arun Jaitley and the head of the Indian air Force, Arup Raha.”

The contract was finally definitively signed on September 23rd by Indian defence minister Manohar Parrika and his French counterpart Jean-Yves Le Drian. The Indian authorities had finally accepted the French offer of a total cost of 7.87 billion euros, a sum they had rejected six months earlier. 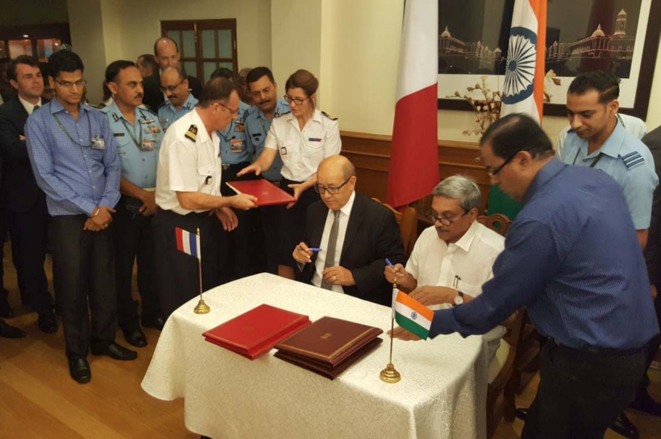 France’s then defence minister Jean-Yves Le Drian and his Indian counterpart Manohar Parrikar seen here on September 23rd 2016 in New Delhi signing the contract for the sale to India of the 36 Rafale jets. © Dassault Aviation

That final deal did not meet with unanimous satisfaction at the Indian defence ministry, to the point where three of the seven members of the Indian Negotiating Team (INT) signed a confidential report highlighting anomalies they said they had noticed.

In the document, revealed by The Hindu, they notably denounced the change that was brought about in the calculation of costs which, they argued, ended up with a purchase price that was too favourable for Dassault. They also argued that the Eurofighter was a cheaper option.

Those conclusions were contradicted by the office of the Comptroller and Auditor General of India, the CAG, which found that the final cost of the Rafale jets was 17% less than the initial tender offer. Meanwhile, the Indian Supreme Court ruled in 2019 that there were insufficient grounds for opening an investigation into the matter. But that decision was made without the information gathered in the AgustaWestland probe by the Enforcement Directorate.

For Dassault, the deal ended very well, and Sushen Gupta was once again rewarded. In March 2017, one of the Gupta family’s Indian companies, Defsys Solutions, invoiced Dassault for 1 million euros for the production of 50 replica models of the Rafale jet (see more on this in the first of this three-part report).

Defsys Solutions also became, as announced in a statement released by Dassault, one of the sub-contractors to the Rafale deal. Dassault declined to disclose to Mediapart the nature or the cost of that contract.

Mediapart sent detailed questions to all those involved in the issues raised in this report.

Indian business intermediary Sushen Gupta, who was contacted by email, and re-contacted on several occasions, did not respond to Mediapart’s request for an interview.

The spokesperson for Jean-Yves Le Drian, now French foreign minister and who at the time of the events evoked here was France’s defence minister, sent Mediapart a brief written reply (which can be found in full, translated from French into English, here, or by clicking on the ‘More’ tab at the top of this page). The French armed forces ministry (the now renamed defence ministry), told Mediapart that it had “no additional commentary to add” to that provided by the foreign affairs ministry.

France’s former president François Hollande, in office over the period of the negotiations and signing of the Rafale deal, replied to Mediapart’s questions by mobile phone text messaging.

India’s agency for investigating and prosecuting economic crimes, and notably money laundering, the Enforcement Directorate, confirmed reception of Mediapart’s questions submitted to it but did not respond to them. Similarly, the Indian defence ministry press secretary acknowledged receiving Mediapart’s questions submitted to it, but no response followed.

Contacted by email, the Indian company IDS did not respond to Mediapart’s questions.