'A republic of untouchables'

Following the release of the communiqué by Fillon's office on Tuesday, ruling UMP party MPs had difficulty in answering journalists' questions; "I have no precise information, but the prime minister has our support," commented Christian Jacob, head of the UMP parliamentary group, adding that he was heading off "to take three minutes to look at the communiqué". Just a few hours earlier, he had 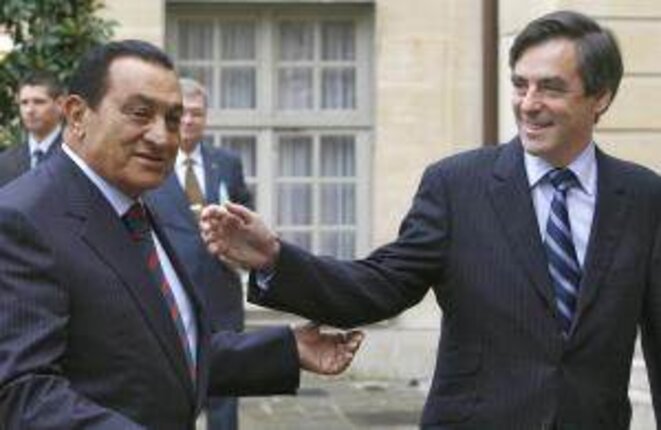 Fillon and Mubarak in Paris, 2007. © Reuters
insisted on the "total and unanimous support" of his party and the prime minister for Alliot-Marie. He denounced the "inadmissible attacks" on her by the Socialist Party. "One mustn't take a limited view of things," he had commented. "The essential thing is, has the independence of France been placed in question? No. Is there one euro of public money spent? No. Does it change the strategy of France?"

UMP MP and Fillon loyalist Jérôme Chartier mounted a defence of the prime minister. "The Egyptian protests began at the end of January, well after his return," he said. "At that time, Hosni Mubarak was viewed as an element of stability in the region [...] "Whether he be on a public or private voyage, the prime minister traditionally benefits from the protection of the country in which he was residing."

It was three hours after the release of the communiqué when UMP president Jean-François Copé announced his "total support" for Fillon and denounced - in clear confusion - the "systematic manhunt" employed by the Socialist Party. It was, of course, the Canard Enchaîné which revealed the favours enjoyed by Fillon in Egypt, and not the opposition party. "The prime minister is obviously not a citizen like any other," he added. "He remains the head of the government also when he is on holiday. In that capacity, for reasons of protocol and security, it would have been unthinkable that François Fillon would not be in contact with the Egyptian authorities when he went to Egypt." Copé insisted that "all of the personal expenses" of Fillon's holidays were paid "from his own pocket", which was not precisely what the official communiqué indicated.

Opposition MPs, meanwhile, were enjoying the moment. "I am stunned by the incestuous relations with scumbags, this collusion with criminals," said Green party MP Noël Mamère. "I understand better why François Fillon didn't want to abandon Michèle Alliot-Marie." A press statement by the Green party alliance Europe-Ecologie-Les Verts read: "Alliot-Marie with Ben Ali, François Fillon with Moubarak: France is the lauching stock of the world [...] How many ministers, then, would have used the services of Air Dictatorship for their holidays in the sun? The Sarkozy system has effaced the limits between power and money. Today, a minister finds nothing abnormal in taking the plane of an oligarch or having their holidays paid by a dictator."

Socialist Party leader Martine Aubry, speaking from the Senegalese capital Dakar, where she was attending the World Social Forum, spoke of her "consternation". The party's spokesman, Benoît Hamon, denounced "the interminable series of this government's guilty relationships with private interests."

Maverick conservative right MP Nicolas Dupont-Aignan, head of the Debout la République movement, said « it is not a question of a plane nor the discredit of the government, but the discredit of France, the honour of our foreign policies."

"Nicolas Sarkozy does not realize the gravity of the situation," he added. "If he continues like that, he won't be able to be candidate in 2012." Making fun of Nicolas Sarkozy's 2007 presidential election campaign promise to install an "irreproachable republic", Dupont-Aignan said France was a "republic of untouchables".

Meanwhile, Nicolas Sarkozy is due to appear on television on Thursday evening, when he will answer questions from a panel made up of what the TF1 television channel bills as a cross-section of members of the public. The long-planned programme, Paroles de Français, could not have come at a more awkward time for Sarkozy. French daily Le Monde reported on its website that the presenter Jean-Pierre Pernaut, commenting on the issues submitted by members of the public to the programme by email, said he doubted that the controversy over Alliot-Marie's Tunisian holidays - he was speaking before the revelations about those of Fillon - was a subject of concern for the French public. "I think it's out of the frame," he said. As for Egypt, there appeared no need for viewers to hold their breath.