According to information contained in a confidential report prepared by a recognised French expert on terrorism and terrorist financing, President Nicolas Sarkozy’s 2007 election campaign received up to 50 million euros in secret funds from the regime of the late Libyan dictator Colonel Muammar Gaddafi. The document, to which Mediapart has gained exclusive access and details of which are published here, suggests the money transited by a covert financial network, via Panama and a Swiss bank account, allegedly organized by Paris-based arms dealer Ziad Takieddine.

According to information contained in a confidential report prepared by a recognised French expert on terrorism and terrorist financing, President Nicolas Sarkozy’s 2007 election campaign received up to 50 million euros in secret funds from the regime of the late Libyan dictator Colonel Muammar Gaddafi.

Mediapart has obtained exclusive access to the document, written by Jean-Charles Brisard, who has notably served since 2002 as an investigator for lawyers representing relatives of the victims of the September 11th 2001 terrorist attacks in the US.

Brisard, 43, was employed over recent years as an advisor on terrorist issues to several French government departments and, in 2008, President Sarkozy awarded him the rank of Knight of the French National Order of Merit. He was also a special advisor on economic intelligence for the former Vivendi Universal - now Vivendi - media corporation.

Brisard’s report is based on confidential conversations he held with a French neurosurgeon, Didier Grosskopf, who was once close to Paris-based arms dealer Ziad Takieddine. Between 2004 and 2006, Doctor Grosskopf accompanied the arms dealer on several trips to Libya to treat members of Gaddafi’s family. 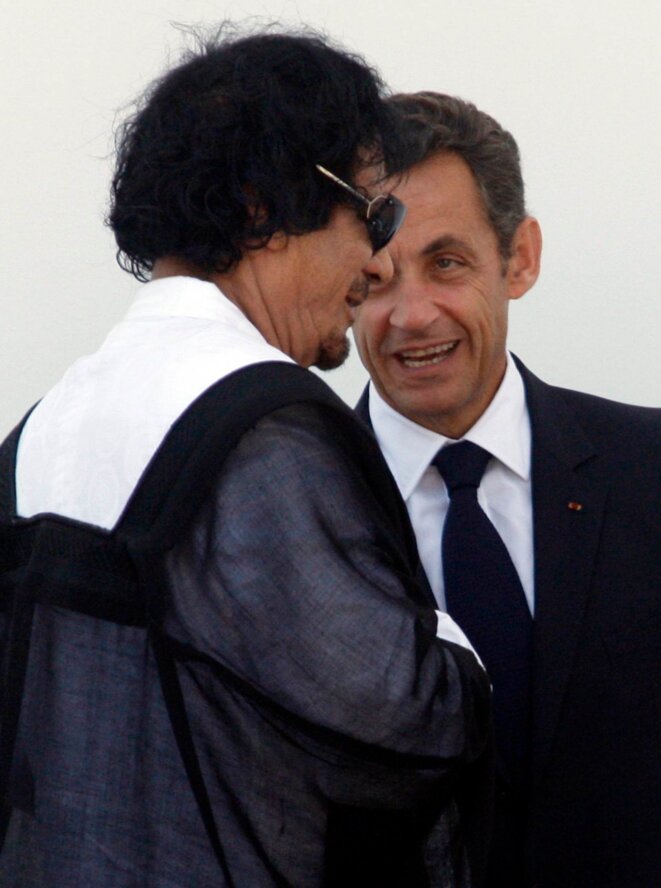 Takieddine is at the centre of an ongoing judicial investigation into the suspected illegal funding via weapons sales abroad of former French Prime Minister Edouard Balladur’s 1995 presidential election campaign. The Lebanese-born broker was last September placed under investigation, a legal move that is one step short of being charged, for his suspected role in siphoning off commissions paid in arms sales to Pakistan and Saudi Arabia to finance Balladur’s campaign.

Two longstanding friends of Sarkozy, who was Balladur’s budget minister and served as his campaign spokesman, were also placed under investigation last September over their involvement in the suspected scam, which has become dubbed in France as The Karachi Affair (For more on this, see Mediapart's Q&A guide here and a video presentation here).

But the exclusive revelations of Brisard’s report, published here, relate to Takieddine’s role, between 2002 and 2009, as an advisor and intermediary for weapons contracts mounted by Sarkozy’s inner political team with several Arab countries, and notably Libya. (A list of links to Mediapart investigations into Takieddine’s role with Sarkozy’s team can be found at the end of this article on page 4).

In 1995, Jean-Charles Brisard served as a junior member of Edouard Balladur’s presidential election campaign team. Questioned as a witness in the investigation into the suspected illegal financing of Balladur’s bid, he provided police with a note containing a summary of information potentially relevant to the case, and which included a reference to his report entitled ‘GEN/ NS V. MEMO DG’. This note was added to the evidence collected in the case on October 18th, although the report itself was not handed over to the investigators.

Mediapart has now gained full access to the document, which discloses information given to Brisard by Doctor Grosskopf during a confidential conversation between the two men held on December 20th 2006 in the Swiss town of Lausanne.

The document, an extract of which is precisely copied from the original immediately below here, refers to Nicolas Sarkozy and Ziad Takieddine by their initials, as it does also to the French president’s longserving friend and aide Brice Hortefeux, a former interior minister and currently vice-president of Sarkozy’s ruling UMP party.

The first part of the document is entitled 'CAMP07', referring to the 2007 French presidential election campaign. In an apparent reference to Sarkozy and Hortefeux, and with abbreviations of words, it describes how the “campaign financing methods” of “NS” were “settled during the NS + BH Libya visit” on October 6th 2005.

Nicolas Sarkozy was interior minister (1), under President Jacques Chirac, when he undertook the official visit to Libya in October 2005. Hortefeux was then a junior minister under Sarkozy, in charge of regional public authorities.

Sarkozy’s trip to Libya had been prepared by Ziad Takieddine, according to a series of notes that the latter sent to Claude Guéant, then Sarkozy’s principal private secretary at the interior ministry, and which have been seized as evidence by Judge Renaud Van Ruymbeke, the magistrate leading the ongoing investigation into the suspected illegal political funding corruption scam. Guéant, who became Sarkozy’s presidential chief-of-staff after the latter’s election in 2007, is the current French interior minister (2).

1: Nicolas Sarkozy was French interior minister, under then-President Jacques Chirac, from May 7th 2002 until March 30th 2004. He became finance minister from March 31st 2004 until November 29th 2004, again under President Chirac. He was re-appointed interior minister, still under the presidency of Jacques Chirac, from June 2nd 2005, until March 26th 2007. Nicolas Sarkozy was elected president of France in 2007 and took up his functions on May 16th 2007.

2: Claude Guéant was principal private secretary to interior minister Nicolas Sarkozy from 2002 to 2004, and occupied the same post when Sarkozy became finance minister between March and November 2004, and again when Sarkozy returned to government as interior minister between June 2005 and March 2007. Guéant became secretary- general  of the Elysée Palace, equivalent to chief-of-staff, of the French presidency after Nicolas Sarkozy's election as French President in May, 2007. On February 27th 2011, Guéant was appointed as Minister of the Interior, succeeding Brice Hortefeux.