French mayor behind gutted migrant camp vows it will return

A migrant camp close to the Channel port of Dunkirk, in north-east France, which housed about 1,500 people in wooden sheltered accommodation, was razed to the ground in a huge blaze on Monday that was started during fighting between groups of Iraqi Kurds and Afghans. The events have further fuelled anti-immigrant rhetoric from candidates campaigning in the French presidential elections, and placed in question the outgoing socialist government’s already reluctant support for the site. But, as Carine Fouteau reports, the local mayor behind the creation of the camp, which opened only last year, has pledged to rebuild it.

The huge blaze overnight Monday that destroyed much of the camp housing around 1,500 migrants at Grande-Synthe, near the port of Dunkirk in north-east France, has not only left its inhabitants homeless and distressed, but it has also appalled those who had successfully battled against the authorities and political opponents to establish France’s first migrant camp built to international standards.

“It’s a blow to the head,” said Damien Carême, the EELV Green party mayor of the small town of Grande-Synthe, who with the NGO Doctors without borders (Médecins Sans Frontières), was instrumental in creating the c amp which first opened in March 2016. “We’re picking ourselves up,” he added. “We have to face up to it.”

The fire tore through the camp’s 291 wooden housing huts, sparring only about 30. Of the estimated 1,500 population of the camp, 600 people have been given temporary shelter in three local gymnasiums, while the others have taken to the road, either towards Dunkirk or Calais. 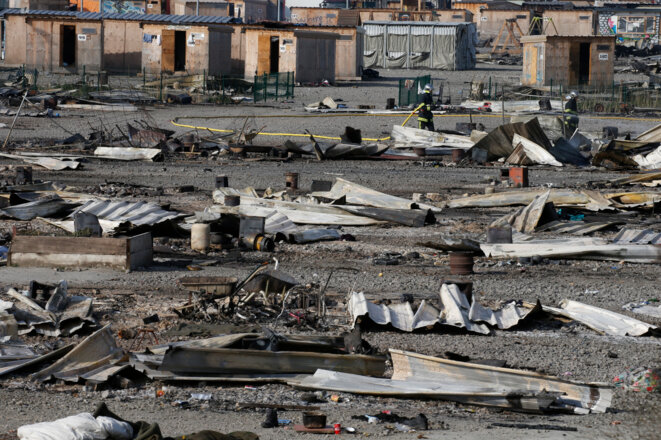 Razed to the ground: the camp at Grande-Synthe following the April 10th overnight blaze. © Reuters

Carême and others behind the project, which was prompted by the humanitarian crisis at the now-razed squalid “Jungle” migrant camp in Calais, about 40 kilometres west of Grande-Synthe, say they are dismayed at the added plight inflicted on migrant families who have already faced numerous ordeals during their long journey to the French Channel coast in the hope of finding a passage to Britain. But they are also angry that the events last Monday night have provided the government and other political opponents of the camp the opportunity to belittle the project.

The fire occurred after two fights broke out on Monday, in the afternoon and later in the evening, between groups of Iraqi Kurds and Afghans, who made up the majority of those who were housed in the camp and among whom tensions had been running high. According to witness accounts reported by press agency AFP, the conflict centred on the cramped housing conditions. A number of Afghans complained that they were forced to sleep in the camp’s communal kitchens, while the Kurds, who had arrived there before them, were allocated the camp’s wooden housing huts.

“During the first fight, a migrant received a knife-wound to the abdomen,” Carême told Mediapart. “Six people were hurt. Then, at about 10pm, it began again and 15 other people were hurt. Things escalated.” That was when a group of Kurds set fire to the communal kitchens, before a number of Afghans set fire to the wooden housing huts. According to the French interior ministry, the resulting blaze was brought under control in the middle of the night by about 60 firemen, while police intervention succeeded in “limiting the toll of victims to a few wounded”.

Access to the ruined camp is now barred while Dunkirk police proceed with their investigations into the events. “The families are in despair, they’ve lost everything - their few belongings, their documentation,” said Carême. “They are bare, they have nothing left.” He said he was encouraged by a conversation he held on Tuesday with France’s newly-appointed interior minister, Matthias Fekl, who he said had underlined that it is the migrants themselves “who are the prime victims of the disaster”.

“The accommodation in the gymnasiums cannot endure,” added the mayor. “The sites are in town, it’s not manageable with regard to the [local] population […] Despite the hardly favourable [presidential] election period, we’re going to find solutions.”  He said an initial plan is to setup tents or modified containers on the ruins of the camp, once the clean-up operation is completed, before later beginning to re-build the small housing huts, adding, “Perhaps not in wood”.

The rapid progress of the fire has naturally called into question the previous choice of using wood. “There is no miracle solution,” said Doctors Without Borders spokeswoman, Corinne Torre. “The problem is not the materials used. We built this camp because nobody was doing anything, because people were sleeping in woodland amidst mud everywhere. The problem is more to do with the management, the camp remained a camp instead of becoming a a plce to live.” While Doctors Without Borders was involved in building the site, the task of its management was successively handed to two associations.

The first of these was Utopia 56, a Brittany-based association dedicated to providing humanitarian aid to migrants in France, which was later replaced by a Dunkirk-based association, the AFEJI, which manages a number of centres aimed at helping the social integration of adults and children in distress.

“To manage this type of place requires solid supervision, social workers, people capable of taking charge of giving support to families,” said Torre. “That implies a lot of human resources, whereas, on the site, they weren’t sufficiently numerous.”

Added to the tense relations between migrant communities at the Grande-Synthe camp was the major problem of the presence of people smugglers, who have led their clandestine business in the surrounding Channel coast region over a number of years. They are mostly made up of Iraqi Kurds, and charge migrants anything between 3,500-15,000 euros per passage to Britain. Their activities saw a wide circulation of weapons, illustrated by occasional shootings and stabbings in a settling of scores. “Everyone was aware of this explosive context,” argued Torre. “The situation should have been tackled full-on.”

But Grande-Synthe’s mayor Damien Carême contended that it had been. “Weekly meetings were organised at the town hall with the managing association, the police and the public prosecutor,” he said. “Phone taps were placed on those suspected or organizing the [people] trafficking. Over one year, 31 people were thus arrested. Some were given heavy sentences.” But he admitted that the problems remained. The long-established migrant and refugee support organization Cimade was prompted to open a legal aid office in the Grande-Synthe town centre aimed at helping asylum seekers to escape the harassment and pressures applied by people smugglers.

Ministers divided over future of the camp

Following the events at the camp on Monday, the French government reinforced policing in the zone with the sending of additional mobile crowd-control squads, and an operation to place in sheltered accommodation those migrants found erring in the streets.  On Monday morning, the local prefect, Michel Lalande, who acts as the government’s representative for the wider Nord département  (or county) and who had arrived at the scene late Monday, spoke to reporters, announcing that the fire had brought an “end” to the camp’s existence. “It would be impossible to put back cabins in the place of those which existed previously,” he said. 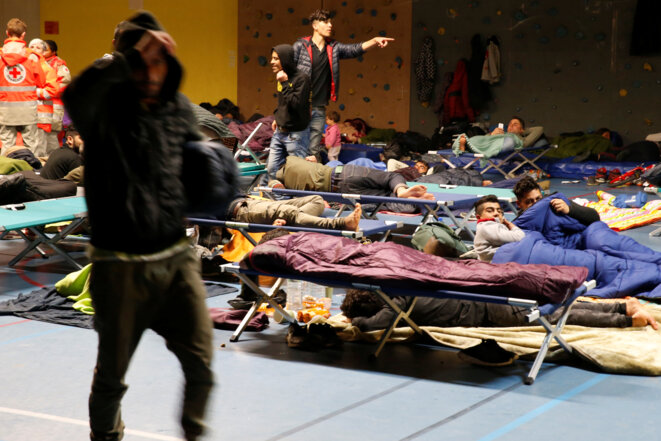 Displaced migrants from the destroyed Grande-Synthe camp were given temporary accomodation inside one of the town's gymnasiums (April 11th). © Reuters

His comments appeared to suggest that the authorities, who allocated public funding to part of the camp’s operational costs but who opposed a long-term existence of the site, would seize the opportunity to now close it down. The interior ministry and housing ministry announced that they would direct those migrants “who wished to undertake procedures for asylum” to the “reception and orientation centres” (CAOs) for asylum-seekers which are spread around France.

“The tensions came from the over-population of the camp,” said Damien Carême. “So I support the State in its efforts to find accommodation places in the CAOs.” He said he wanted to contain the population of the camp in the future to a maximum number of 700, which was reached last autumn shortly before the so-called “jungle” camp in Calais was dismantled by the authorities and which led to many of the displaced arriving at Grande-Synthe. He has also called for increased police numbers should the camp reopen.

Grande-Synthe mayor Damien Carême speaking (in French) about the migrant crisis during a debate organised by Mediapart at the Théâtre de la Ville in Paris on May 26th 2016.

Carême said he was unconcerned by the political attacks from opponents of the camp which have followed since the fire, which include those of Marine Le Pen, the presidential election candidate of the far-right Front National party, and one of the frontrunners in the campaign ahead of the first-round voting on April 23rd. “The giant fire at the Grande-Synthe encampment […] is the sign of the great migratory chaos that has shaken our country since years ago,” she declared in a statement issued on Tuesday. “This chaos must stop. All of the migrant camps will be dismantled after my election, if the French people elect me to head the State [sic],” adding: “We will drastically reduce asylum. Our national borders will be immediately re-established.”

There was a similar reaction to the blaze from conservative Les Républicains party candidate François Fillon. “It shows that the dismantling of [the camp in] Calais was not sufficient, that the construction of camps is not the solution, because it never-endingly brings new waves of migrants, and that the only solution is control at the borders,” said Fillon.

It is within this electoral climate that the continuation of the outgoing socialist government’s reluctant support for the camp has become uncertain. Housing minister Emmanuelle Cosse on March 17th renewed public funding of the site for another six months, but at the time she did so in opposition to then-interior minister Bruno Le Roux who, just a few days earlier, had announced that the Grande-Synthe camp would be dismantled “as rapidly as possible”.