François Hollande, his partner’s film, and the French fighter jet sale to India

September 21, 2018 By Karl Laske and Antton Rouget
This article is open access. Information protects us. I subscribe

'There is a serious industrial risk for Dassault'

The producer Elisa Soussan did not reply to Mediapart’s request for an interview. In a statement passed on via Julie Gayet, My Family said it was on Soussan’s “initiative alone that she convinced Reliance to invest in the film”.

Reliance appeared on the film credits, but was not mentioned in the financing details supplied to France’s public body for the production and promotion of cinema, the Centre national du cinema (CNC). Indeed, the funds from Reliance were handed to the film through Visvires Capital, an investment fund with offices in Paris and Singapore and which had already provided services for Anil Ambani. “Reliance Capital, for example, invested with us in the wine domain in India, one of our two activities along with the funding of films,” said Visvires founder Ravi Viswanathan, a French former banker of Indian origin. Viswanathan knows Anil Ambani personally, having been introduced to him 25 years ago by French banker and businessman Matthieu Pigasse. “Since then we’ve done things together, with Lazard and Reliance, when I was a banker,” added Viswanathan. 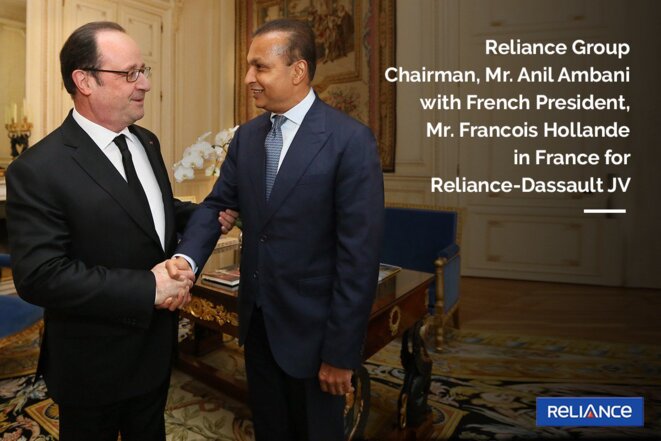 Visvires Capital had already invested in French cinema films, at a rate of about ten per year, principally in distribution and rarely in production. Ravi Viswanathan said he had been contacted relatively late by Kev Adams, with whom he had previously worked, for the investment in Tout là-haut. “They approached us at a very advanced stage of the film,” said Viswanathan. “The scenario was written, the actors chosen, the shooting at Chamonix [in the French Alps] done. Given the subject, with relation to the Himalaya mountains, we said to ourselves that we’d talk about it to Reliance, with who we had done things in that domain in the past.”

Just what was the interest for Reliance in the film, which was not distributed in India – the country is not even mentioned – remains uncertain. Contacted by Mediapart, the group did not respond.

“We asked them if the scenario interested them,” said Ravi Viswanathan. “They read the scenario and they said ‘yes’.” He said that Reliance was asked whether it would be interested in part funding the film “because we think the films of Kev Adams have in the past worked well in France”.

Viswanathan said that he had not introduced Ambani either to Dassault or Gayet in France. “It is absurd to think that he [Ambani] has need of someone to be introduced when one heads a group with the weight of a large part of a country’s GDP,” insisted Viswanathan. “Anil Ambani is quite capable of entering into contact with the people at Dassault on his own.”

In November 2016, the Intelligence Online newsletter, which has well established sources in the defence industry, mentioned Viswanathan presence in Ambani’s entourage and also that Reliance was to help fund Julie Gayet’s next film. At the time, the shooting of Tout là-haut had only just begun. It was initially planned for cinema release in March 2017, but that was later postponed to December 2017.

Meanwhile, given the scope of the questions filed by the opposition parliamentarians in India to the Comptroller and Auditor General of India, the Dassault-Ambani controversy appears set to develop far further. One of the principal issues they raise is the cancelling by Narendra Modi, who became prime minister in May 2014, of an initial public tender. The previous Indian government had opened the way for negotiations over the purchase of 126 Rafale jets, and a working agreement between Dassault Aviation and the Indian state-owned aerospace and defence corporation Hindustan Aeronautics Limited under which 70% of 108 of the aircraft would be built in India. But Modi, visiting Hollande in Paris on April 10th 2015, announced the 7.5 billion-euro deal for 36 jets built in France. The Indian opposition says Modi should not have made the announcement before renewing tenders for the supply of fighter aircraft from Dassault’s competitors. Meanwhile, the initial price of the Rafale fighters had risen by 300% from when the very first negotiations began, while the consequences for Hindustan Aeronautics have been catastrophic.

The defence arm of the Reliance Group was registered just 12 days before Modi’s announcement in Paris, while another of the group’s subsidiaries, Reliance Aerostructure Ltd, was created 14 days after the announcement. In September 2016, then French defence minister Jean-Yves Le Drian and his Indian opposite number Manohar Parrikar validated the inter-governmental agreement. In February 2017, the then French president François Hollande met with Anil Ambani in Paris after talks between the latter and Le Drian. 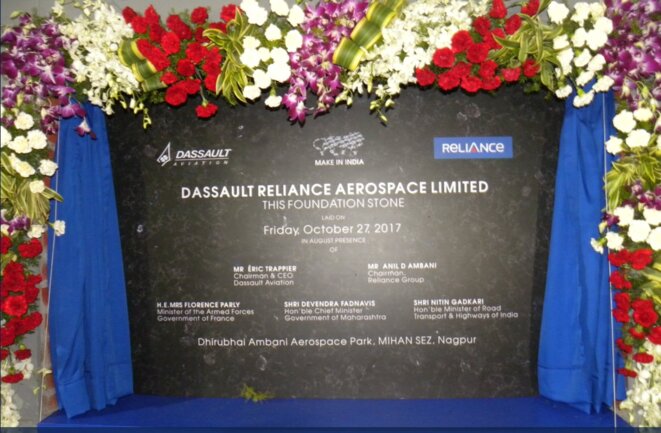 The sum represents a drop in the ocean when set against the totality of the Rafale contract. “There is a serious industrial risk for Dassault because we’re dealing with a company [Reliance] that has never built an aircraft and which has never been involved in defence,” commented a French analyst in defence issues, whose name is withheld. “The planned compensations represent colossal sums, and one must ask the question about the capacity of local industry to absorb the transfer of technologies.”