November 26, 2010 By Jordan Pouille
This man makes a living from selling bodies to grieving families. He fishes them out of the Yellow River, in China's Gansu province, at the rate of 200 a year. The remains of victims of suicides and murders float down from Lanzhou, an expanding industrial city from where Mediapart special correspondent Jordan Pouille reports on a dark and hidden side of the Chinese economic boom.
This article is open access. Information protects us. I subscribe

Wei Jin Peng has been up since 6 a.m. Ill-shaven, cigarette dangling from his lips, this family man has mounted his little Lifan motorbike, ridden past the elderly ladies doing their collective morning gym, past the five kilometres of apple and pear trees, and crossed an old suspension bridge. Beneath the bridge, his faithful companions await him: five dogs as big as Rotweillers, whose barking is echoed by the mountains. The beasts are guarding Mister Wei's loot: twenty or so corpses floating near the riverbank, gathered in this corner of the Yellow River (Huange He), sheltered from prying eyes and the current. 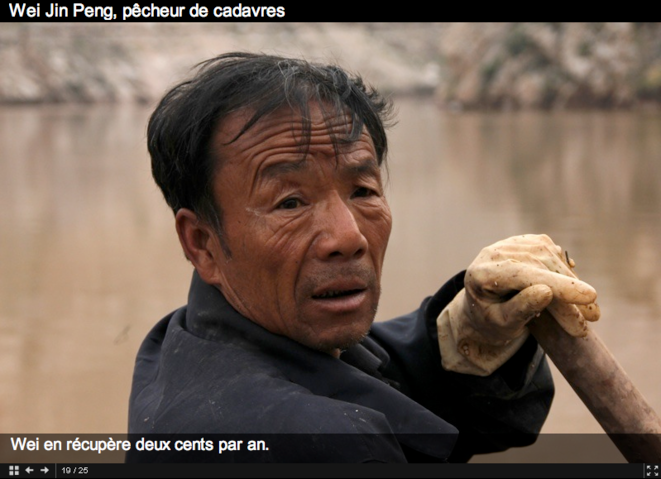 IN PICTURES: Click here to see photo file. WARNING: Some people may find the contents upsetting.

By 6.30 a.m., Mr Wei has already emptied his bottle of jasmine tea. He turns on his powerful torch, puts on his washing-up gloves, and makes his way to his ageless rowing boat. It is already loaded with hundreds of plastic bottles picked up from the river the previous day. He will be selling them by weight to a recycler come especially from Lanzhou, a city of 1.4 million inhabitants 20 kilometres away, capital of the province of Gansu.

Wei Jin Peng's rounds can begin; first towards the flotsam that has gathered near the dam during the night. "Generally the bodies are underneath, 30 centimetres deep" says Wei. "They aren't bloated with gas yet. It takes them a fortnight to surface." Wei Jin Peng vigorously stirs the rubbish with his paddle until he hooks a body. This morning it is a small pig, which he will give to his dogs for lunch.

"Last year, at this exact spot, I discovered a young woman with a baby tied to her breast," he recounts. "After three days, the police found the name of the father and I'm the one who broke the news to him. We buried them further up, behind that mountain."

This is the same mountain he climbed another time, in the rain, to reach the nearest police station, carrying the headless body of an adolescent on his shoulders: "I slung it over my shoulder and dropped it on the inspector's desk," he recalls with bitterness. "I was really angry, because not a single cop, not a single official had deigned to come and get it themselves... and, as far as I know, they haven't found the murderer."

Wei Jin Peng continues his rounds, letting his boat be carried by the current. "Sometimes the bodies find their own way to this hiding place. You need only bend down to pick them up. It's less tiring than picking pears," says Wei. Like this morning - the body of a young girl of average size is spread-eagled in the water: bare-foot, vintage jeans, lace blouse, and hair tied in a ponytail with an elastic band. Her face remains invisible, turned towards the depths. "I'll see to her later, once the sun has risen," he says.

No mobilization without confidence No trust without truth
Support us
Jordan Pouille is based in Beijing and runs a blog, in French, on Mediapart's 'Le Club' section.