They are French, Muslim and living in Egypt. Several hundred Salafists from France have chosen to live in this “Islamic land” because they no longer wish to stay in their country of origin, a “land of disbelievers” or heathens where they feel it has become impossible to practice their religion as they wish. They are not jihadists and have come to Egypt in search of their Islamic identity. Yet for many this is proving harder than they thought. Adama Sissoko reports.

Cairo, from our special correspondent.
In El Tagamu El Khames, an outer eastern suburb of Cairo known as the Fifth District in English, you find dirt roads where unpainted buildings alternate with others painted orange or yellow. Just a few metres further on, beyond the rubbish bins where stray cats forage, there are chic villas. The neighbourhood has become a haven for ultra-observant French Muslims who make a Hegira or migration to an Islamic country so as to practice their religion just as it was practised at its origins.

Some who have been here for several years live in the smart villas. But these are simply a dream for the more recent arrivals from France, who come here for low rents, the low cost of living and cheap courses in literary Arabic.

The district has four mosques. In a spacious, newly-renovated apartment, Oum Obeydallah (1) has invited six friends, all of them dressed in black jilbabs, the all-covering robes worn by observant Muslim women. The decor is white and purple, like the studio she lived in in France. Armchairs and rugs are Egyptian style.

As soon as they hear the call to prayer, the men make their way to the nearest mosque and the seven women kneel on the prayer mat facing Mecca. Kneeling close together “so as not to let the devil pass”, they recite verses from the Koran and prostrate themselves. “I thank Allah because I have accomplished my Hegira in Egypt,” says Oum Obeyallah with enthusiasm. 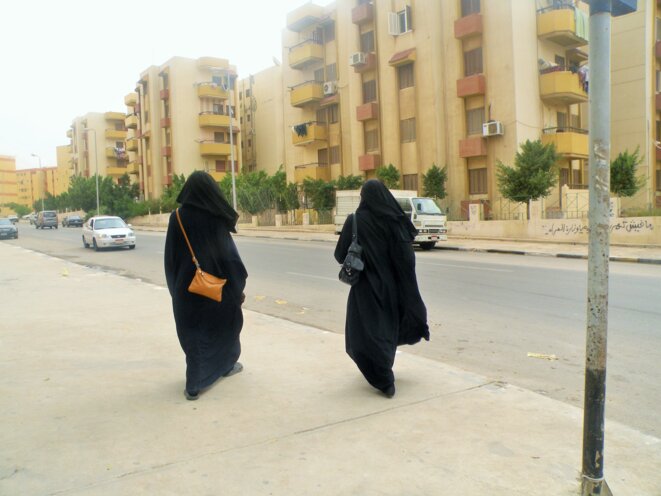 The Cairo suburb of El Tagamu El Khames is known for relatively cheap housing: in parts of it a three-room flat costs around 150 euros a month. © Adama Sissoko

There are many French Muslims from the Salafist movement in this area, come to accomplish Hegira, a term that refers to Mohammed’s flight from Mecca to seek refuge in Medina in 622 CE. Since France's law banning the wearing of face-covering veils in public came into force in 2011, many of these ultra-orthodox Muslims have felt a need to leave so as to practice their religion as they understand it. The Salafist movement, which elevates religious law above any other, forbids men and women from mixing and adopts a way of life based on what they call Islamic propriety, in which notably music, television and alcohol are outlawed.

It is hard to know their exact number. According to Samir Amghar, a sociologist at The Free University of Brussels and a specialist in Salafism and orthodoxy in Islam, there are fewer Muslims who leave on Hegira than Jews on Aliyah – 'ascent' - to Israel. And while financial help is offered to Jews emigrating to Israel, no similar help is available for Muslims, he notes. In 2008 the French consulate in Alexandria put their number at 500 out of the 5,000 French expatriates living in Egypt, representing a not insignificant 10%.

In France, Salafists are often confused with jihadists, but in fact jihadists are only a minority subsection of Salafists. The French Salafists interviewed in Egypt were categorical about their differences with jihadists. “Those people cause problems. Killing people is not Islam,” says one. “But I can understand – how can you tell us apart when they also wear the kameez [editor's note, a long tunic for men] and a long beard?”

They have become worried since the November 13th terrorist attacks in Paris. “We'll have a hard time, especially in the airports for converts with their French names,” fears one. But, like most French Salafists, they belong to the Quietist tendency, meaning they exclude intervention of any kind in the political sphere and advocate non-violence.

Salafists believe their interpretation of Islamic practice comes directly from the religion's origins, and they base their way of life on that of the first three generations of Muslims from the 7th century. For them, this is the only guarantee that they will enter heaven. They base this on a famous Hadith or saying of Mohammed: “Those who came before you of the people of the Book split into seventy-two sects, and this ummah [community] split into seventy-three: seventy-two in Hell and one in Paradise, and that is the jamaa'ah (main body of Muslims).”

This quotation is key for Quietist Salafists. To them, the risks of straying in a country of heathens or unbelievers such as France are great, so they must at all costs preserve religious dogma through exile. “For any Muslim, Hegira is an obligation once you are prevented from practising your faith,” says Oumou, 24, after the prayer is over. Aïcha goes further: “Even if you do good around you, if you have done your five prayers, if you die in a Kafir [non-believer] country, you will go to Hell.”

The French women often get together of an evening at the home of Oum Maryam a Guinean who has lived in Cairo for eight years. Myriam, 27, with a French mother and Algerian father, arrived seven years ago with her husband, a French Ghanaian. “I cannot see myself living in France any more,” she says. “I feel imprisoned. I did not feel safe when I wore the niqab [head-to-foot robe covering everything but the eyes]. My husband and I used to get insults: 'Go back to Saudi Arabia, have you no shame?' Here, it is simple. Lots of people wear the niqab, even prostitutes.”

Myriam is one of the few to explain why they had converted. “I had a bad experience in a relationship. I didn't want to abase myself for a man any more. I began to pray, read books and look things up on the internet. No one saw it coming. I used to go out a lot, I liked to please, I did dance performances – I was not a shy girl. Everyone in my area was shocked. Ten years ago there were few practising Muslims in Epinay-sur-Seine. People thought it [the niqab] was a passing fashion. But I have never taken it off since.”

One day she ran into a man she had known at school as he came out of the mosque. Nine months later, he became her husband. But, as if to contradict the prejudices she encountered in France, she adds: “I became religious before I was married. My husband did not coerce me into it.”

They joined the Salafist movement together and came to study Arabic and the Koran in Egypt. And then the question of Hegira comes up. “We're not rejecting our French identity, but it is true that today, we no longer have our place in society,” she says. Then pauses before adding: “It's the living together part that is no longer possible.”

1. In the Arabic naming system, 'Oum' is an honorific, or kunya, for a woman meaning 'mother of'. It refers to her first child, usually the first son once he is born. It can also be given to a childless woman to describe her qualities.