In May 2002, a group of 11 French engineers died in a bomb attack on their minibus in Karachi, Pakistan. They were helping to build submarines sold to Pakistan in a murky deal involving huge bribe payments. For years the blast was officially attributed to Islamic terrorists, a theory now dismissed. Mediapart has gained exclusive access to secret intelligence reports, hidden for almost nine years, which strengthen suspicions of a cover-up in a political scandal that runs all the way to the doors of the French presidency.

Key French intelligence reports into a bomb attack in Karachi in 2002 which left 15 people dead, including 11 French naval engineers, were kept secret by the French government for nearly nine years, Mediapart can reveal.

The contents of the three documents, which Mediapart has gained access to, further fuel suspicions of a high-level cover up in France that has prevented a conclusion to the judicial investigation into the engineers' murders.

Disturbingly, they appear to confirm suspicions that the attack was carried out in retaliation for the non-payment of significant bribes promised by France to local intermediaries to secure the sale to Pakistan of three French submarines. Evidence increasingly suggests these were also part-destined for illegal party funding in France, and were blocked by former President Jacques Chirac to starve his principal political rival of funds.

For years, the French and Pakistani authorities have leant credence to the theory that the murders of the engineers were the result of a terrorist attack by Islamic extremists. However, two ongoing Paris-based judicial investigations now focus on a financial motive - and the engineers' families have publicly voiced suspicions that its far-reaching consequences in France have led to a high-level cover-up. 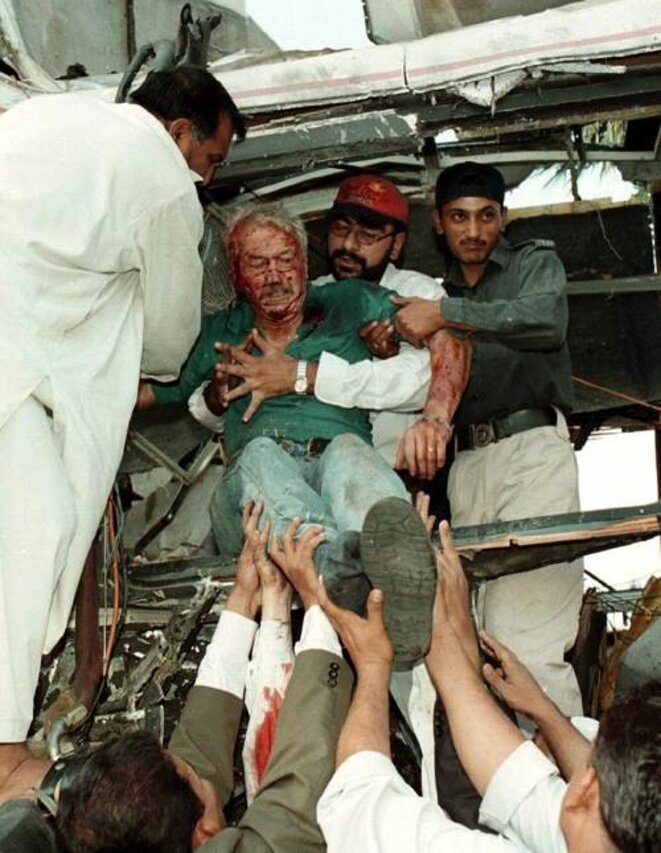 Evidence, including the testimony of a former French defence minister, suggests the chain of events that led to the attack originated in a decision by Chirac to block all the bribes on the belief that some of them returned to France, via elaborate offshore routes, to finance former prime minister Edouard Balladur's party finances. Chirac ordered the stopping of payments of the so-called commissions immediately after he beat fellow conservative right rival Balladur in the 1995 presidential elections.

President Nicolas Sarkozy was, in the run-up to the elections, Balladur's budget minister and his presidential campaign director. For a simplified A-Z of the events and ramifications of what has become known as the Karachi affair, please click here.

The documents revealed here by Mediapart show that the French intelligence service - the Direction générale des services extérieurs, the DGSE - suspected from the very day of the suicide attack on 8 May, 2002 that it was instigated for financial motives.

They also show that the French secret services rejected from the outset the theory that the Islamic terrorist movement al-Qaeda were behind the attack. Yet this was precisely the line of inquiry pursued from the start by the controversial former French magistrate Jean-Louis Bruguière, who was in charge of investigating the murder of the French nationals from 2002 until 2007, when he left the judiciary to pursue a political career with Sarkozy's ruling UMP party.

The three documents in question, dated 8 May 2002, the 11 May 2002, and another on 16 September 2004, are contained in the archives of the DGSE. In mid-January this year they were handed to investigating judge Marc Trévidic, who since taking over from Bruguière in 2007 has re-launched the investigation, focussing on the financial link.

This concerns the payments of significant bribes for the sale, agreed in 1994 when Balladur was prime minister, of three Agosta submarines to Pakistan by French naval defence contractor DCN (Direction des constructions navales). The engineers murdered in 2002 were working on the completion of the contract, helping to build one of the submarines in Karachi's naval shipyards.

Alongside Trévidic's investigation into the murders, another investigating judge - Renaud Van Ruymbeke - is investigating whether some of the commissions from the sale made their way back into France in the form of illegal retro-commissions to help fund the party of the then-outgoing prime minister Balladur, both in his failed 1995 presidential campaign and afterwards.

These crucial documents, kept secret from Judge Trévidic until now, were finally received after several requests made by the magistrate, when their 'classified' status, justified as being sensitive to national defence interests, was finally lifted. Since changing the focus of the inquiry in 2008, the judge has had little cooperation from the French government which has provided him with only a slow and selective de-classification of documents.