Tensions are running high in Ivory Coast, where Laurent Gbagbo, the incumbent president defeated in November elections is refusing to hand over power to his newly-elected rival Alassane Ouattara. A delegation of African leaders returned to the country Monday January 3rd to persuade Gbagbo to quit, amid reports they are offering him an amnesty in exchange. If he refuses, West African states have warned they will employ force to oust him. We report from a spot just outside the economic capital Abidjan, where a divided population feverishly await the next development in the crisis.

Tensions are running high in Ivory Coast, where Laurent Gbagbo, the incumbent president defeated in November elections is refusing to hand over power to his newly-elected rival Alassane Ouattara (see Black Box chronology bottom of page). Philippe Duval reports from Grand Bassam, a spot just outside the economic capital Abidjan, where a divided population feverishly await the next development in the crisis.

Grand Bassam is the former French colonial capital abandoned in 1900 after an outbreak of yellow fever. This is where, 30 kilometres from the economic capital Abidjan, women marched at the end of the 1940s to shake off the colonial yoke. This is also where, in the 1990s, a local secondary school was the scene of a revolt that soon spread to others in Abidjan, to demand the implementation of multi-party democracy.

A tumultuous city, a concentrate of all the contradictions of Ivory Coast, Grand Bassam is on edge today. On November 28th, it voted for Alassane Ouattara, and since then, the near daily run-ins with the forces of law and order have left at least two dead and numerous wounded. On the seafront is the French quarter, with its dilapidated colonial houses waiting to be officially classified as part of world national heritage, its luxury villas, its hotels, often run by French people, and visited by wealthy Ivoreans, white ex-pats, and UN officials for weekends on the beach. On the scorching sand they brush up against hoards of craftsmen come to tote their wares from all over West Africa, and battalions of‘balles perdues' (‘stray bullets', the nickname given to young prostitutes) looking for a few euros.

When you cross the lagoon via the Pont de la Victoire (Victory Bridge), named after a French triumph, you enter the African city: overheated, shady, where thousands of Africans busy themselves about their menial jobs. From Mali, Burkina Faso, Nigeria, Senegal, Benin, some of them arrived decades ago. In the evening they disappear into their makeshift homes, pieced together from wood, concrete and sheet iron, to watch French pay TV channel Canal + on pirate systems. 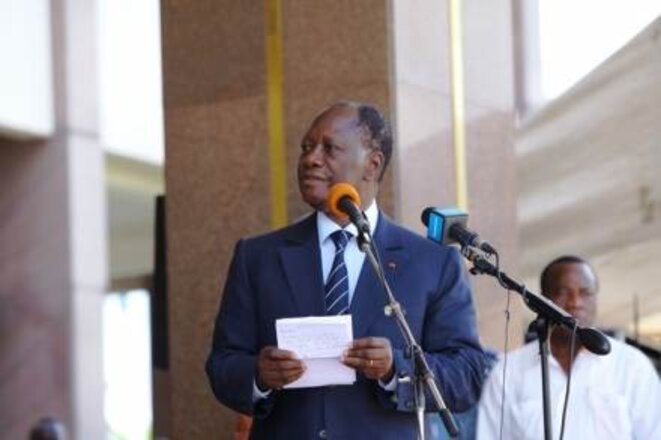 Alassane Ouattara © D.R.
These are the Odos and Phare (lighthouse) districts. The former is named after the French owner of the local sawmill who bequeathed them this swampland, and the latter after the semaphore that glowed there until 1950. Since that time the channel that opened into the raging ocean has filled with sand, and the Comoé River now has to make a long detour via the lagoon to meet the sea at the gates of Abidjan.

When you cross the main road that leads to Ghana, you enter the residential pro-Gbagbo quarters with a Catholic and evangelical churches. And, above all, you reach Moossou, birthplace of Simone Gbagbo, wife of the defeated president. This village, in an enclave on the banks of the lagoon, is where the Abouré live. This is the ethnic group that owns most of the land in the town. At one end of the long road is the house of the Mayor of Grand Bassam, a member of the PDCI (Partie Démocratique de la Côte d'Ivoire - Ivory Coast Democratic Party) formerly the only existing party, led by ex-President Koman Bédié, who joined the camp of Ouattara after coming third in the first round of the November elections.

At the other end of the road is the residence of the king, whose decrees are still the authority in Moossou. He too declares himself a PDCI partisan. Recently - an exceptional event - the king sounded the sacred drum, the echoes of which are heard far across the lagoon. Thus he summoned all the imams of the town, all the leaders of all the foreign communities, to address them with the following declaration: "I'm not forbidding you to demonstrate, but do so in your own zones and don't touch Moossou or the Abourés." Stones thrown at Abouré houses had provoked the royal ire.

Everything went up in flames on Friday, December 17th. As they had done for several days previously, young supporters of Ouattara were blocking the main roads of the town centre with pieces of wood and tyres. Around 11 a.m., a dozen policemen arrived on a brand new pick-up to disperse them with tear-gas grenades. One of these exploded near the little mosque where tens of Muslims were praying. Carried by the wind, the gas swiftly dispersed them. Spread by mobile phones, the rumour of an "attack on Muslims" inflamed emotions in the African town. 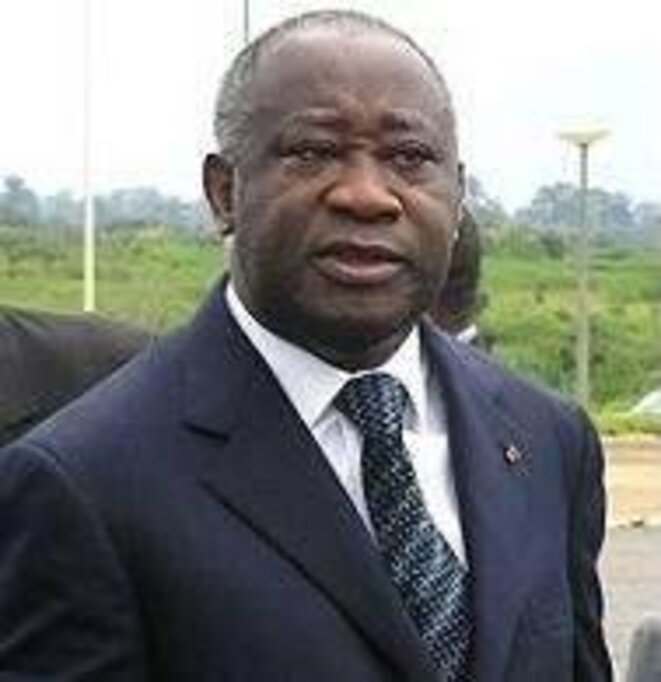 Ready for a fight: Laurent Gbagbo. © DR.
The chief of police, who was trying to present his apologies to the offended, saw the first demonstrators flood in. The white pick-up was turned over and set on fire. Diallo, pro-Ouattara, describes what happened next: "Two groups of youths sandwiched the police between them. The police threw the remaining teargas grenades and fired into the air. They aimed at two of ours, who were covered in protection [amulets and lucky charm fetiches]. But the bullets wouldn't penetrate. So they aimed for our feet to disperse us. My neighbour got two bullets in the thigh. There were several wounded, and one killed, a teenager of about 15. I took my machete and went to hide in the coconut plantation. Lots of my friends came to join me. An Ivorian TV vehicle soon arrived. It was blocked by the demonstrators, driven to the Odos district and burnt".

Police and riot police reinforcements were sent from Abidjan. But they were unable to prevent the home of the chief of police from being ransacked and set on fire. The man, due to retire at the end of the month, had previously sent his family to safety in Moossou. His mother, however, had remained in the house and only just escaped the flames.

"On Saturday morning, there was a curfew in broad daylight", explains a policeman. "My colleagues who had come from Abidjan were very angry. They belong to the same [police training academy class] year as the three policemen killed a couple of days earlier in Abobo railway station". Abobo is a quarter of Abidjan. "They broke down doors, notably in search of the fetish-man who had defied them the day before," he said. "Finally they arrested three youths and took them to the police station".

"At the entrance of my quarter they shot into the air to scare us," contines Diallo. "Old Dioula women [Dioula is the generic term used to designate northern ethnic groups], stripped naked to curse them. They headed towards the police station to demand their children be released. One policeman responded by dropping his pants. The women were dispersed. Since then the demonstrations have stopped. But it's still bubbling away underneath".

A pro-Gbagbo woman confides: "Us, we watch them dither. For the moment, we've hit the pause button. They've played their first half. We're waiting for the second, if there is one."

In Moossou, Joël, father of an Abouré family, was preparing for a demonstration in Abidjan called for by Charles Blé Goudé, leader of the pro-Gbago ‘Young Patriots'. He warned, "We'll send at least one coach. I voted Bédié in the first round and abstained in the second. But Alassane [Ouattara], a non-Ivorean as president, we cannot accept that. When he talks, you can tell he's from Burkina Faso. The Dioulas are counting on him to dominate us. If Gbagbo stays in power, if the army remains united, there'll be no problem. Otherwise, all the ethnic communities in the south who haven't moved yet will rise. And it'll all be over very fast. The Dioulas know that."

"If Gbagbo had been faced with anybody from the Ivory Coast, he would have fallen", continues Joël. "He was lucky to be confronted with Alassane". As for Simone Gbagbo, Joël is far from fond of her: "She acts like a man. Her face is hard and authoritarian. Once a youth called out to her ‘You're in your village, here. Do you want us to lie down at your feet to welcome you?' She took offence and called a meeting at her place. The king didn't come. He's on his throne. She's not the one who's going to order him about. She was given seven hectares to build her house, where she often goes to stay the night, guarded by the military. She'd promised to provide access to water and electricity for three hectares, but never did. With us Abourés, it's the man who goes to war and the woman who provides food."

Moosou is still the adopted village of Guillaume Soro, political leader of the former rebellion (see chronology at end of article), who has been re-appointed prime minister by incoming Alassane Ouattara. Since the crisis began, Soro has taken shelter with his staff and the president elect in the Golf Hotel. He is from the Sénoufo ethnic community in the far north of the country, but chose to vote in the lagoon town, which could be seen as a provocation to Simone Gbago. But above all it shows his sentimental attachment to a town where he went into hiding when he was sought by the police as the leader of the Ivorian student federation (and succeeded by Blé Goudé). It is also said that after the failed coup against Gbagbo of September 19th 2002, it is to Moosou that Soro fled Abidjan disguised as a woman, and from there took to the sea in a dugout canoe bound for neighbouring Ghana.

The story has it that he then crossed back into the country, to the central city of Bouaké, the capital of the rebel forces that never laid down its arms, and which voted massively for Ouattara on November 28th.

In his villa just off the main road, a Baoulé police superintendent (Boualé is an ethnic community from the centre of the country, which supports the PDCI), like nearly all the military, did not respond to the appeal launched on December 24th by Ouattara for the army to place itself under his orders. "They'll end up reaching an agreement", he confides with a smile. "Houphouët1 will come back with his spirit of peace. As long as the international community stops messing us up."