From control by the founders... 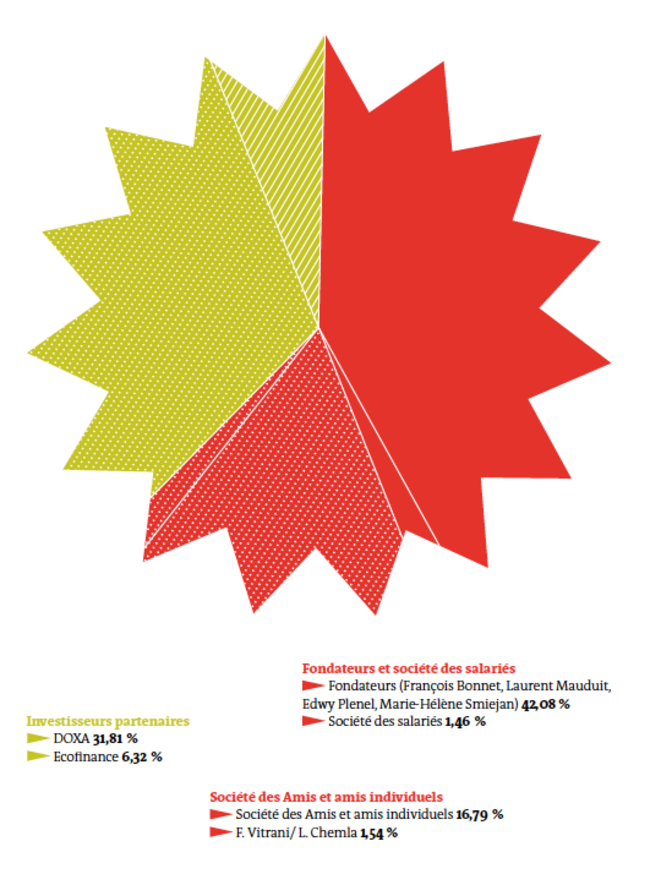 From control by the founders...
Mediapart's economic independence is currently guaranteed by the control of its capital by its four co-founders - François Bonnet, Laurent Mauduit, Edwy Plenel and Marie-Hélène Smiejan-Wanneroy who are co-signatories of this article. They own 42.08% of it inside an independent grouping (made up of founders, the Employees' Society and a Society of Friends) which in total represents 62% of the capital. The remainder of the capital belongs to two long-standing investment partners (they have been involved since the start in 2008): Doxa (31.81%) and Ecofinnace (6.32%).

Since Mediapart's creation the founders' control has been exercised via their influence on the board of directors, where all the enterprise's strategic decisions are taken: out of seven directors, the four co-founders and the president of the Society of Friends (Michel Broué) occupy five positions. The two remaining ones are reserved for two external directors proposed by the board and chosen by the shareholders' general assembly. They are currently Sébastien Sassolas and François Vitrani. 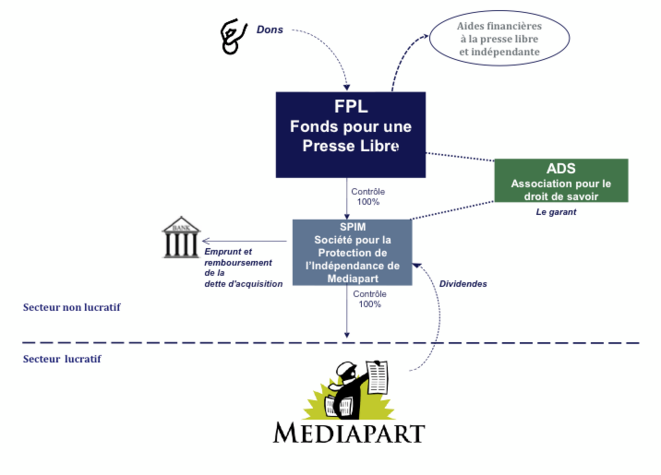 ...to ring-fenced capital.
The Fonds pour une Presse Libre (FPL) ('Fund for a Free Press') created by the Association pour le Droit de Savoir (ADS) ('Association for the Right to Know'), will own 100% of Mediapart's capital via the Société pour la Protection de l’Indépendance de Mediapart (SPIM). This capital will be ring-fenced by statute and no one will be able to buy or sell it.

ADS is an association created by Mediapart's founders. The FPL is an endowment fund created by ADS. SPIM is a Société par Actions Simplifiée (SAS) or simplified joint-stock company created by the FPL. The FPL is a not-for-profit organisation with what is known as a general interest objective. Mediapart remains a media enterprise carrying out a moneymaking activity.

(NB, the diagram above is merely for illustrative purposes, only the final documents can be treated as authoritative.)

What is our objective?

To protect Mediapart's capital and ring-fence its capital. To oversee the good management of Mediapart, guarantee its stability and its development. To improve the media ecosystem through financial support of the free and independent press and of the defence of freedom of information.

Why an endowment fund?

Endowment funds, which are not-for-profit structures, were introduced under the legislation passed on August 4th 2008 to modernise the economy. Aimed at the world of culture, it combines the financial flexibility of foundations (the ability to call on the public's generosity) and the legal flexibility of associations (they can be created by individuals or corporate bodies). Its objective is the carrying out of a mission or purpose that is in the general interest, in this case the defence of press pluralism and of journalistic independence, both essential conditions for the freedom of information.

The FPL will own 100% of Mediapart's capital via the SPIM to guarantee complete ring-fencing between the the not-for-profit activity of the FPL endowment fund and the commercial activity of Mediapart as a media enterprise. Donations received by the FPL in order to fund its not-for-profit objectives cannot in any circumstances be used to benefit Mediapart's moneymaking activity. On the other hand, Mediapart will pay a part of its profits to the FPL in order to contribute to its mission in the general interest.

Who will own Mediapart's capital?

Mediapart's capital will be ring-fenced, and not capable of being bought or sold or being the subject of financial speculation; it will be completely owned by SPIM, which itself is completely controlled by the FPL.

Who will run Mediapart?

What is the purpose of the SPIM?

As its name indicates, the Société pour la Protection de l’Indépendance de Mediapart protects Mediapart's capital, sheltering it from any capitalistic operation, and preserves the economic future of the digital journal by building up financial reserves. SPIM's role is limited to the management of Mediapart's capital wealth and it will have no power to intervene in its day-to-day management. Only decisions that go outside the usual parameters of management will be subject to SPIM's authorisation.


What is the purpose of the FPL?

The aim of the FPL is to defend press pluralism and journalistic independence, essential conditions for the freedom of information. The donations it will receive will be used to fund this action in the general interest but cannot be used to benefit Mediapart.

How will Mediapart's values be guaranteed?

The ADS is the ethical and legal guarantor of the whole system. Made up of Mediapart employees or former employees, it has a right of veto over any change in the statutes of the FPL and SPIM.

What is the timetable?

July and August 2019: the drawing up of the statutes, ethical charters and internal rules of all the structures. September 2019: completion of the transfer of 100% of Mediapart's capital to the Fonds pour une Presse Libre (FPL). October 2019: choosing the boards of directors for the FPL, SPIM and Mediapart.

How will the operation be financed?

Assessments have valued Mediapart at 16.3 million euros. The sum needed to buy 100% of the capital is lower than this sum. Some €4.4million in available operating cash can be deducted as well as a further €1 million because of the fact that some shareholders have donated their shares to the SPIM. The remaining €10.9 million will be financed via a bank loan.

If you have any questions about this re-founding of Mediapart, eleven years after its creation in 2008, please write to us at the following address: avenir@mediapart.fr. Our team will respond collectively to questions from 6pm to 7pm (Central European Summer Time) on Wednesday July 3rd during MediapartLive which is devoted to defending the freedom of the press (see programme schedule here).