Ilhan Omar, the black Muslim Congresswoman who has become a focus of US divisions

US Congresswoman Ilhan Omar, elected to the House of Representatives last November, has since become a focal target for President Donald Trump and many among of the American Right. Arriving in the country as a child with her refugee family from Somalia, obtaining US nationality at the age of 17, she has engaged a political career as an outspoken, hijab-wearing Muslim politician who espouses radical-left policies. She also denounces American support of the Israeli government, and her controversial comments on that subject and the place of Muslims in US society have prompted death threats and accusations of anti-Semitism. Just what does Ilham Omar really represent, and what is behind the virulent campaign by Trump and his allies over recent months to make her a political pariah? Mediapart’s US correspondent Mathieu Magnaudeix reports.

There were chants of “we love you” as women black rights activists and several members of Congress held a rally at the foot of the Capitol Building in Washington, DC on April 30th, gathering there in support of Congresswoman Ilhan Omar.

Omar, who won a Minnesota seat for the Democrats in the House of Representatives last November, was moved to tears, patting her heart and holding hands with Alicia Garza, cofounder in 2013 of the Black Lives Matter movement. Taking the microphone, Ayanna Pressley, the first black woman elected to Congress from the state of Massachusetts, shouted, "Hands Off Ilhan! I love you my sister”.

Over the past few months, Ilhan Omar, a black Muslim 37-year-old mother of three who gained US nationality after arriving in the country from Somalia as a child refugee, the first Somali-American elected to Congress, has become the choice target of President Donald Trump –  who has called for her resignation – and his allies.

She has found herself at the heart of political controversy, accused of anti-Semitism by Republicans, and also a number of Democrats, following three separate messages she posted on Twitter and for which she has since apologised. Amid the furore, she has received death threats, ranging from one man (subsequently arrested) who allegedly called her office threatening to shoot her, to anonymous messages like the graffiti scrawled in the toilets of a Minnesota petrol station calling for her assassination.

Omar, the first Congresswoman to wear a hijab, a supporter of the controversial Boycott, Divestment and Sanctions (BDS) movement against Israel, is hated by the Right, criticised by numerous liberals, but is also vigorously defended by others on the Left. She has stirred emotions with her attacks on US “bullying” tactics in the Venezuela crisis, with her outspoken solidarity for the Palestinian cause and against what she has called an “apartheid” in the Middle East, and also for her progressist policy propositions.

Like her fellow Congresswoman Alexandria Ocasio-Cortez, another outspoken young Democrat and Representative for a New York district, she campaigns in favour (see her website) of the policies proposed by Democrat leftwinger Bernie Sanders during the last presidential elections, such as universal social security protection (“Medicare for All”), a minimum hourly wage of 15 dollars, fee-free university studies and the annulment of student debts, federal financing of housing, a New Deal for tackling environmental issues, an end to privately run prisons, and for the promotion of LGBT rights.

Dania Rajendra, a New-York based leftwing feminist activist who sits on the board of Jews for Racial and Economic Justice, says the criticism of Omar’s position “is as much about [her] domestic political commitments – Medicare for All, Green New Deal, and so on – as anything having to do with Israel and Palestine.” 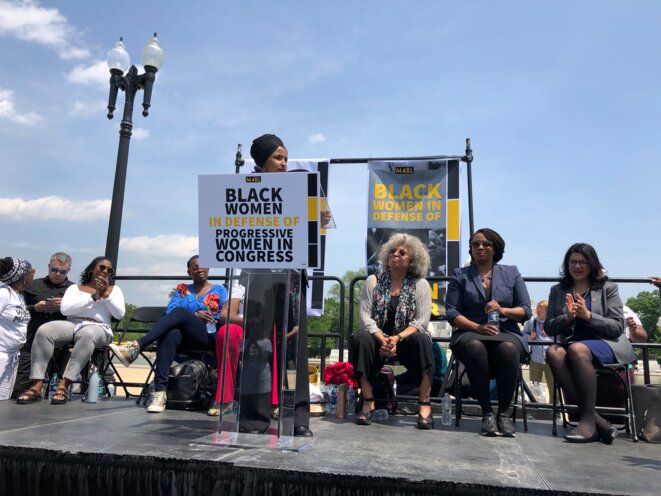 Also present at the April 30th rally in DC was Angela Davis, 75, the veteran black rights campaigner and icon for the American radical-left. “We stand up against the logic of scapegoating which emanates from the White House, replacing the political discourse with mystification and obscuration,” she told the gathering. “If one person or a few people engage in – or are accused of engaging in – a crime, the entire community is rendered culpable. This is the logic of lynching. If you can’t find one, get another.”

When Ilhan Omar took to the stand, thanking Davis who she said was one of her “idols”, she wiped her eyes. “I am very emotional, I refuse to cry, I always say that nobody really deserves my tears or any of my sisters’ tears, but you all moved me to tears with your love,” she said. “A sister of mine on TV said the thing that upsets the occupant of the White House, his goons in the Republican Party, many of our colleagues in the Democratic Party, is that they cannot stand that a refugee, a black woman, an immigrant, a Muslim, shows up in Congress thinking she’s equal to them. But I say to them, how else did you expect me to show up?”

“I tell people every single day, I have the same certificate of election than everyone else in the offices in Congress. But I got more people who voted for me than 428 of them! When they say who do you think she is: I am the one who people sent to the Congress. When this occupant of the White House choses to attack me, we know that this attack is not for Omar. This attack is the continuation of the attacks levelled against women, against people of colour, immigrants, refugees, and certainly against Muslims.”

“When we are talking about anti-Semitism, we must also speak about Islamophobia, it’s the two sides of the same coin of bigotry.”

On Saturday April 27th, just three days before the rally, a 19-year-old man who earlier posted a virulent anti-Semitic message on the online forum 8chan attacked a synagogue in Poway, close to the Californian city of San Diego, during Passover celebrations, shooting dead one man and wounding several other people. The toll of the attack, which came six months after a shooting massacre at a Pittsburgh synagogue which left 11 people dead, could have been much worse had the assailant’s assault rifle not jammed. 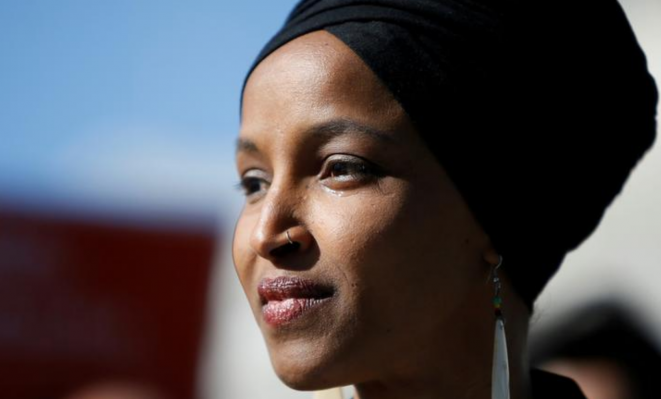 Omar underlined that the same man who carried out the Poway attack is also accused of setting fire to a mosque in nearby Escondido in March. “So I can't ever speak of Islamophobia and fight for Muslims if I am not willing to fight against anti-Semitism,” she said.

While Omar condemned the attack on the California synagogue, Republican Senator for Texas and self-styled defender of Christian values Ted Cruz took to Twitter to attack her and the “anti-Semitic Left” which he said was “getting worse”. Omar gave him a blistering reply: “A white nationalist literally terrorized a synagogue during Passover yesterday and you have yet to say anything. Shame on you.”

For the American Right, many of whom support Israeli nationalist policies, Omar has become an obsession. Liz Cheney, Republican Representative for Wyoming, speaking in March after the House approved a resolution condemning bigotry, said that Omar “embodies a vile, hate-filled, anti-Semitic, anti-Israel bigotry”.