When the past came back to haunt the Sasakawa Foundation

November 11, 2010 By Jade Lindgaard
The Franco-Japanese Sasakawa Foundation benefits from the support of some among France's academic and cultural elite. A recent French court ruling, however, has brought to the fore the murky history of Ryoichi Sasakawa.
This article is open access. Information protects us. I subscribe

Discreet and wealthy, the Franco-Japanese Fondation Sasakawa benefits from the support of some members of France's academic and cultural elite. A recent French court ruling, however, has brought to the fore the murky history of Ryoichi Sasakawa, after whom the foundation is named.

The Foundation found itself under an unwanted spotlight at the end of 2008 when a petition was sent to the French foreign ministry appealing that it withdraw from a colloquium co-sponsored by the Foundation. Signed by over 50 French academics, the petition (available, in French only, by clicking here) claimed that the Foundation bears the name of a Class A war criminal, Ryoichi Sasakawa. After World War II Class A criminals were tried in Nuremberg or Tokyo for their key role in the war. In addition, the petition said, Sasakawa was a historical figure of the Japanese far-right, close to the Japanese underworld. 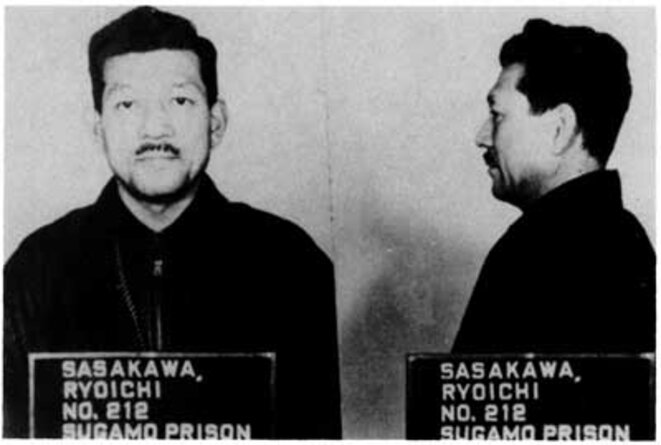 War criminal: Ryoichi Sasakawa pictured after his arrest. © DR
In response, the Foundation filed a libel suit against one of the signatories, Karoline Postel-Vinay, a senior research fellow specialising in Japanese affairs at the Centre for International Studies and Research (CERI) which is affiliated to the Paris Political Studies Institute, better known as Science Po, an elite French institute of higher learning. None of the other signatories were pursued.

On September 22nd, 2010, a Paris court dismissed the suit and ordered the Foundation to pay all court fees as well as awarding 5,000 euros to Ms. Postel-Vinay. Yet, on the day of the ruling, the Foundation issued a press release expressing its "delight" because the court recognized that "the accusations made against the Foundation were libellous." The press release makes no mention of the court's dismissal of the suit. In an odd choice of words, the Foundation said it "deplored" the legal action it was "submitted" to, despite the fact that it was the Foundation itself that originally filed the suit.

For Ms Postel-Vinay's lawyer, Lorenzo Valentin, "they are leaning on the complexities of libel law". The ruling recognized that some of the language in the petition "undermines the honour or the consideration due" to the Foundation. Two of the paragraphs - out of five - of the petition were considered to be libellous by the judge. But the ruling also states that Ms Postel-Vinay acted in good faith and "legitimately made use of her freedom of expression". Thus the suit was dismissed because libel was not found under French law.

CLAI, a consulting firm specialising in corporate communication, handles public relations for the Foundation. Its president Eric Giuily defended the Foundation's press release. "When the court mentions libellous statements, it means these are unfounded, unproven. Ms Postel-Vinay is not cleared of all accusations," he said. But for Lorenzo Valentin, "the libellous nature of the statement that Ryoichi Sasakawa is a war criminal was not at issue in this suit. The question was: is it legitimate to say so? Were we right to do so? To that question, the court clearly responded, 'yes'." For some, Clai and the Foundation are playing with words and are deliberately muddying a very clear legal decision.