'We underestimated their power': Greek government insider lifts the lid on five months of 'humiliation' and 'blackmail'

On the grave immediate crisis facing the Greek banks:

The reserves were not to the amount. We are in a situation where normally the liquidity in the market, the money that circulates in the market, is around 10 billion euros, but now with all that is happening, [with] people keeping money under the mattress, it is around 50 billion. 50 billion euros of cash circulate, and the ECB has stopped [its emergency funding of Greek banks]. So this means that people who have bank accounts, say [with] 2-3-4-5 thousand [euros], they can only get 60 euros per day, and if you have more accounts, OK, you can get more per day. But what about the people who have no account, who expect to live off their salary? At the end of every month they are broke until the paycheck comes […] From yesterday they were only giving 50 euros. Only smaller banks, like post office banks, which have fewer customers, can still give 60 euros. But the big four [banks] - National, Piraeus, Alpha and Eurobank - have run out of [notes of] 20s, so they can only give 50. So from 60 euros it has fallen to 50. 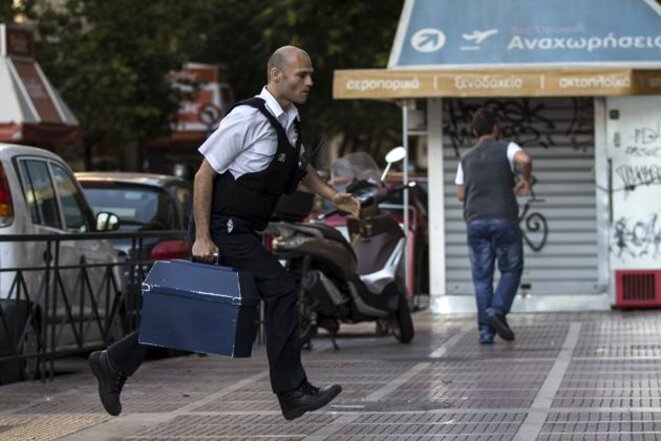 But the security reserves which they have kept, they run out of it. If all the people go and get 60 euros - even if they don't need it, but just to save something - there will come a time they [the banks] will have no cash [left]. And that's where the problem starts. And in that case, if we don't have an emergency liquidity supply from the ECB, we have no option but to start issuing some kind of [parallel] money. Of course, that would be the end of the economy because already there is fear, there is panic, that even if the banks open again, they will still need to be re-capitalised. Up to now, they have been solvent.

They were borrowing from the ELA, they should have been able to borrow from the ECB as well, but the ECB said "No, from now on we don't accept your collateral. You have to borrow more expensively from the ELA". That's another of those caps limits the banks have. But if they run out of reserves, the state paid about 40 billion to replenish the capital which the banks lost after the [2012] haircut of the old Greek bonds.

The part of the second programme of the agreement of 2012, after the haircut of the PSI [Private Sector Involvement], which was about 170 billion euros, 50 billion out of that was for the recapitalisation of the banks. Of course, there was another problem. From the PSI, the public funds suffered losses almost, if not more, in their own reserves. Why? Because they were forced under the law to save their cash reserves with the Bank of Greece, and the Bank of Greece had the right to use these funds to buy bonds on their behalf.

For me it was a big scandal because apparently what happened was a lot of politicians, bankers, a lot of people went and gave - they had bonds that they had bought 20% - they went and they gave it to the Greek Central Bank, Bank of Greece, 100%, they got their money and then the haircut comes to the public.

Basically, what they were forced to do was to use their cash reserves, social security funds, pension funds, in order to buy government bonds that were going to be cut in real terms around 70% in present value. So the funds right now, the pension funds, are facing a bigger problem than the banks are facing. The pension funds have to plan 15 to 20 years ahead to be able to pay pensions, when the aging population is increasing and the working population is decreasing. They also have to pay unemployment benefits and so on. So, all these debt locks came to the front now.

[…] Already from the end of February and certainly by the middle of March it was obvious that the creditors were not going to honour the February 20th agreement, which says that Greece proposes reforms, the Troika - "the Institutions", as it is now called - evaluates and agrees and the reforms go on. Nothing like that happened. The institutions were continuously rejecting reforms without looking. "No, they are too generous" and Varoufakis was telling them: "Please, let us complete four to five reforms on which we all agree and view as necessary and let us implement them and you can evaluate and make an assessment of them".

[The Institutions said] "No, no, we need a comprehensive agreement before we implement these reforms, because if you implement these reforms that would be a unilateral action. We haven't approved them yet, ok, we agree, but we still haven't determined the primary surplus". So we are unable to do anything while at the same time they wanted to see our books because they didn't trust our numbers. "We want to go to the Ministry of Finance, the Bank of Greece" et cetera, and Varoufakis was saying: "No, let’s start from the agreement of February 20th under which you are not supervising the Greek economy anymore and you are not assisting us or the creditors to assess the viability of the economy so as to gradually return to growth. That's the objective of the February 20th agreement, an extension of the existing programme. We amend, evaluate and complete the programme in four months. June 30th, programme finished".

But they pulled the plug on the banks and on Tuesday June 30th the programme finished, so we are not in a programme.

All the money they owe us… about 17 billion euros, [of which] 10 billion [is] from the remainder of the 50-billion-euro [Hellenic] Financial Stability Fund which, under the February 20th agreement, we would have to give back. We have not received any money from June last year, so for 12 months we have been paying around 10 billion euros to the creditors from our resources without getting a single euro from them, which they had agreed to give, of course under conditions. It was obvious they were not going to cooperate and that we needed growth and these were two problems going side by side. They didn't want to finance the money we were entitled to in order to pay the debts.