The spiral of state-driven terror in 'gangsterized' Haiti

In Port-au-Prince, the capital of Haiti, a succession of massacres since 2018 by criminal gangs of inhabitants in several neighbourhoods is denounced by rights organisations as a strategy by the country’s deeply unpopular president, Jovenel Moïse, to terrorise the population into submission. François Bonnet reports on the horrific events, and interviews one of Haiti’s leading young writers, Jean D’Amérique, whose recently published novel, Soleil à coudre, centres on one such neighbourhood.

Haiti, whose history since its independence from France in 1804 has been marked by economic hardship, political instability, dictatorships, and recurrent natural disasters, including a 2010 earthquake that left more than 250,000 dead, is one of the poorest countries in the world, and the poorest of any country in the Latin America and Caribbean region.

Now, Haiti is collapsing under an exponential tide of violence. Gang-led massacres are multiplying in the poorest neighbourhoods of the capital, Port-au-Prince, and kidnapping has become a fast-growing criminal activity, spreading throughout the country. Criminal gangs are becoming ever more powerful, taking control of swathes of territory, the most often with the complicity of the notoriously corrupt Haitian police and President Jovenel Moïse’s administration.

The situation has spiralled since a first massacre in November 2018 in the capital’s slum-ridden La Saline neighbourhood, a heartland of anti-government protests, when at least 71 people, including children, were murdered, 11 women were gang-raped, 400 homes destroyed, and the victims’ bodies variously thrown into rubbish dumps or dismembered and burned.

In December last year, a statement by the US Treasury Department confirmed the substance of previous reports by the UN and human rights activists about the events.  The statement announced financial sanctions against the perpetrators; these were identified as Jimmy Chérizier, a then serving police officer and now a gang leader who took an active part in the massacre, and also the Haitian interior ministry’s director general Fednel Monchery and another government official close to Moïse, Joseph Pierre Richard Duplan, who are both accused of planning the horrific attack. 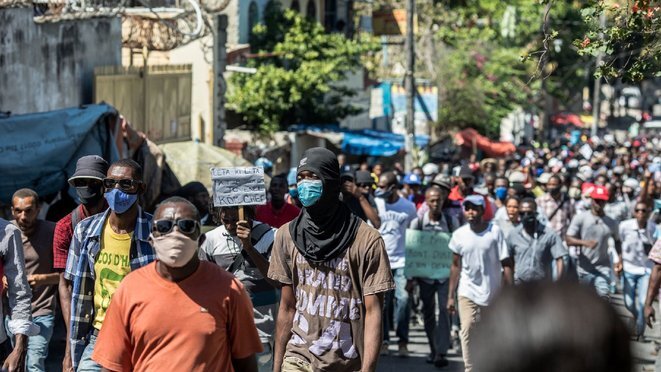 A protest march in Port-au-Prince calling for President Jovenel Moïse to leave office, February 10th 2021. © AFP/Valerie Baeriswyl
The massacres have become recurrent since the raid on La Saline two and a half years ago. “Cherizier is now one of Haiti’s most influential gang leaders and leads an alliance of nine Haitian gangs known as the ‘G9 alliance’,” sobserved the US treasury in its December 10th statement. “Throughout 2018 and 2019, Cherizier led armed groups in coordinated, brutal attacks in Port-au-Prince neighborhoods. Most recently, in May 2020, Cherizier led armed gangs in a five-day attack in multiple Port-au-Prince neighborhoods in which civilians were killed and houses were set on fire.”

The latest carnage occurred on April 26th this year, when a group known as the “Boston” gang raided a zone held by a rival gang, “Ti Gabriel”, in the Port-au-Prince neighbourhood of Cité Soleil, a vast shanty town that is home to a population of around 260,000.

According to a provisional toll, backed by eye-witness accounts, at least nine people were murdered and many more wounded. The victims included a pregnant teenager and two young men riding in a tap-tap – a share taxi – which was machine-gunned during the clashes.

Just weeks before those events, other gangs attacked the Bel-Air neighbourhood in the centre of the capital, on March 31st and April 1st. It was a punitive raid, led after local inhabitants had prevented two attempted kidnappings. The toll was at least 13 dead, while four people went missing, and around 20 homes burned down, according to the Haiti’s National Human Rights Defense Network (which goes by the French acronym of RNDDH ), a local association for the defence of human rights which is respected by the media for the quality of its investigations.

“The survivors live in a psychosis of fear,” declared the RNDDH in a report published online on April 7th. “Commercial and educational institutions do not operate […]  the RNDDH reminds to the attention [sic] of the agents of the PNH [National Haitian Police] who are not in collusion with any armed gang, the obligation that they are made to side with the victims. This is why the organization recommends that they do everything possible to protect the population of Bel-Air, to defend it from the onslaught of the G9 and Fanmi e Alye, to secure it by all means and to put an end to these attacks once and for all.”

Several gangs are grouped into the so-called “G9 alliance”. One of its leaders, cited in the US Treasury Department statement, is the sinister Jimmy Chérizier, who also goes under the nickname of “Commander Barbecue”. The instigator of the two worst massacres, at La Saline and Bel Air, Chérizier is a former high-ranking officer with the National Haitian Police who now rules over a part of the relatively wealthy Delmas municipality in Port-au-Prince. He takes to the radio to announce instructions and warnings and, according to several investigations, including by the UN, has direct relations with the country’s political regime.

“With the ‘G9 alliance’, which has the benediction of the authorities, the massacres have increased,” commented RNDDH director Pierre Espérance. He cited the example of yet another attack carried out in the Cité Soleil neighbourhood in July 2020, when around 50 people were reported to have been killed, while 30 others went missing, and 15 women were raped.

Another Haitian organisation, the Centre for Human Rights’ Research and Analysis, or CARDH, is involved in trying to keep a regular register of the kidnappings in the country. In its May 4th dedicated bulletin, it noted that kidnappings had increased by 300% in April – up from 27 recorded in March to 91 in April. Over the 12 months of 2020, it reported a total of 796 kidnappings. Once again, the political powers are accused of being involved in the crimes.

“The G9 gangs and [their] allies circulate in vehicles with official registration plates, and state services take part in meetings in all tranquillity,” noted the CARDH in a press release (in French) in March. “They receive money, arms and munitions from the government […] The officials and the other sectors implicated in the criminality (kidnapping, arms trafficking) are known. It is the same for those who liaise between the national [presidential] palace, some ministries and the armed gangs.”

Several human rights associations in Haiti have come together under an umbrella organisation called the Haitian Observatory of Crimes Against Humanity (OHCCH). On April 22nd, the OHCCH published a lengthy report, compiled in association with Harvard Law School’s International Human Rights Clinic, entitled ‘Killing with Impunity: State-Sanctioned Massacres in Haiti’. Reporting in detail on the numerous killing sprees that have been taking place for more than two years, the joint study affirms that Haitian state actors were involved in the massacres.

“There is a reasonable basis to conclude that state and non-state actors have committed crimes against humanity in Haiti during Jovenel Moïse’s presidency,” the report concludes. “The brutal killings, rapes, and torture of civilians in La Saline, Bel-Air, and Cité Soleil appear to follow a widespread and systematic pattern that further state and organizational policies to control and repress communities at the forefront of government opposition.”

“This finding must serve as an urgent call to action to ensure that accountability follows,” said the report, adding: “The attacks show an alarming pattern of state involvement. Evidence suggests that senior government officials in Moïse’s administration have planned, provided resources for, and solicited attacks against civilians.”

One of the member associations of the OHCCH is the Bureau des avocats internationaux (the Bureau of international lawyers). A prominent Haitian legal team for the defence of human rights, it is headed by lawyer Mario Joseph. “The Moïse administration maintains that these attacks are simply internal quarrels between armed gangs,” he said. “But irrefutable evidence establishes that high-level government representatives have played an important role in the planification and execution of the attacks, and also to conceal them.”

This fusion between criminals and the political powers stems from a massive rejection among the population of President Moïse and his ruling party, the PHTK (Parti Haïtien Tèt Kale), in large part due to a dislocated state apparatus which lies in ruins. The president’s numerous opponents, including political parties, the clergy and associations, accuse him of attempting to quell revolt by terrorising the population into submission. Before the holding of presidential and legislative elections due later this year, Moïse has drafted a reform of the constitution in order to reinforce his powers within a dictatorial regime, and which will be put to a referendum at the end of June.

The US, which remains the most important actor in Haitian politics, has until recently unflinchingly backed Moïse. But the arrival of the new US administration under President Joe Biden appears to have changed that. Concerned over the accelerating deterioration of the situation in Haiti, Washington has opposed Moïse’s draft constitutional reform and planned referendum, insisting that properly organised legislative and presidential elections must be held in priority. Meanwhile, the killings and kidnappings which have largely achieved their aim of terrorising the population, and above all in Port-au-Prince, have brought the country to a halt. 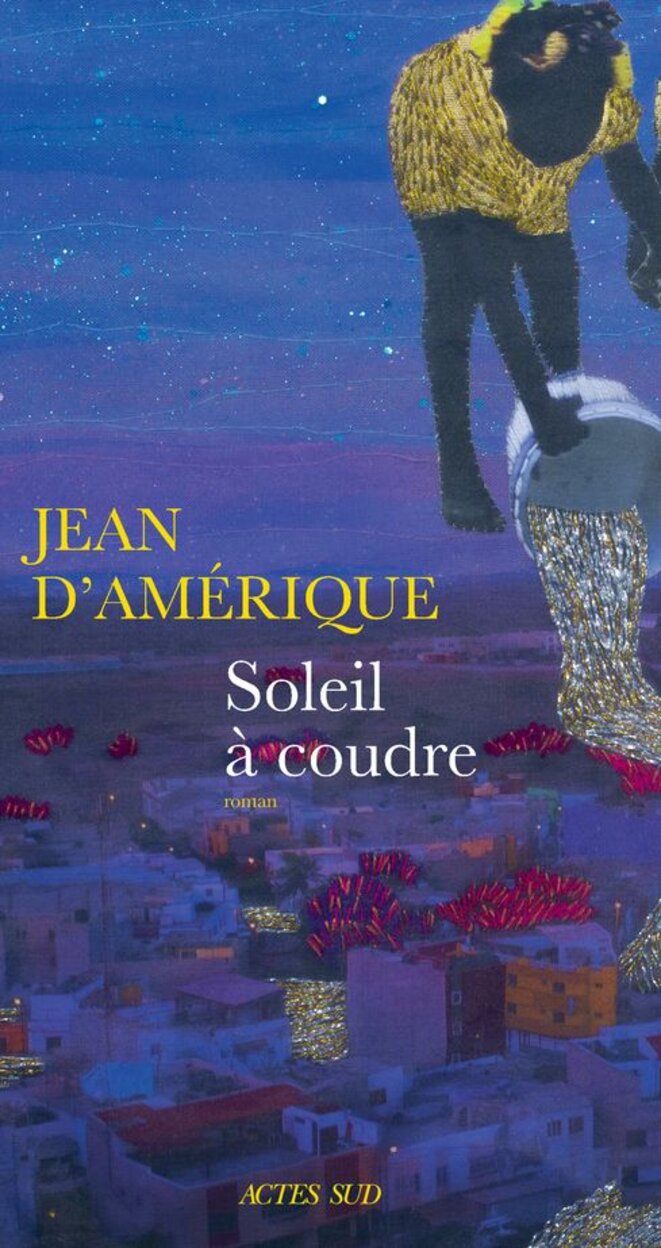 The latest carnage at Cité Soleil is echoed in a book recently published in France, entitled Soleil à coudre, which provides a sharp insight into what Haitians are living through. Its author, 26-year-old Jean D’Amérique, is one of Haiti’s leading young writers. His novel, written in French, recounts the descent into hell of the shanty towns of Port-au-Prince. “That violence is there – I have seen it and I have lived it,” he told Mediapart in an interview published here on the following page. “Yes, we are at the extreme point of a crisis that has lasted for years. It’s the result of a state that has become institutionalized in violence, a state that is always absent and creates nothing anymore other than violence. These gangs – it created, armed, funded and manipulated them.”