France returned to the polling stations on Sunday for the second and final round of voting to decide the make-up of the councils that will govern the country’s 13 new ‘super’ regions. Though in the first-round voting the far-right Front National drew massive support, arriving in first position in six regions, it failed to win control of a single region in the second round. Thus in many ways the outcome was a setback for Marine Le Pen's party, as many conservative and left-wing voters voted tactically to keep the far-right out of power. Yet the Front National showed that it is now firmly implanted in all of France apart from the Greater Paris region, and with more than 6.6 million French people voting for it the party beat its previous record set at the 2012 presidential elections. Meanwhile the ruling Socialist Party did better than many predicted, picking up five of the regions, though it lost control of Greater Paris. On the other hand Nicolas Sarkozy's conservative Les Républicains picked up only seven regions - some thanks to tactical voting from the Left - a mediocre performance for the leading mainstream opposition party that will raise question marks over the former president's leadership. Here is Mediapart's live coverage of the results, reaction and analysis in English.

Naomi Klein on the "mixed day" of COP 21 climate deal 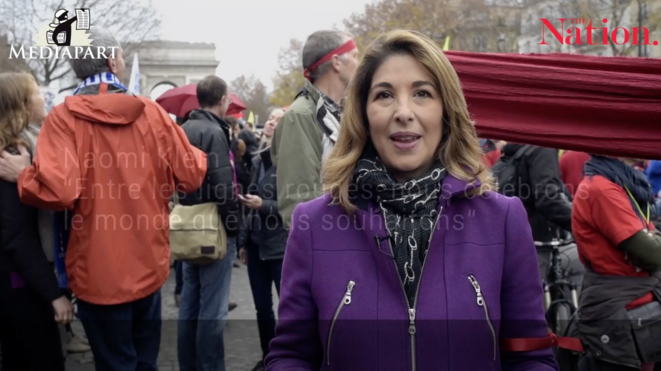 Naomi Klein is a Canadian social activist and author and a director of climate activist group 350.org, whose 2014 book This Changes Everything: Capitalism vs the Climate became her third major international bestseller. Klein has been in Paris throughout the two-week United Nations climate conference COP 21 which began on November 30th, and kept a regular video blog in English published on Mediapart, a project in partnership with US weekly magazine The Nation. In her final contribution (all six blogs are on this same page), she comments on the end of the summit on Saturday, “a mixed day” and an agreement Klein says “does not leave us safe”.

One of the world’s most prominent art dealers, Guy Wildenstein, is to stand trial in Paris next month on charges of tax fraud and money laundering. The case centres on undeclared assets from the estate of his late father Daniel Wildenstein, for which Guy Wildenstein and other members of his family have received a record tax adjustment totalling 550 million euros. Mediapart has gained access to the judicial document detailing the case for the trial, and which reveals the staggering sums involved and the complex offshore structures that hid, among other assets, a stash of prized artworks. Laurent Mauduit reports.

How the far-right handed Sarkozy his dismissal notice 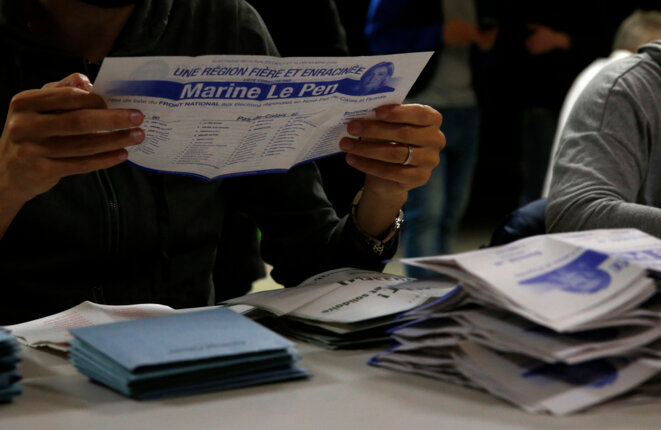 Among all the political casualties of the first round of France’s regional elections last weekend, when the far-right Front National party achieved a landslide share of votes cast, none was left in poorer shape than Nicolas Sarkozy, leader of the recently-renamed conservative opposition party, Les Républicains.  The success of the Front National, and the retreat of support for the conservatives, is widely forecast to be sealed in next Sunday’s final round of voting. Mediapart editor François Bonnet and political correspondent Ellen Salvi analyse why the former president, since his return to active politics 18 months ago, has failed to reconstruct the mainstream Right, and how, by perpetually mimicking the far-right, he has handed them victory.

French regional elections: first round as it happened plus final results

France went to the urns on Sunday in the first of two-round elections to decide the makeup of the councils of France’s 13 newly-formed ‘super’ regions. The poll, held December 6th and 13th, is an important test of the French political map, 18 months away from presidential and parliamentary elections. The final results show a massive victory for the far-right Front National, which garnered the biggest share of the vote nationwide and goes into the second round next Sunday with its candidates in the lead in six regions. This is Mediapart’s coverage in English of results and reaction after the first-round vote on Sunday, with an update of final scores on Monday. 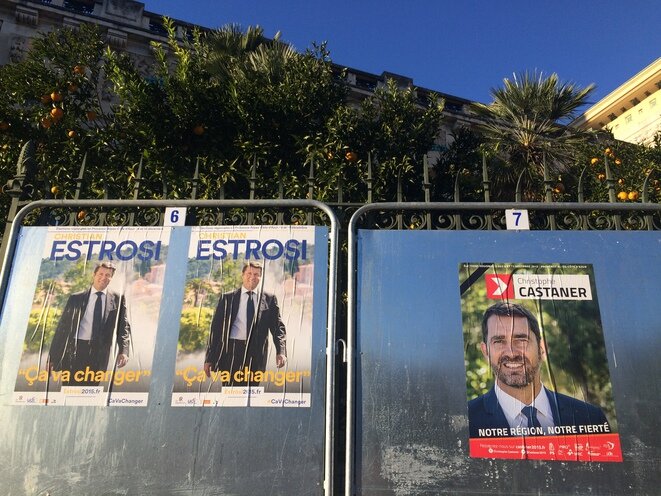 France’s far-right Front National (FN) party is hoping to take control of the Provence-Alpes-Côte d’Azur region in nationwide regional elections played out today and next Sunday. The council of this south-east corner of France has been run for 17 years by the Socialist Party, which is now predicted to receive a drubbing. The main predicament facing the socialists after the first round is whether or not to withdraw their list of candidates for the benefit of the hard-right conservative candidate to defeat the FN. But, as Ellen Salvi reports from Nice, even collective political suicide may not be enough to stop the increasingly popular far-right. 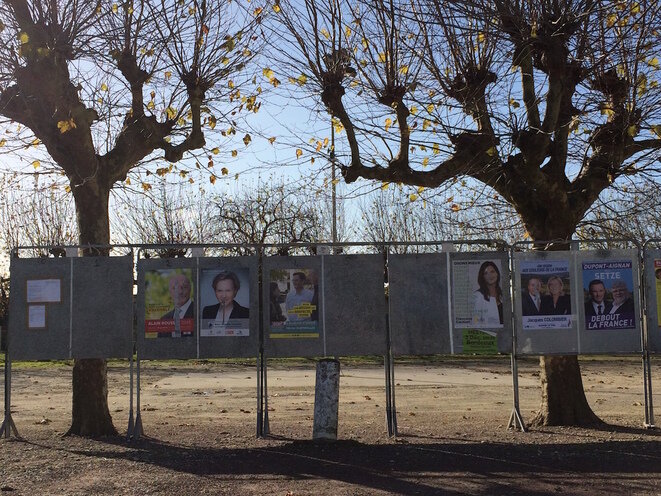 Next Sunday France goes to the polls to elect the members of the councils ruling the country’s new administrative regions, and which will be an important test of the popularity of the far-right Front National party tipped to draw strongly increased support. The two-round elections for the 13 new super-regions, created in a reform earlier this year from 22 previous regions, are overshadowed by the immense shock felt across France after the terrorist massacres in Paris last month. Mathieu Magnaudeix travelled before and after the attacks to the new Aquitaine-Poitou-Charentes-Limousin region in south-west France where, bucking the trend, the Socialist Party was confident of victory. On his return visit last weekend, he found that optimism had completely disappeared in the aftermath of the attacks.

The United Nations international climate summit, COP21, opened at Le Bourget close to Paris on November 30th in unusual circumstances. The host country France is under a state of emergency as it welcomes leaders, negotiators and activists from around the world. As Mediapart's environment correspondent Jade Lindgaard reports, a deal at the summit appears to be within reach, but doubts and questions remain about the real direction of the negotiations.

France: a government outside the law, a state out of control

Two weeks after the November 13th terror attacks, France's Fifth Republic is gripped by fear, a clamour for war and the spectacle of a government that is out of control. This headlong rush towards security at all costs – including the arrest of climate activists ahead of the Paris climate summit - is storing up new crises for the future. The fact that it is a socialist government that has taken France down this route recalls the bad old days of the discredited Fourth Republic, writes Mediapart editor François Bonnet.

The lottery of France's laws on smoking cannabis

For many years successive French governments have opposed the decriminalisation of cannabis, unlike many other countries. However, France did recently bring in on-the-spot police fines in a bid to simplify procedures and avoid lengthy and costly court cases for cannabis users. However, this new approach will not end the disparities and lack of coherence in the existing repressive policy, under which prosecution for using cannabis depends as much on who you are and where you live as on what you smoke. Michaël Hajdenberg reports.

France's soul-searching over why it became a terror target

Was France attacked on November 13th because of what it is – or what it does? The debate over whether the country's perceived status as a beacon for individual and social freedom or its foreign policy in the Middle East was the main factor behind the attacks by Islamic State is dominating social media and private conversations as well as public discourse. However, Joseph Confavreux argues that rather than simply trying to put itself in the minds of the terrorists, French society should focus on the wider impact for the country and the political responses that are now needed.

In the wake of the Paris terror attacks, President François Hollande has carried out a 180 degree U-turn on French policy towards the Syria crisis. Previously the French stance was that neither Islamic State nor current leader Bashar al-Asad was acceptable in Syria. Now the approach is an all-out focus on destroying IS. On Thursday November 26th, Hollande will meet Assad's ally, Russian leader Vladimir Putin, in Moscow to help build an alliance to destroy the organisation. But, Thomas Cantaloube argues, apart from air strikes, there seems little real strategy to restore peace to Syria and find a political solution.

Paris climate conference protests to go on despite ban on march

Following the recent terror attacks, public demonstrations have been banned in Paris. This includes the huge march for the climate planned for Sunday November 29th, on the eve of the opening of the COP 21 climate change conference in the French capital. Some groups have described the ban as an attack on civil liberties. Meanwhile the march organisers, the Coalition Climat 21, have vowed that some form of public demonstration – within the law – will still take place. Jade Lindgaard reports.

Revealed: how French secret services 'lost track' of one of the Bataclan bombers 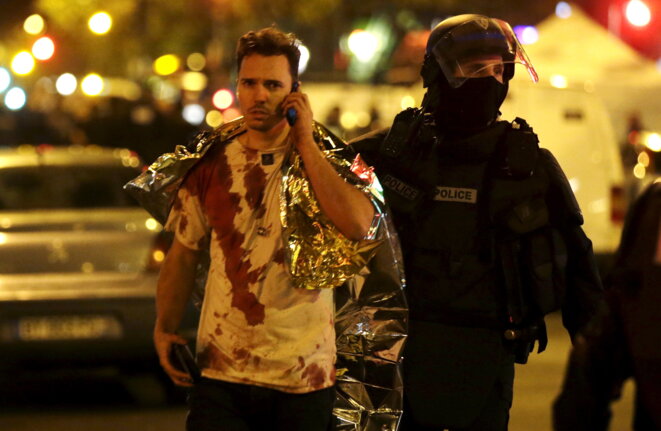 French intelligence agencies knew as far back as 2009 that Ismaël Omar Mostefaï, one of the three suicide bombers who attacked the Batalcan concert hall in Paris, had been radicalised in a group in France led by a veteran jihadist with a history of planning terrorist attacks, Mediapart can reveal. Mostefaï had also been spotted with the group when it was under surveillance in April 2014, and the authorities were later informed that he had almost certainly gone to Syria, at the same time as another future Bataclan bomber. But by late 2014 the secret services no longer knew of his whereabouts. He did not resurface again until November 13th, 2015, when he was part of the coordinated attacks that killed 130 people in Paris. The French authorities, however, deny there was any intelligence blunder. Yann Philippin, Marine Turchi and Fabrice Arfi report.

Democracy is not war

The French parliament this week approved a three-month prolongation of the state of emergency introduced in the country immediately after the November 13th terrorist attacks in and around Paris which have left 130 people dead. The debate over the state of emergency powers is about its effectiveness, writes Mediapart editor in chief Edwy Plenel who argues here that the emphasis on security alone is a short-term response driven by an immediate political agenda which hands the perpetrators a symbolic victory, and which disarms French society as much as it protects it.