Mediapart journalists to stand trial for revealing what the butler heard

The publication by Mediapart of carefully selected contents of secretly taped conversations between L’Oréal heiress Liliane Bettencourt and her close circle of financial and legal advisors led to a major political scandal and a judicial investigation in which former president Nicolas Sarkozy was placed under investigation for taking advantage of the billionaire’s frail mental health. Mediapart published only what it considered to be in the public interest, exposing evidence of political corruption, money laundering and interference by the executive powers in the proper workings of the judicial system. But now magistrates have sent for trial journalists from Mediapart and French weekly magazine Le Point on charges of breaching personal privacy laws by revealing the recordings, which were made by Bettencourt's butler. Michel Deléan reports.

Magistrates in charge of several investigations into a series of suspected corruption scams surrounding the financial affairs of 90 year-old L’Oréal heiress Liliane Bettencourt, Europe’s wealthiest woman, have decided to send for trial her former butler and five journalists, including Mediapart’s editor-in chief Edwy Plenel, on charges relating to breach of privacy.

The charges against the journalists centre on the publication, first by Mediapart and subsequently by French weekly news magazine Le Point, of the contents of secretly-taped conversations between the billionaire and her close advisors and which exposed evidence of money laundering, tax evasion, illegal political funding, ministerial conflicts of interest and interference by presidential staff in the proper workings of the justice system.

Along with Edwy Plenel, the four other journalists to stand trial are Mediapart’s investigative reporter Fabrice Arfi, his former Mediapart colleague Fabrice Lhomme (who now works for French daily Le Monde), Franz-Olivier Giesbert, editor-in-chief of Le Point and the weekly’s former editor Hervé Gattegno, who has since joined the French edition of monthly magazine Vanity Fair.

The three magistrates, based in Bordeaux, have charged the journalists with ‘handling a document that breaches the intimacy of private life’, while Bettencourt’s former butler, Pascal Bonnefoy, who made the recordings, has been charged with ‘breaching the privacy of a person’s private life’. Official notification of the charges, dated August 30th, was received by Mediapart on Monday.

It was the publication of the recordings, in 2010, that eventually led to a wide-ranging investigation that has seen former president Nicolas Sarkozy and one of his former ministers, Eric Woerth, placed under investigation (a French legal status one step short of being charged) along with several of Bettencourt’s former financial and legal advisors. A decision by the same magistrates on whether to send them for trial on corruption charges is imminent. 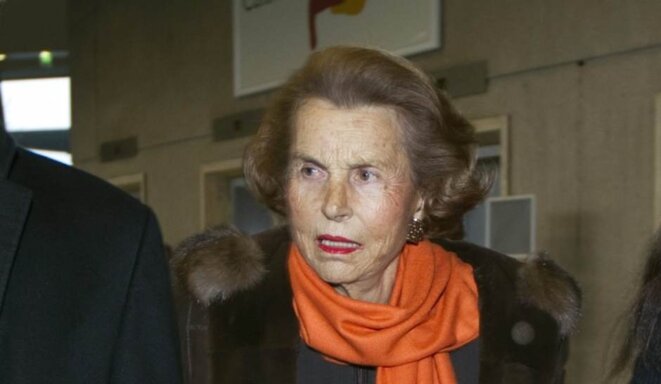 The conversations were taped by Bonnefoy over a 12-month period between May 2009 and May 2010, using a voice recorder hidden in an office at the billionaire’s mansion home in Neuilly-sur-Seine, close to Paris. Bonnefoy later explained to police that he had made the recordings to disclose the corrupt activities he had witnessed by Bettencourt’s close circle of socialites and advisors, and notably her wealth and investment manager, Patrice de Maistre, all of whom he said "hide behind a tired and fragile woman". He resigned from his job, which he took up in 1989, in May 2010.

A medical examination of Bettencourt ordered by magistrates in June 2011 found that she was suffering from “mixed dementia” and “a moderately severe stage [sic] of Alzheimer’s disease” and that the “slow degenerative cerebral process” began in 2007.

In a statement given to police on July 23rd 2010, Bonnefoy said Banier, now aged 66, had "destroyed" the Bettencourt family, humiliated Liliane Bettencourt by calling her "a bitch", and that his "arrogant" behaviour included urinating over plants at the Bettencourt home.

Bonnefoy first gave the recordings, amounting to about 20 hours and contained on 28 CD-roms, to Liliane Bettencourt’s daughter, Françoise Bettencourt-Meyers, in May 2010. Bettencourt-Meyers, Liliane’s only child, was at the time involved in a legal battle against Parisian socialite, celebrity photographer and novelist François-Marie Banier after lodging a complaint against him in 2007 for having taken advantage of her mother’s mental frailty to gain from her what a subsequent police investigation found to be almost 1 billion euros-worth of gifts, including cash, artworks and insurance policies, over a ten-year period.

Bettencourt-Meyers sent the recordings to the police on June 10th 2010. Mediapart, which had gained a copy of the recordings, began publishing the contents on June 16th. It chose to publish only those extracts that it decided were in the public interest, excluding conversations that were of a strictly private nature.

In the statement he gave to the Bordeaux magistrates during their investigations, Mediapart editor-in-chief Edwy Plenel said: “We are journalists, we carry out investigations and we publish information on the basis of the facts that we have obtained. We learnt that in the framework of an affair that we did not interest ourselves in - because it was a private affair - information of public interest had been produced. We went about enquiring into this information and we then did our job of verification and selection.”

“I insist again, these recordings revealed immense pressure that was put on a judicial case by the executive powers, and placed directly in question the impartiality of the Nanterre public prosecutor,” Plenel continued. “This is an essential point in the decision we took to make this information public.When, in a democracy, there is a breach of the proper functioning of justice, the press must play its role. We are obviously aware of the requirement upon us to respect a person’s personal privacy. That is why, over several days, we took the time to select which information should be made public.”