The French government’s proposed legislation to reform immigration and asylum laws has begun its passage through parliament this week, to fierce attacks from opposition MPs of both the Left and the Right. The conservatives, whose policies under their new leader have veered towards the hard-right, claim the bill is little more than soft tinkering of current laws, while the Left denounce an unjustified clampdown on migrants’ rights, a view shared by some among President Macron’s ruling LREM party. Mathilde Mathieu was in parliament to witness the early exchanges of what promises to be a week of inflamed debate.

Faced with the first significant revolt within the ranks of President Emmanuel Macron’s LREM party, the government has spent weeks fine tuning its proposed new legislation to curb immigration, and to defuse the unease publicly expressed by a number party MPs over the severity of the measures it contains.

The bill of law, proposed by interior minister Gérard Collomb, began its passage through the lower house, the National Assembly, on Monday and is due to be debated throughout the week. The government faces a double-pronged attack on its bill, whose very title, ‘Immigration under control, effective asylum and successful integration’, illustrates the political tightrope of its passage, from both the Left, who regard it as an unjustified clampdown on migrants, and the Right who claim it is too soft by far.

“You declared that your project is far from being all-out repressive? Let me reassure you, we don’t doubt that,” a sarcastic Pierre-Henri Dumont, Member of Parliament (MP) for the conservative opposition party Les Républicains (LR), the largest opposition group on the National Assembly, told Collomb during the debates on Monday evening, which were mostly taken up with his party’s motion to reject the new bill. 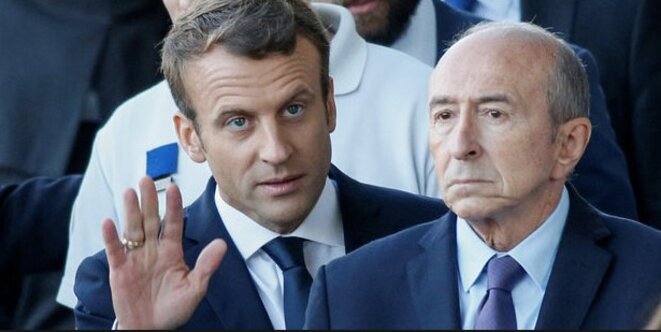 Just as fiercely opposed to the proposed legislation, but for very different reasons, MPs from the leftwing opposition parties in parliament left the chamber before the vote on the LR motion, refusing to take sides with either the conservatives or the government. The motion was without surprise thrown out, such is the overwhelming parliamentary majority enjoyed by President Emmanuel Macron’s centre-right La République En Marche party (LREM), but the motion was a declaration of intent that promises lively debates ahead over the bill’s detail.

“This little law of small adjustments […] will not allow France to get out of the migration chaos,” said LR MP Guillaume Larrivé, addressing the chamber. “It limits itself to modifying two or three technical parameters, reducing here a delay for appeal [editor’s note: the bill proposes shortening the period in which a rejected asylum seeker can appeal the decision], increasing there the duration for detention [a proposed lengthening of the detention period for an illegal immigrant, from 45 days to 90 days]. The conservative MP said the bill avoided “the real debate” about what he called galloping immigration, a “prohibited” debate “closed away in conformism, locked up in legalism, bolted by moralism” and “muddled by extremism”. As an aside he asked why there were no mass expulsions “to Africa” by chartered flights.

The LR party, under its new leader Laurent Wauquiez who was appointed after the conservative debacle in last year’s presidential and parliamentary elections, has taken a significant turn towards hard-right policies in what is widely regarded as an attempt to lure support from the far-right Front National party (FN), and which has prompted several of its prominent figures to disassociate themselves from the party line. Its alignment to aspects of FN policy, notably on immigration, prompted Sacha Houlié, an MP with Macron’s LREM party, to jump at Larrivé’s jibes on Monday evening with the comment: “‘Moralism, ‘immigrationism’ – why don’t you also cite the Lepenist ‘nomadism’?”, in a reference to the parlance of FN leader Marine Le Pen.

During the debate on Monday, the conservatives produced statistics they said had become a taboo, claiming 1.3 million residence permits had been granted between 2012 and 2017, the period in office of the previous socialist government, and that there are between 200,000 and 400,000 illegal immigrants on French soil. In 2017, they added, there were more than 100,000 people seeking asylum in France, a year-on-year rise of 17%, while another 75,000 people remained in the country despite being the subject of expulsion orders. “Germany has sent away three times as many people as France, and the United Kingdom twice as many,” said MP Éric Ciotti, leading the LR charge in parliament against the bill. “The impotence of public [authority], that’s what it’s about.”

During the debates this week, the conservatives will be demanding, among other measures to clamp down on immigration, that there should be automatic expulsion of foreign nationals who appear on a security agencies’ register, the FSPRT, of those suspected of having been radicalised for the cause of Islamic terrorism, and the expulsion of all foreign nationals serving a prison sentence of five years or more, whatever their residence status. Furthermore, they want to refugee status to be stripped from those sentenced to two years in prison, and a ceiling figure placed on the numbers of people granted residence status.

Above all, the LR wants to see stringent limits on the rights of the relatives of immigrants to join them in France, to the exclusion of brothers and sisters on top of parents.

Speaking before the National Assembly on Monday evening, Éric Ciotti quoted from a report in French daily Le monde in which a small number of MPs from the ruling LREM party said they were in support of allowing a section of illegal immigrants, those without official documentation, to become regularised. One of those interviewed, speaking on condition his name was withheld, asked the paper, “Do we have to detail that?” Addressing interior minister Gérard Collomb, Ciotti shouted, “Yes, you have to detail that! Yes or no, is there a hidden plan for regularisations?”

Given the tone of the debating on Monday, Éric Coquerel, MP for the radical-left France Insoumise (France Unbowed) party, rounded on the conservatives who he said had succeeded in making an “extreme” piece of legislation to “appear balanced”. Addressing Ciotti and Larrivé, he said, “you are the ‘useful idiots of Macronism”, using a well-worn political phrase to describe those who unwittingly serve a cause they oppose. “You use the fantasies of the far-right by saying that we are threatened with submersion, yet those who are refused asylum represent0.06 percent of the French population,” he added. He was joined by fellow radical-left MP Elsa Faucillon, who described the proposed legislation as a “martial law” which amounted to “twice as less time given to rights, [and] twice as much detention”.

Apart from reducing the time delay for a rejected asylum seeker to appeal the decision against them, from the current one month to 15 days, the bill also proposes reducing the period of time asylum seekers will have to begin the legal procedure to 90 days after arriving in France, down from the 120-day period at present.

For the Socialist Party, whose New Left alliance in the National Assembly numbers just 31 seats after its severe election defeat last year, the president of its parliamentary group, Valérie Rabault, insisted that it was necessary to “disassociate” the notion of asylum from that of immigration, which, on the opposite, the bill of law places on the same level. The socialists have made clear they will support amendments to the bill which oppose the detention of immigrant minors, and the right of asylum seekers to find employment as of the moment they have begun the application procedures (whereas the government’s bill proposes reducing the time delay for a ruling on an asylum requestfrom nine months to six months, after which a person granted asylum is entitled to work).

Caught in the crossfire, interior minister Gérard Collomb attempted to appease those members of his LREM party who have publicly expressed their concerns over what they regard as the severity of the bill – the first open revolt within the party since its landslide victory in last year’s elections, when it gained a huge overall majority of 312 seats out of a total 577. Collomb underlined those measures to improve conditions for immigrants, such as the access to language classes and the speeding up of the processing of asylum requests.

But he refused the proposal put forward by a majority of LREM MPs that children should not be placed in France’s migrant detention centres, called CRAs (for centres de rétention administrative), which usually represent the last stage before deportation. “We will ensure that families remain the shortest time possible in CRAs, but without the possibility of establishing a ceiling [period],” he told the Assembly. “I have made the pledge that we will significantly invest in [improving] the reception conditions, with the creation of spaces designated for families,” adding his recognition that currently the conditions of the CRAs “are often shameful”.

But it is clear that Collomb believes that gaining public support for the new legislation will be won on the Right, as illustrated by his comments that the “migratory crisis” that marked 2015, which he described as unprecedented since World War Two, “has upset our protection structures and tipped a large number of countries into an aggressive and xenophobic populism”. He argued that asylum demands were increasing in France while at the same time they have “diminished in Europe”, and that France’s capacity to house migrants was saturated, insisting on the need for “the sustainability” of immigration policies, a novel term usually applied to debates about the national deficit, also adopted in the LREM’s presentation of the bill.

Meanwhile, the president of the National Assembly’s law commission, LREM MP Yaël Braun-Pivet, took to the floor of the assembly to declare: “We are all, or nearly all, the children or grandchildren of immigrants.” The debates this week promise to be lively.