A century before coronavirus, the economic lessons from Spanish Flu

Along with the medical and health fears over the current coronavirus outbreak, there are also growing concerns about the economic impact of a pandemic on the world. In 1918 and 1919, at the end of World War I, the so-called 'Spanish Influenza' killed close to 18 million people. Yet the impact it had on the world economy at the time is poorly understood. Mediapart's Romaric Godin examines what lessons the deadly Spanish flu outbreak might hold for us today.

On October 11th 1918 the city morgues in Philadelphia were overflowing. The day before 759 people had died from the Spanish Influenza or Spanish Flu which had been ravaging the city and other parts of the United States for more than a month. Bodies were piled up in the corridors and the city had to make use of improvised communal graves to bury the unfortunate victims.

These medieval images, which recall those of the Black Death that struck Europe from 1348 to 1349, highlight the frailty of human organisations when faced with the most severe outbreaks of disease.

Amid fears now of a new pandemic, of the Covid-19 virus, and at a time when there is a great deal of speculation about its likely economic impact, it is instructive to look back at that episode from a century ago to see if there are any lessons to be learned.

There are, from the outset, problems with this approach. Going by newspaper headlines the main problem caused by a Coronavirus pandemic would be its impact on economic growth. France's minister for the economy and finance Bruno Le Maire has acknowledged that growth is likely to be hit by at least 0.1 of gross domestic product (GDP) compared with his previous forecasts.

Economic models are being deployed to come up with estimates of the likely impact. But these models are working in a vacuum as it is impossible to factor in an illness whose direct and psychological effects are still uncertain and which might evolve. The task is made harder by the fact that the only modern reference point for such a pandemic is the 1918-1919 Spanish Flu outbreak about which little has appeared in economic literature. 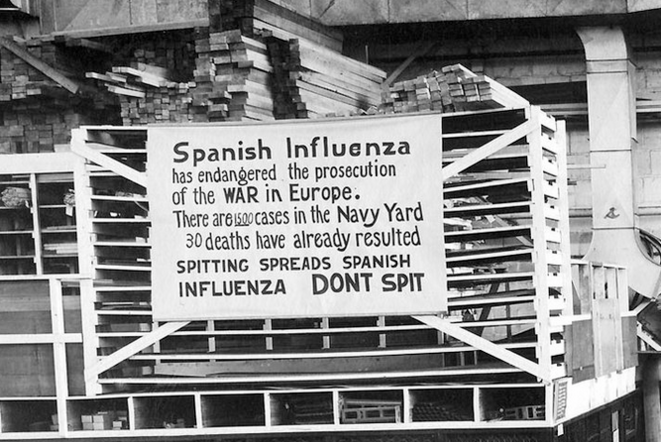 A sign from October 1918 at the Navy Yard in Philadelphia warning people not to spit. © DR
There are few studies about the economic consequences of that pandemic, and those that do exist are generally quite localised. In general there has been academic indifference towards the issue. In economic history texts dealing with that period Spanish Flu is treated, at best, like a passing phenomenon cited just for the sake of completeness. At worst it is ignored.

Professor Adam Tooze's The Deluge: The Great War, America and the Remaking of the Global Order, 1916–1931, deals exactly with this period after World War I, on the economic realignment and the construction of the new world order that it led to. The academic details the economic disorder that followed the war and its lasting effects. But he says nothing at all about the Spanish Flu.

On the face of it, this indifference to the economic effects of that outbreak seems curious. The Spanish Flu, which emerged – probably in China - in the spring of 1918 and then spread across the planet in three waves, was extremely deadly, in particular in the autumn of 1918 and to a lesser extent the spring of 1919. It bears the name 'Spanish' because Spain, which was not involved in the war and was at peace, was where the first official cases were noticed and the name stuck.

Estimates vary as to how many people the outbreak killed. The lowest and most recent, which was published in 2018, estimates that the flu killed 17.8 million people out of a total global population estimated at 1.8 billion. In other words it killed close to 1% of the world population. But studies in 2002came up with estimates of a death toll that ranges from 50 million to 100 million.

Calculations of life expectancy certainly show a real falling off in 1919, in particular in countries that were neutral in or spared by the war. So on one view the pandemic was almost as deadly over two years as WWI was over more than four years, in which around 20 million people perished. So why is it regarded as an anecdotal detail in economic history?

This indifference to the flu's impact only appears to be a paradox, however. For the reality is that at the time that the pandemic hit hardest, in the autumn of 1918, the world economy was already in complete disarray.

The Armistice to end the war was signed on November 11th 1918 but ever since the previous month the fate of the empires involved in the war had been clear. War-time Germany's economy had no more outlets left. Its allies, the Ottoman and Austro-Hungarian empires, were falling apart. Troops from the Triple Entente – Russia, France and Britain – had invaded the Balkans and the Middle East, creating new jurisdictions there which immediately cut commercial and economic ties with their former Austrian, Hungarian and Turkish trading partners.

At the same time Russia, which had been one of the main 'emerging' countries before the war, and which had been cut off from its wealthier territories after the Treaty of Brest-Litovsk in March 1918, was plunged into a civil war between the 'Whites' and the 'Reds'.

Finally, all this took place in a global economy which had been weakened by a long war, a conflict which had led to a reorganisation of production and consumption, and which now had to deal with the return of peace. At the same time class conflicts emerged which had a major impact in some societies.

In other words, when the pandemic arrived the economic situation was already very complex. That is what makes it hard when trying to evaluate the direct economic effects of the outbreak. According to figures from Project Maddison – which continues economist Angus Maddison's aim to calculate GDPs from history – the GDP per head in Western Europe fell by 3.38% in 1918 and by 5.86% in 1919 before growing by 4.01% in 1920. So over two years GDP per head plummeted by 7.78%.

No study has been able to calculate what part the flu pandemic played in this contraction, as opposed to the problems caused by the transition from wartime to peace, by social movements and the disruption of trade.

A graphic detailing the number of deaths from various flu epidemics. © Max Roser/ Our world in data
An additional problem is the fact that data on the issue is scarce and what does exist is based on sparse and sometimes doubtful information. Trying to isolate the effect of the pandemic in these circumstances is very complex. Yet the the 'shock to demand' and the 'shock to supplies' that we fear today also existed during the Spanish Flu episode.

Unlike Covid-19, it seems that the Spanish Flu killed in particular otherwise healthy adults with strong immune systems. So it directly hit the available labour force as well as individual consumers, affecting both the provision of services and production of goods and their consumption.

In the countries at the centre of the fighting, such as France, Belgium, Italy and Germany, wartime death and destruction had already provoked a double shock to the economy. So the losses caused by the flu could have been passed by unnoticed or been looked upon as 'normal'. But that is not the case in those countries which were not directly and massively hit by the conflict such as the United States.

In Philadelphia a total of 150,000 people became ill out of a population of 2 million, in other words 7.5% of the population, and 0.75% of the city's residents died, and it had a brutal impact on the economy. Some of the events then remind us of the panic we see today.

In a work published in November 2007 entitled 'Economic Effects of the 1918 Influenza Pandemic - Implications for a Modern-day Pandemic' Thomas Garrett, who was vice-president and economist at the Federal Reserve Bank of St. Louis, quotes several newspapers from the Midwest from October 1918. On October 19th that year traders in Little Rock, Arkansas, registered a 70% fall in their turnover. Their daily losses were put at 10,000 dollars, the equivalent of 200,000 dollars in 2006 when Garret was writing.

At Memphis in Tennessee half of all telephone operators were off work on October 5th and more than a quarter of public transport employees. On October 18th there were reports that production in Tennessee coal mines had fallen by 50% and there was talk of their possible closure. But Thomas Garrett's work does not go much further than these observations.

Furthermore, the growth figures from the Maddison Project do not show a recession linked to Spanish Flu in countries such as the United States. The overall GDP per head of the British dominions – Australia, Canada and New Zealand - and the United States shows a growth of 6.1% in 1918. That makes sense because at the time their industries were at full tilt trying to ensure an Allied victory.

But when you look at the 1918 and 1919 figures it is hard to see a direct, measurable and indisputable impact caused by the pandemic even though the US, Canada and Australia were very badly hit by the illness. The data suggests that the Spanish Flu did not directly cause a recession.