French utility giant EDF is facing mounting pressure to abandon its project to build two nuclear reactors at Hinkley Point in south-west Britain. Days after the resignation on March 7th of the state-owned group’s finance director over the financial risks involved, it was the turn of France’s national court of auditors to sound the alarm amid a damning report on EDF’s international operations. Martine Orange reports.

State-owned utility group EDF is in an increasing predicament over its unfinalised deal with the British government to build two pressurised water reactors (EPRs) at Hinkley Point, a nuclear plant beside the Bristol Channel in south-west Britain.

The project has caused deep divisions among the EDF board and has also met with opposition from staff unions. Last Monday, EDF finance director Thomas Piquemal resigned over his concerns of the financial risks involved in the venture. These centre on the recurrent problems for EDF with its building of similar EPRs in France and Finland, which have caused huge delays and gone well over budget.

The new nuclear reactors at Hinkley Point, managed by EDF’s British subsidiary EDF Energy (formerly British Energy), are due to enter service in 2023, but EDF chairman and chief executive Jean-Bernard Lévy has yet to announce a final decision to invest in the half-inked project which is officially estimated to cost 25 billion euros. Lévy is in favour, and is backed by economy minister Emmanuel Macron.

But just days after EDF’s finance director quit in protest at the dangers of the deal, it was the turn of the French national audit body, the Cour des Comptes, to voice alarm over the venture.

“While it is not as yet a finalised operation, the very complexity of the cited [financial] structure, and above all the manner in which it might impact EDF’s responsibility, are sufficient to raise strong questions,” reads a report by the Cour des Comptes (Court of Accounts) published on March 10th. 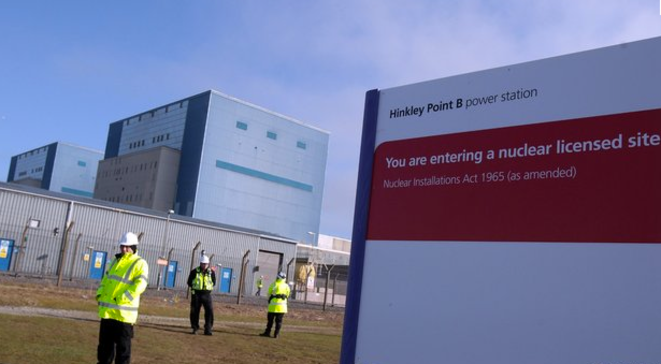 The Hinkley Point plant, in the English county of Somerset. © EDF

Significantly, the auditors more usually report on the past actions and money wasting of French public institutions and companies. The warning contained in the document, which was more largely a report on EDF’s international activities between 2009 and 2014, was made, they said, because of “the potential impact for the French state of the risk of losses that EDF runs in projects of this size”.

The report raises concerns over the contract prepared between EDF and the British government. The deal guarantees that EDF, once the reactors are onstream, can price its electricity at £92.5 (about 120 euros) per MWh, and this for a period of 35 years (with a clause for adjustments according to inflation). “The concluded agreement therefore implicates a stable and foreseeable sale price for EDF Energy,” observe the auditors. “If the electricity market price exceeds the price set out in the contract, consumers will not have to pay more. If the market price is under the price set out, the operator [EDF Energy] will receive a supplementary payment.”

Echoing the alarm raised by many within EDF, the auditors doubt the group’s ability to finish the building of the reactors by 2023 as planned, given the huge delays caused by technical problems and the budget-busting in the building of EPRs at the Flamanville nuclear power station  in northern France, at Olkiluoto in Finland and Taishan in China.

“The experience of the delays in the entering into service of the nuclear power plants of Olkiluoto, Flamanville and Taishan can obviously raise questions over the capacity of the project at Hinkley Point to keep to the initial timetable,” says the report. “If the cost of the construction is higher than the predicted amount, the added cost will be assumed by EDF and its minority partners,” the report continues, “whereas in the case of a super-performance, because of the mechanism set out in the contract, EDF will have a ceiling placed on its profits to the benefit of British consumers.” In other words, EDF is placed in a position of taking on all the financial risks in the project without any opportunity for a bonus in profits in the – however unlikely – event that all went better than planned.

The auditors’ report details previous blunders in EDF’s operations abroad, when the company was aiming to become a worldwide group, centring entirely on nuclear power to the exclusion of renewable energies. These include its purchase in the US in 2008 of stock in the then almost bankrupt – and now defunct – Constellation Energy Group, which the auditors described as an “expensive failure”. That operation was carried out with the blessing of the French government and notably the agency that manages the state’s majority holdings in companies, the Agence de Participations de l’État (APE).

The auditors observe: “The audit report on the conditions surrounding this operation, commissioned by EDF at the beginning of 2010 and carried out by the firm Accuracy, details that ‘the CENG [Constellation Energy Group] operation is a complex operation that is risk-prone (notably because of the lack of knowledge about the financial details of the entire purchased entity) and over which prior investigations [...] were virtually inexistent. Thus [...] CENG today presents a lower EBITDA than those that were estimated before the offers were placed in 2008’.”

After paying over the odds for the Constellation Energy Group in face of a rival bid, EDF also had to pump 1 billion dollars into the ailing US company. After that, it had to pay out to undo the surrender options made during its purchase of the company’s stock. “The operation Constellation Energy Group-CENG-Unistar should, by December 31st 2014, have cost about 6.5 billion dollars, of which almost 5 billion went into the purchase of the CENG,” the auditors report. “That sum, however, does not represent the final cost of the operation, which will depend upon spending still to come (notably impairment losses) and the price of the final sale.”