Across Europe, governments have brought in massive budget cuts totalling up to 400 billion euros to stem rising deficits. Ministers say the cuts are necessary to bring about economic stability and reassure the markets. Critics say they are unjust, hitting the poorest the hardest, and unsound, marking a return to failed economic dogmas of the past. So are these so-called austerity plans really unavoidable? What do all these billions in announced savings really represent - and could these drastic plans in fact kill off any return to economic growth?

On Wednesday, December 15th, while the European Trade Union Confederation called for a continent-wide day of action against austerity measures, violent clashes against budget cuts shook the Greek capital Athens. As the rating agency Moody's announced it might downgrade Spain's credit rating, causing the euro to fall, Ireland was adopting its fourth austerity plan in three years.

"In the spring of 2010, fiscal austerity became fashionable," were the disenchanted words of the American Nobel prize winner for economics Paul Krugman on October 21st, following the vast austerity plan unveiled in the United Kingdom. They are the regrets of a confirmed Keynesian, all too aware that the old orthodox economic dogmas are back. After a period of economic stimulus, the moment comes when bills have to be paid.

The sovereign debt crisis in Europe has sparked a mad dash to reduce public spending deficits. To satisfy both the credit rating agencies and investors first Greece, then Ireland, adopted austerity plans of historic proportions. As one, the whole of the euro zone, including France, has adopted the idea of budget cuts. But just what do these billions of euros in savings actually represent? Here, Mediapart's Mathieu Magnaudeix takes a closer look at the figures announced, and examines whether governments had other choices available - and whether the cuts might in fact end up destroying economic growth. 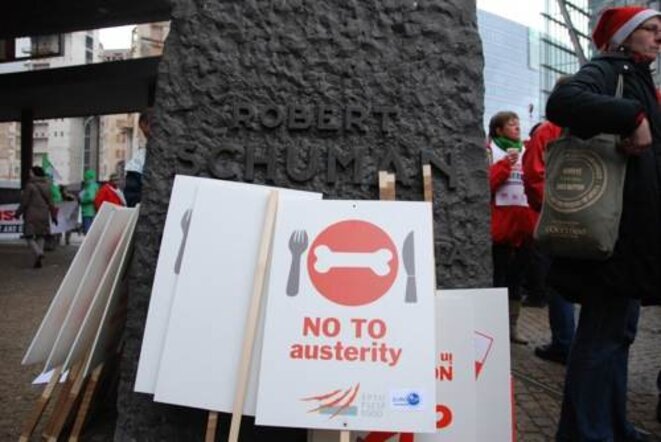 A study published in October by the French bank Société Générale estimated that the total amount of spending cuts announced among Europe's national economies, staggered over several years, totalled "more than 350 billion euros". That was before the Irish plan presented at the end of November envisaging some 15 billion euros in cuts. So the total is now close to 400 billion euros all told. It's a considerable sum, but one which in isolation doesn't mean much. To gauge its importance it must be measured against each country's gross domestic product (GDP).

Greece and Ireland are the champions of austerity measures. The first to start the movement at the beginning of 2010 was Greece, which has come up with four successive programmes of tax increases (on VAT, tobacco, alcohol, petrol and the wealthy) and then a huge programme of cuts over three years. This included measures on VAT and fuel again, plus removing annual bonus payments for civil servants and pensioners1. The total is 35 billion euros in savings over three years, the equivalent of 17% of the country's annual GDP.

1: In Greece, civil servants and pensioners have traditionally received two extra months salary or pension a year - known as 13th and 14th month payments - as bonuses.