The future of Egyptian President Hosni Mubarak's regime remains uncertain amid a popular protest unprecedented in all his 31-years in power. In a country subjected to more than 30 years of State of Emergency laws, the internet has become a unique refuge for democratic discussion and debate. Mediapart editor François Bonnet meets the bloggers and other cyber activists who have, for years, led the charge for free speech in Egypt.

The introduction to this article was updated 31/1/2011: The future of Egyptian President Hosni Mubarak's regime remains uncertain amid a movement of popular protest unprecedented in all his 31-year rule.

Just as in Tunisia, the explosion of unrest that reached the streets on 25 January is a climax of years of simmering revolt against corruption, unemployment and rising prices. It has also similarly illustrated in a dramatic manner the key role of the internet and social networks in bypassing the censorship of an authoritarian regime. Websites, blogs, Facebook, YouTube and Twitter have become essential tools for dissidents to communicate and spread revolt, as highlighted in a US diplomatic cable revealed this week via the Wikileaks disclosures.

On 28 January, Mubarak, 82, ordered the interruption to internet connections across the country and a suspension of mobile and landline phone services in certain areas. That followed interference earlier during the week with connections to Twitter and Facebook.

In a country subjected to more than 30 years of State of Emergency laws that have effectively muzzled the traditional media, the internet has become, notably over the past five years, a unique refuge for democratic discussion and debate. "Violence will not address the grievances of the Egyptian people, and suppressing ideas never succeeds in making them go away," US President Barack Obama said on Friday.

Mediapart editor François Bonnet travelled to Egypt last year to meet with some of the country's most prominent cyberspace human rights activiists. Presented here in the following five portraits, they provide a chilling insight into the events that were to erupt this month.

A former lawyer involved in several high-profile human rights cases in Egypt, Gamal Eid is now the executive director of the Arabic Network for Human Rights Information, ANHRI, which he founded in 2004 (click here for its website in English). ANHRI is the largest association for the defence of freedom of information in the Arabic world, built as a network for the surveillance of the abuse of fundamental freedoms. His outward good humour hides with difficulty his inner deep concerns. He says that every morning, after he arrives at work in central Cairo, he can never be certain of returning home at night. 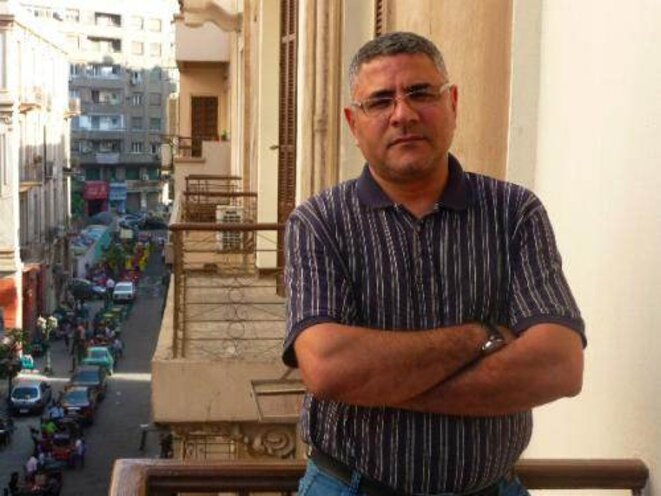 Veteran human rights campaigner: Garmal Eid. © François Bonnet
"The government is a lot more dangerous today than it was in 2004 and 2005, because the situation is very unstable," he says. "It is something new for the authorities. People are less afraid, there have never been as many demonstrations, the country is in fervor. Everyone feels very well that it is the end of a certain world, no-one wants Mubarak's son, new networks are being created. The 2011 elections will be the most important since those of the 1960s."

A veteran legal combatant in cases launched against the press, Eid is today one of several lawyers defending numerous bloggers who have been targeted by the Mubarak regime.

"Journalists can be arrested, prosecuted, but are rarely imprisoned," he explains. "This is not the case for bloggers who have less protection under law. In May, three of them were imprisoned. One was sentenced to three years in prison and a heavy fine for having written a poem of six verses that was judged to be insulting towards President Mubarak. In another case, a judge attempted to ban 49 internet sites in one go."

The country's legislation and its interpretation are akin to moving goal posts. The State of Emergency, in vigour since 1967 save a brief interruption between 1980 and 1981, was modified last year, when it became less restrictive towards the press. But it still allows the authorities wide room for manouevre.