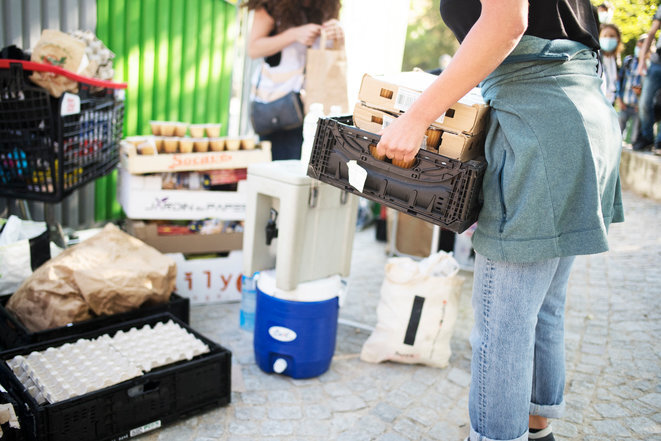 Up to seven million people in France, or around 10 percent of the population, had need of free handouts of food in 2020, a situation unprecedented in peacetime. That was just one of the shocking conclusions of the latest annual report on poverty in France published by one of the country’s principal social and humanitarian aid associations, the Secours Catholique. Faïza Zerouala reports.

The tragedy in the Channel, and the fears of more to come 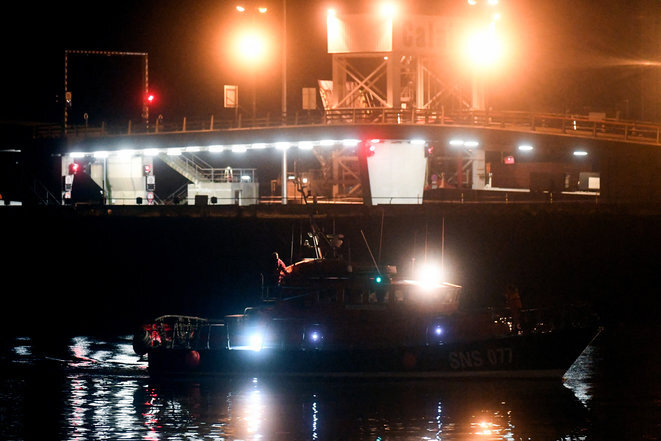 At least 27 people, including three children and seven women, one of who was pregnant, died in the Channel off the French port of Calais on Wednesday as they attempted to reach Britain in a clandestine journey by dinghy, according to the latest official toll. Sheerazad Chekaik-Chaila reports from Calais on the scenes as recovered bodies were brought to the quayside after the deadliest known tragedy involving migrants attempting to cross the Channel, and one which rescue services warn could be repeated with the arrival of treacherous winter conditions. 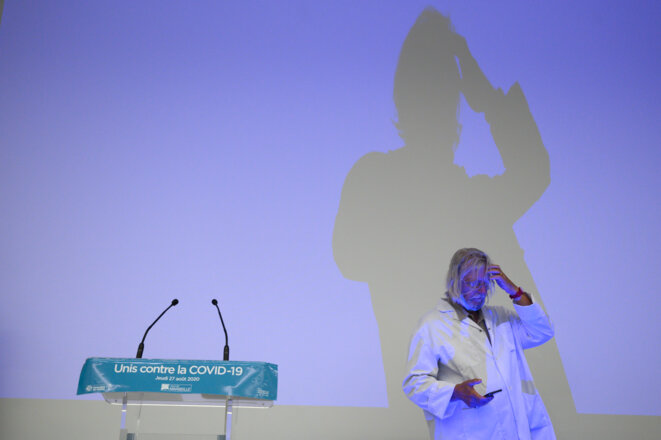 Staff working under French microbiologist Didier Raoult, who last year attracted worldwide attention, and notably from Donald Trump, with his claims that the anti-malaria drug hydroxychloroquine was an effective medication for the prevention and treatment of Covid-19, have accused him of falsifying biological test results to support his assertions. Pascale Pascariello reports. 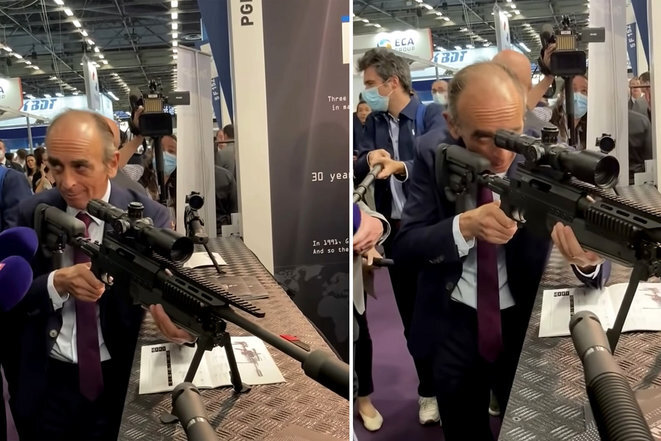 The threats against journalists, including one of our own, by far-right supporters in France are intolerable, write Mediapart co-editors Stéphane Alliès and Carine Fouteau in this op-ed article. It is high time for French President Emmanuel Macron, preoccupied with ensuring a second mandate in the presidential elections due next April, to take proper measure of the danger that is afoot. 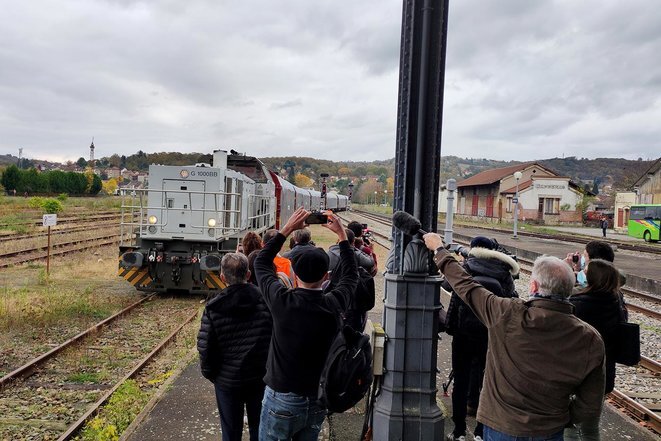 Railcoop, a small French cooperative railways company this week inaugurated its first service, carrying freight for small businesses in the south-west of the country. The cooperative is the first of its kind in Europe, and it has big plans ahead, beginning with the opening next year of a passenger service across central France linking the cities of Bordeaux and Lyon and, along the way, dozens of small towns previously abandoned by France’s historic railways operator, the SNCF. As Nicolas Cheviron reports, for the cooperative's staff and stakeholders the launch this week was a two-year dream come true.

How French defence firm Thales placed a mole inside the UN 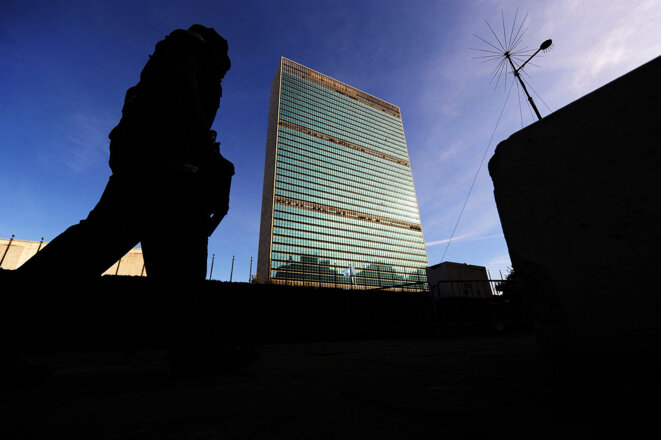 From 2016 to 2019 an officer in the French air force reserve worked for the United Nations in New York in a technology and communications department that helped support peacekeeping missions. Officially the French military had seconded his services free of charge to the UN. But in reality the experienced officer was working for and being paid by France's major defence and electronics firm Thales, according to documents seen by Mediapart. As Yann Philippin and Antton Rouget report, senior figures in the French state were aware of what was going on.

Suitcases of cash, threats and violence; the fallout from the Sarkozy-Takieddine affair 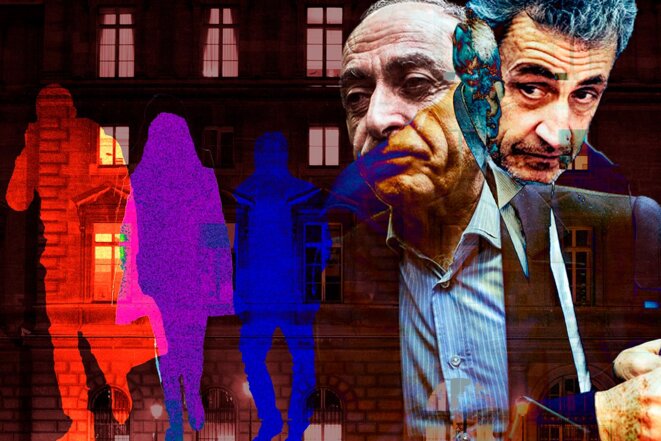 Two people have been remanded in custody in the aftermath of the operation in which Ziad Takieddine, a key witness in the Nicolas Sarkozy-Libyan funding affair, made a false retraction of his evidence. One of the men in detention is the wealthy businessman Pierre Reynaud. As Mediapart can reveal, aspects of the saga have taken on the appearance of a Martin Scorsese crime movie. Fabrice Arfi, Karl Laske and Antton Rouget report. 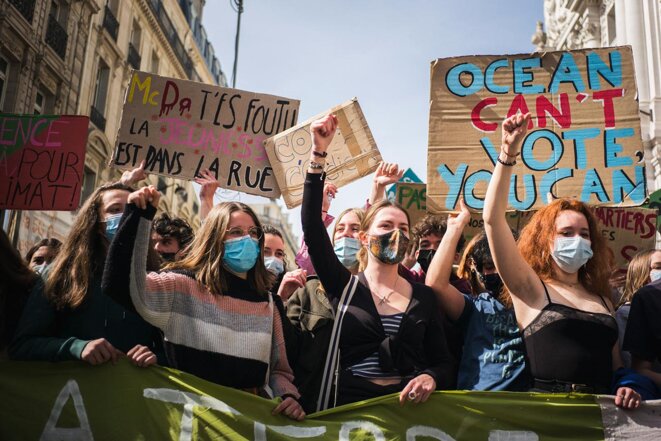 Demonstrators at the March for the Climate in Paris, March 28th 2021. © Photo Thomas Dévényi / Hans Lucas via AFP

As the 2022 presidential election edges closer there are signs that the swathe of young people who have become radicalised over the climate in France since 2018 are now starting to take a closer interest in politics and the need to vote. But as Mathieu Dejean explains in this analysis, the fragmentation on the Left ahead of next April's poll leaves many young 'climate generation' voters distinctly unimpressed.

Revealed: the extraordinary plan to free one of Gaddafi's sons in bid to help Sarkozy 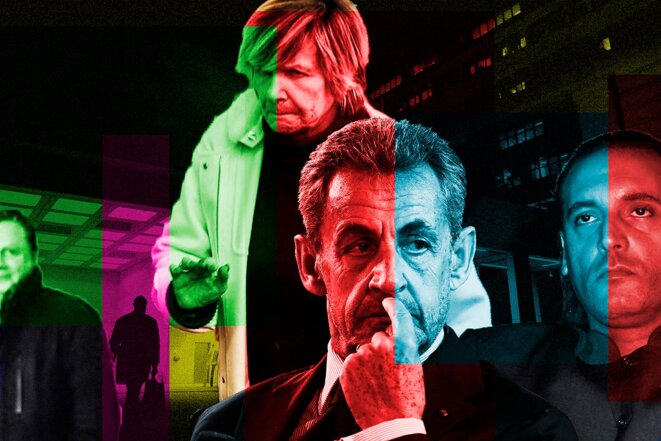 France's financial prosecution unit the Parquet National Financier (PNF) has broadened the scope of its investigation into claims that Ziad Takieddine, a key witness over allegations that Libya helped fund Nicolas Sarkozy's 2007 presidential campaign, was induced to change his evidence. Well-connected Paris paparazzi boss Michèle 'Mimi' Marchand is one of those under investigation over the allegations. Prosecutors now also want to look at suspicions of an extraordinary plan to bribe judges in order to free one of the late Libyan dictator Muammar Gaddafi's sons from prison in Lebanon. The idea was that, in exchange, a grateful Hannibal Gaddafi would then speak out and clear the former president's name over the 2007 election funding allegations. As Fabrice Arfi, Karl Laske and Antton Rouget report, the affair could potentially now become an international scandal. 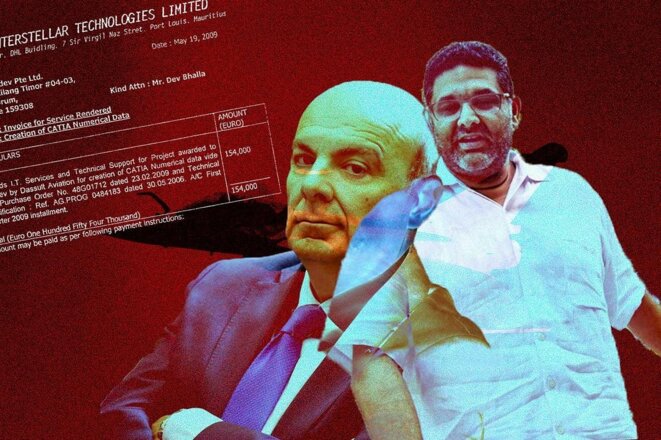 Mediapart is today publishing the alleged false invoices that enabled French aircraft manufacturer Dassault Aviation to pay at least 7.5 million euros in secret commissions to a middleman to help secure the sale of 36 Rafale fighter aircraft to India. Yet despite the existence of these documents, the Indian federal police has decided not to pursue the affair and has not begun an investigation. Yann Philippin reports. 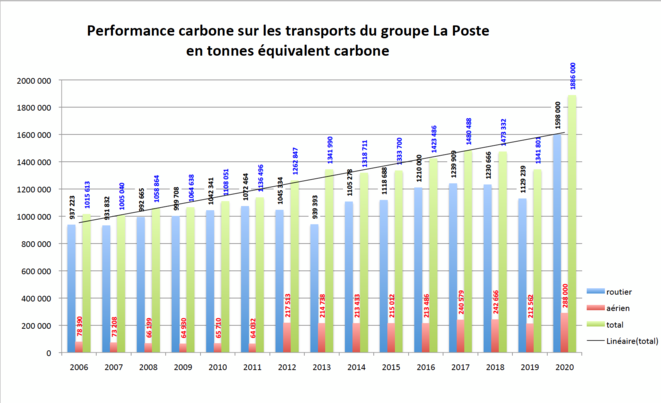 The graph shows the performance of La Poste's mail transport in terms of C02 emissions over 15 years. © Mediapart

In its public utterances France's portal service La Poste makes great play of its “carbon neutrality”. Yet an analysis shows that over the last decade and a half the publicly-owned postal group has been emitting more and more carbon dioxide each year transporting letters and parcels. The reason for this is the operator's complete reliance on using the most polluting forms of transport – air and road – to carry the mail. Mediapart's environment correspondent Jade Lindgaard reports. 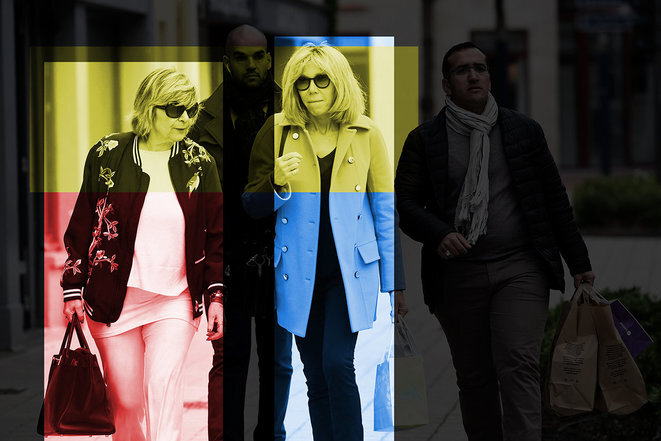 In a tapped phone conversation in July, Brigitte Macron, wife of France’s president, told paparazzi agency boss Michèle Marchand, an influential PR fixer to politicians who is formally placed under investigation for witness tampering and criminal conspiracy in a case related to a probe into suspected Libyan funding of former president Nicolas Sarkozy’s election campaign, that she was to contact her security officer for help “if you get bother”. After she encouraged Marchand to “stay firm” following the latter's release from jail, Brigitte Macron also deplored the “terrible” judicial treatment of Sarkozy. Fabrice Arfi, Karl Laske and Antton Rouget report. 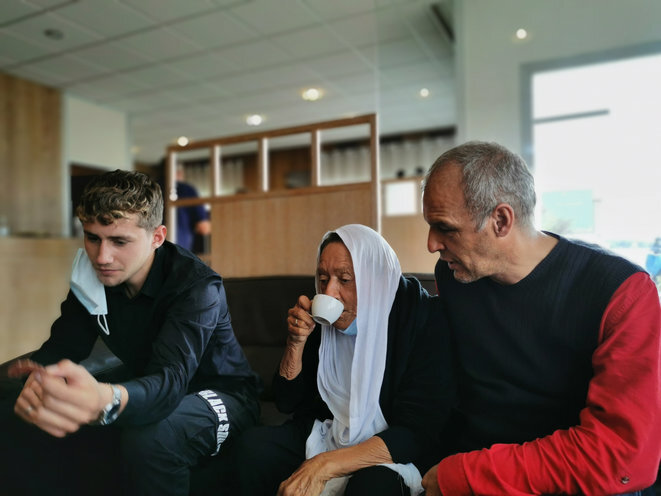 Sophie Pétronin with her son Sébastien and his own son on her arrival back in France on October 9th 2020. © AF

News emerged at the weekend that former French hostage Sophie Pétronin, 76, who was held captive for almost four years by an al-Qaeda affiliate in Mali until her release in October last year, secretly returned to the West African country in March, and has since been living with her adopted daughter in the capital Bamako. Her presence in the country was made public after the Malian authorities on Saturday issued a warrant for her arrest, for reasons that are still unclear. In this report for Mediapart, journalist Anthony Fouchard, who is close to Pétronin and her family, reveals the details of how the humanitarian worker, together with her son, succeeded in the long clandestine journey to Bamako.

Paris attacks trial: 'Do we all feel the same about the accused and jihadism? Obviously not' 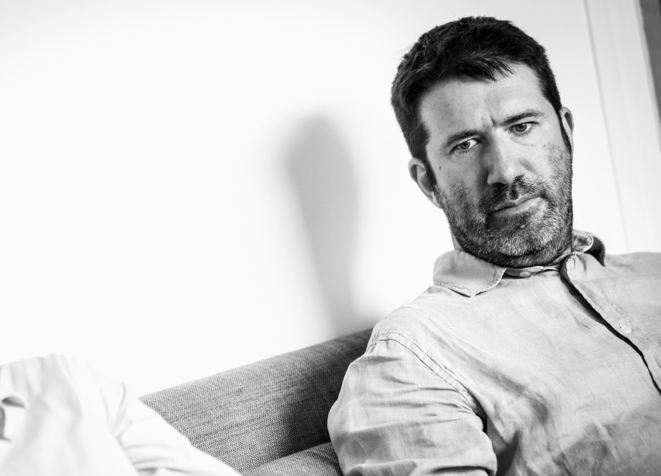 The trial of 20 individuals accused of variously perpetrating or helping to carry out the November 13th 2015 terrorist attacks in Paris continues. As part of its regular coverage of the hearings, Mediapart is publishing the first-hand reactions of seven victims of the massacres as they take part in, and follow, the court proceedings. Here, schoolteacher Christophe Naudin, who survived the shooting massacre at the Bataclan concert hall in which one of his closest friends died, reflects on the five weeks during which the civil parties have been giving evidence, and begins by recounting his own turn, last week, at taking to the witness stand.

Islamophobia and the shyness of the French Left 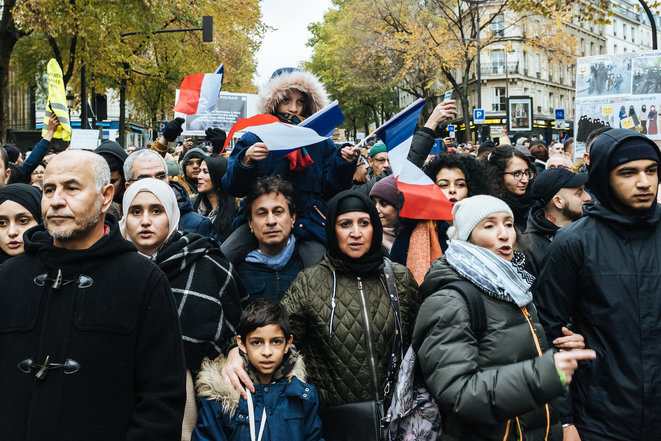 A number of Muslim organisations in France considered by the government to be linked to radical Islamic movements have been dissolved by decree since the gruesome October 2020 terrorist murder of school teacher Samuel Paty. While some of the dissolutions have been criticised as unjustified and counter to public freedoms, the broad French Left of political parties and civil society stands accused of shying away from an issue that is a political hot potato, instead choosing to observe what the head of one Muslim association called a “deafening silence”.  Mathilde Goanec reports.