'We can't allow an ex-president to forget about the Republic': prosecutor urges two years in jail for Sarkozy 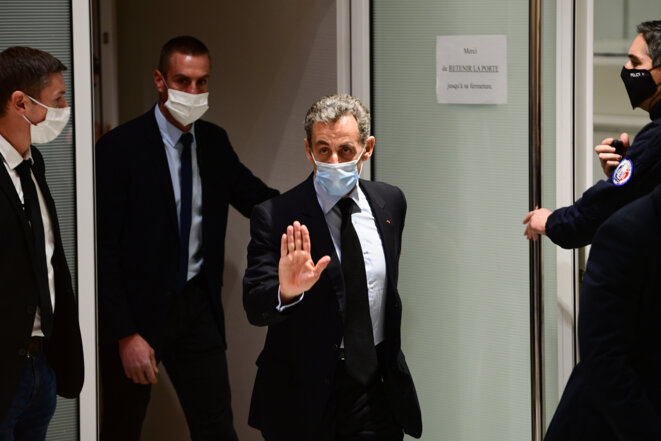 The prosecution has called for Nicolas Sarkozy to be given a four-year prison sentence, with two years suspended, in the closing stages of the former president's corruption trial in Paris. Prosecutors also called for a similar sentence for Sarkozy's friend and lawyer Thierry Herzog and retired judge Gilbert Azibert. Mediapart's legal affairs correspondent Michel Deléan was in court to hear the prosecution sum up their case.

Sarkozy gives evidence at corruption trial: 'My life has been about lending a hand' 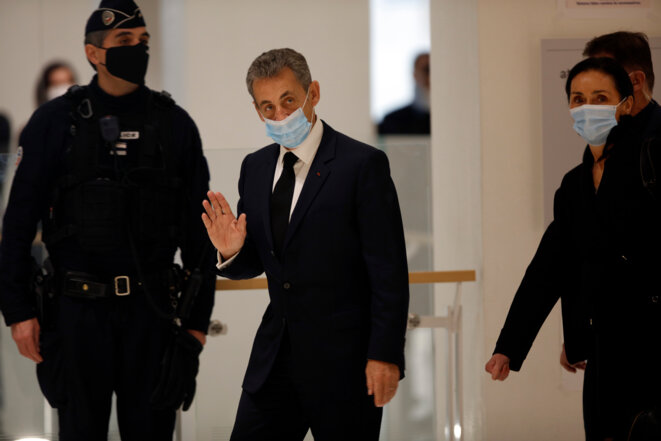 Nicolas Sarkozy and his lawyer Jacqueline Laffont at the court in Paris on November 26th, 2020. © Mehdi Taamallah/NurPhoto/AFP

Former president Nicolas Sarkozy has given evidence at the corruption trial in Paris where he is accused of trying to bribe a senior judge in return for confidential judicial information. The ex-head of state was full of anger and indignation at the allegations that have been levelled against him. “I swear to you, the idea that we were doing something we shouldn't could not have been further from my mind!” he told the courtroom. Mediapart's legal affairs correspondent Michel Deléan was in court to hear Nicolas Sarkozy proclaim his innocence on all charges. 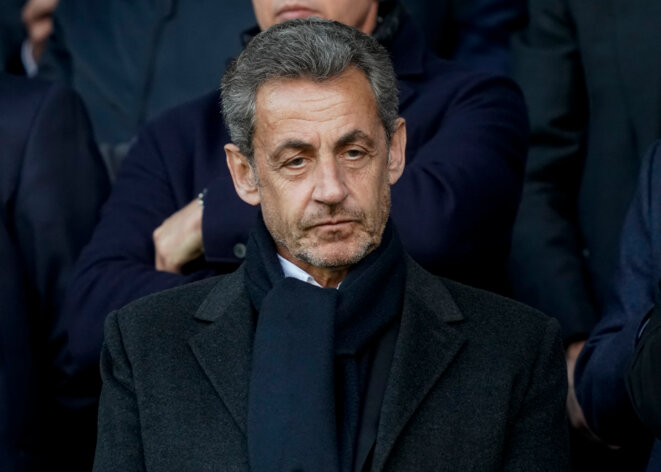 Nicolas Sarkozy at Nice in May 2019. © Lionel BONAVENTURE / AFP

When Nicolas Sarkozy was being questioned by judges over claims that his 2007 president election campaign was part-funded by the Libyan regime, he agreed to hand over his official diaries from that period. However, Mediapart understands that his lawyer has now told the judges that the former president is unable to provide any of them. This sudden about-face comes right in the middle of Nicolas Sarkozy's ongoing corruption trial, in which those very same diaries play a prominent role. Fabrice Arfi and Karl Laske report. 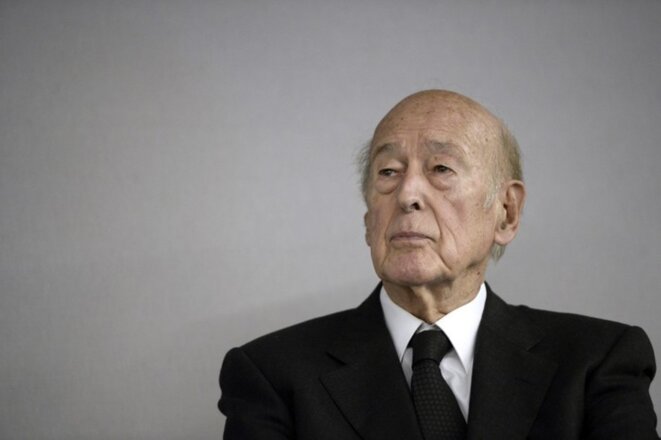 The death was announced late on Wednesday December 2nd 2020 of Valéry Giscard d’Estaing, aged 94, who was president of France from 1974 to 1981. Here Mediapart's François Bonnet compares Giscard's term of office with the current presidency of Emmanuel Macron. He argues that in a provisional assessment of their achievements the record of the present incumbent of the Élysée does not compare well with his predecessor, especially on social issues. However, there are many similarities between the two men and their presidencies, including the way they came to power and, most ominously, their subsequent slide towards more repressive policies.

Confusion and delay: Sarkozy corruption trial gets off to uncertain start 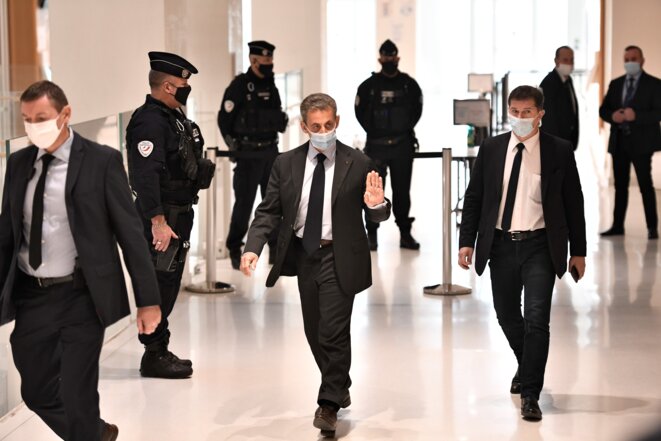 Nicolas Sarkozy at the court building in Paris for his trial, November 30th 2020. © Stéphane de Sakutin/AFP

The high-profile trial of Nicolas Sarkozy, in which he is accused of trying to use his influence to find out confidential judicial information, is finally under way in Paris. But the case, the first in which a former French president has faced corruption charges, has been beset by a string of disruptions and by sometimes confusing legal disputes. The result so far, says Mediapart's legal affairs correspondent Michel Deléan, is a trial that has not yet done justice to the issues that are at stake. 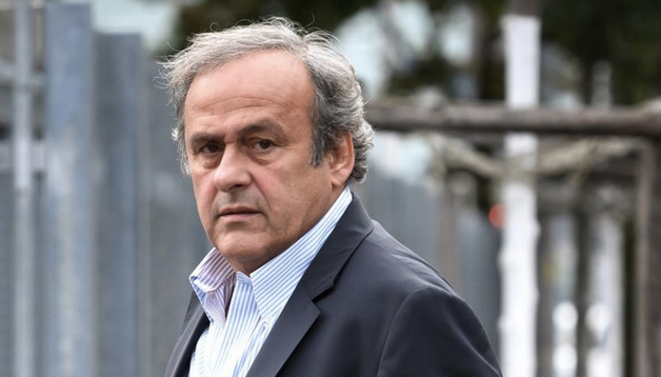 Mediapart has learnt that the prosecution authorities in Switzerland are investigating the former French football star and ex-head of European football body UEFA Michel Platini for alleged fraud over a 1.8 million euro payment he received in 2011. That payment was made by Sepp Blatter, then head of world football's governing body FIFA, who also faces a similar probe. Yann Philippin reports. 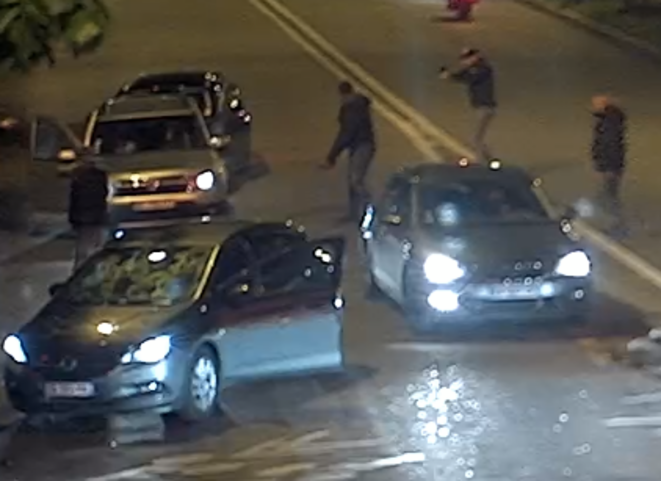 CCTV images captured the illegal arrests of six innocent young men in April 2019, and the moment one officer fired at their vehicle (full video in the article page).

As incidents of police violence and the failure of the authorities to effectively address the issue continue to occupy public debate in France, Mediapart reveals here, with video footage, the violent and illegal arrests in Paris of six innocent young men by gun-wielding officers, one of whom fired bullets into their car. In what has all the appearance of a cover-up, not only was one of the six victims sent for trial for violence, but the officer who shot at him without any justification is still on duty because, the police administration claimed, prosecutors concluded he acted in self-defence. Which is untrue. Pascale Pascariello and Armel Baudet report. 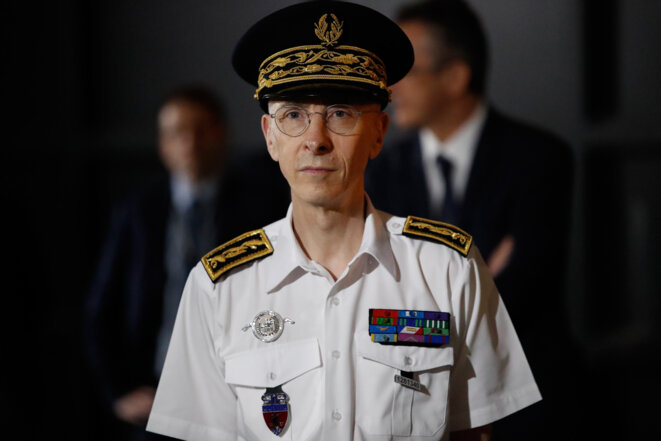 Paris police prefect Didier Lallement has courted controversy before and after his appointment last year as the capital’s law and order chief. Despite his rough-and-tough policing strategy, notably of demonstrations, and his insensitive public comments, this adept of pomp and high-handed authority has survived thanks to the backing of the executive. But, as Camille Polloni reports, following the public and political outrage over separate shocking incidents last week of police violence, he may now be facing the door.

An image of Michel Zecler following the assault by three French police officers in Paris on November 21st. © Loopsider

There has been widespread outrage in France after video footage emerged of three police officers apparently gratuitously beating a black music producer in Paris, who was left with serious injuries from punches, kicks, baton blows and the explosion of a tear gas grenade in his studio last weekend. François Bonnet argues here that the events highlight how interior minister Gérald Darmanin has made a policy of flattering the most extremist fringes of the police, creating disorder amid heightened police violence. It is high time, he writes, for Darmanin to go. 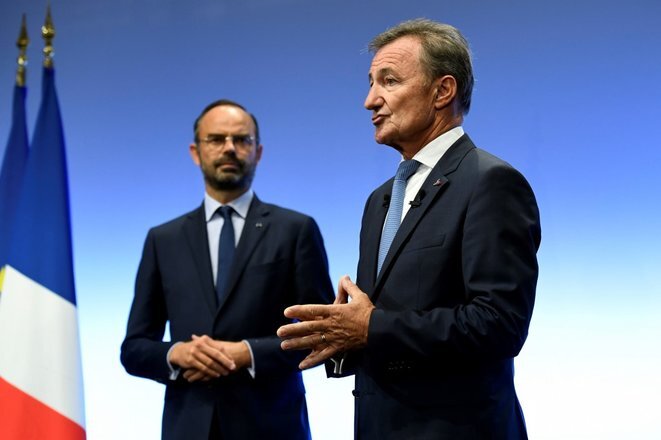 The latest annual report by investors’ advisory agency Proxinvest on the remunerations paid to the chief executives of France’s 120 most traded stock exchange companies reveals a staggering increase in payments in 2019. In this op-ed article, Mediapart economy and finance correspondent Laurent Mauduit details the figures and argues why they represent a serious injustice when millions of French households face an economic crisis that threatens to plunge them into poverty.

The disgraceful events of the Place de la République 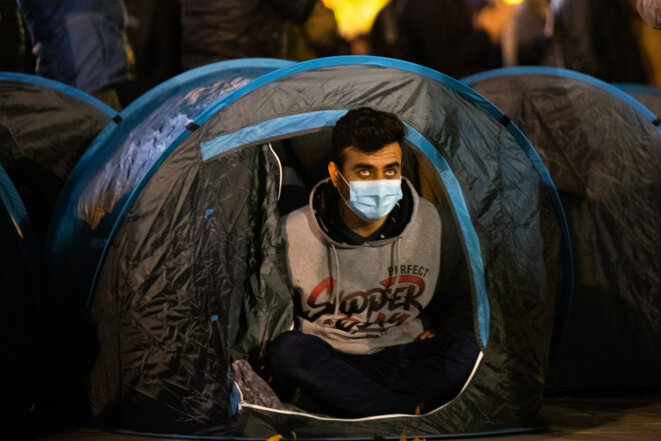 On Monday evening in central Paris, migrants and journalists were physically abused by police engaged in a brutal, manu militari evacuation of a makeshift camp set up on the Place de la République. The police violence was exposed in images circulating on social media and which would be banned if draft legislation currently before parliament is approved. In this joint op-ed article, Mediapart co-editor in chief Carine Fouteau and social affairs editor Mathilde Mathieu argue that the overnight events are a representation of the liberticidal drift of President Emmanuel Macron’s administration, and may prove to be a political turning point. 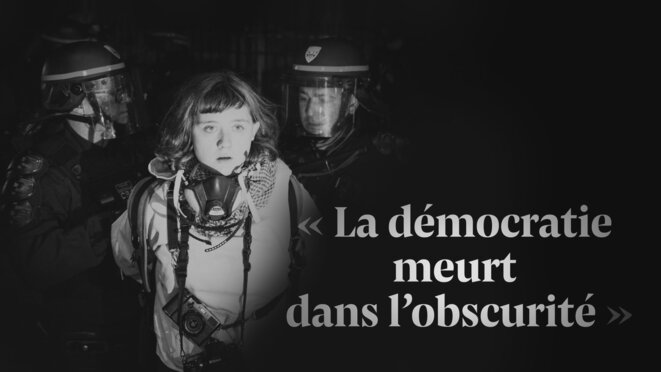 Draft legislation which includes handing increased powers to police and expanding the remit of surveillance operations is now being debated in the French parliament following its first passage through the lower house on Friday. One of the articles of the “Global security” bill will severely restrict the taking and dissemination of images of on-duty police officers. Mediapart staff joined journalists’ unions and rights groups on Saturday in a demonstration in Paris against the bill. Mediapart’s publishing editor Edwy Plenel argues here that what is at stake in the proposed legislation is of exceptional gravity. If it is adopted, he writes, “the lights of democratic vigilance over actions of the state will be extinguished”.

'Beirut 2020', the chronicle of a country in collapse

Lebanese author Charif Majdalani has put aside fiction to write an account of the profound economic and social crisis of his country, so tragically illustrated by the deadly mega-blast in the port of Beirut in August, with the publication in France this autumn of a diary, Beyrouth 2020; journal d’un effondrement (Beirut 2020; the diary of a collapse). Lucie Delaporte reviews this moving and nostalgic reflection on the demise of Lebanon, once dubbed “the Switzerland of the Middle East”, which nevertheless sees a spark of hope amid the rubble.

Released online earlier this month, Hold-Up is a French pseudo-documentary which promotes the conspiracy theory that Covid-19 was created in a plot by a group of powerful individuals to reshape the world in their interests. Despite the absurdity of the idea, and its inability to produce evidence to support its case, the film attracted an audience of more than three million in the first week of its appearance. Lucie Delaporte reports on an exercise in manipulation of the gullible.

The Beirut mega-blast: a reconstruction of the timeline of an avoidable tragedy 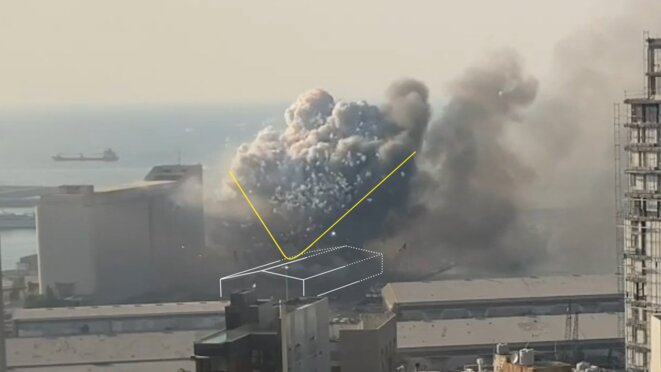 On August 4th this year, a huge explosion ripped through the port of the Lebanese capital Beirut and the surrounding city neighbourhoods, killing more than 200 people, wounding more than 6,500 others and leaving hundreds of thousands homeless. It was so powerful that the shockwaves and tremors it caused were recorded hundreds of kilometres away. Now, London-based independent research group Forensic Architecture has produced a remarkable video report with 3D imaging, using documented evidence and expert input, to piece together a precise chronology of the multiple causes of the explosion, and which Mediapart presents here.