Is the French Left already resigned to defeat at the 2022 presidential election? 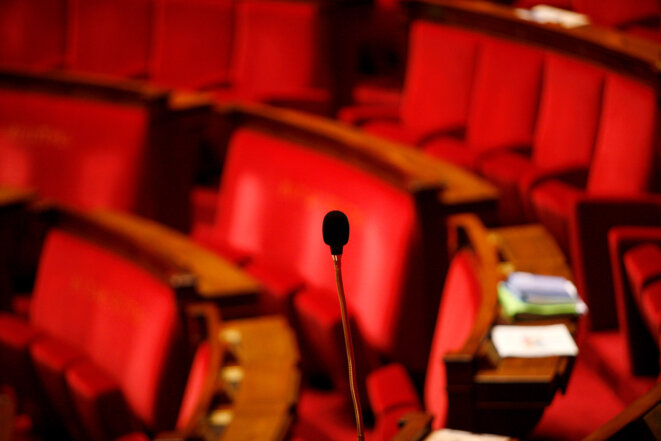 Various factions on the Left are already focussing on the Parliamentary elections in June 2022, in apparent acceptance that they are unlikely to perform well at the presidential election that takes place two months earlier. Opinion polls currently suggest that the battle to be the next French head of state in April 2022 will primarily be between the incumbent president Emmanuel Macron, the far-right and, just possibly, the traditional Right. The subsequent Parliamentary elections, to be held over two rounds on June 12th and June 19th, will meanwhile determine the political influence of the various parties on the Left in the National Assembly. Mathieu Dejean and Pauline Graulle report on the potential horse-trading among the Left ahead of those legislative elections and the impact this may have, too, on the race for the presidency itself. 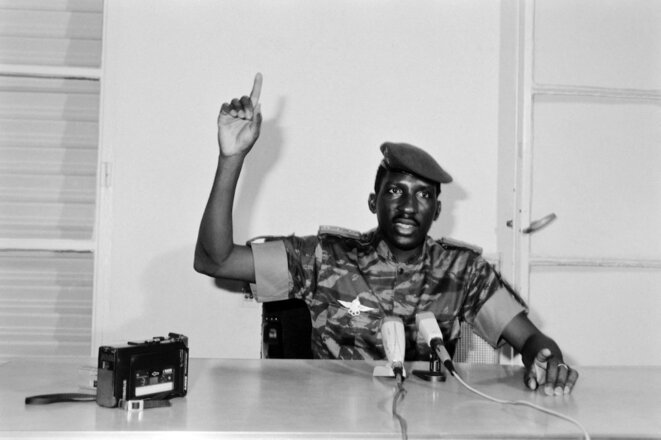 In 1987 Burkina Faso's president Thomas Sankara, a revolutionary leader, hero of the pan-Africa movement and fierce opponent of imperialism, was gunned down in a coup d'État. Now, 34 years later, the trial of his alleged assassins is shortly to begin in the capital Ouagadougou. As Rémi Carayol reports, the circumstances of the murder are well known. But what we still do not know is who gave the orders for Sankara's assassination, which brought his Burkina Faso revolution to a bloody end. Nor do we know the role, if any, of foreign powers - including the former colonial power France - in his demise.

Paris attacks trial: 'I wanted to see them, to tell them all they've taken from me' 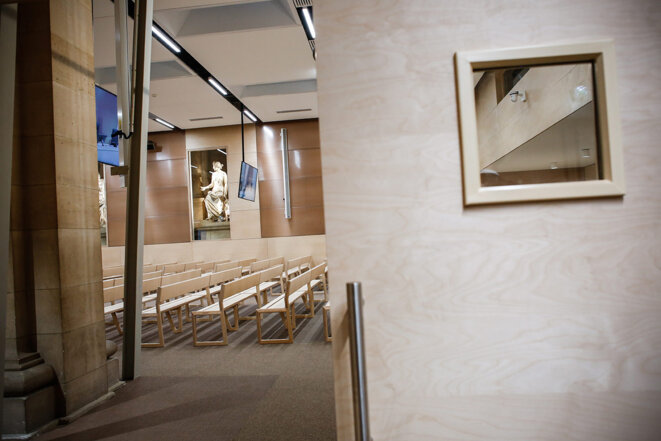 The courtroom used for the trial relating to the Paris terrorist attacks of November 13th 2015. © Photo Sébastien Calvet / Mediapart

The trial of 20 individuals accused of variously perpetrating or helping with the carrying out of the November 13th 2015 terrorist attacks in Paris is continuing, in proceedings that are expected to last nine months. As part of its regular coverage of the trial, Mediapart is publishing the first-hand reactions and reflections of seven victims of the massacres as they follow the court proceedings. Here Roman, aged 30, who escaped alive after terrorists attacked La Belle Équipe restaurant where he was dining with friends, gives his evidence to the court about the attacks and describes the events that preceded it. 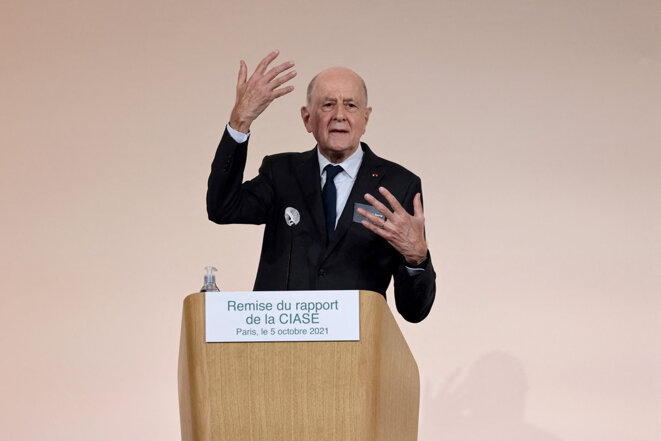 On Tuesday October 5th a report revealed the shocking scale of child sex abuse inside the French Catholic Church over many decades. The report's authors estimate that 330,000 minors have been the victims of sexual abuse within the church since 1950, a majority of them at the hands of ordained clergy. Since the report's publication the overall reaction from the political classes, both Left and Right, has seemed timid. Some politicians, however, are calling for the courts to intervene and for the church to undergo deep reform. Mathieu Dejean, Mathilde Goanec, Pauline Graulle and Ilyes Ramdani report. 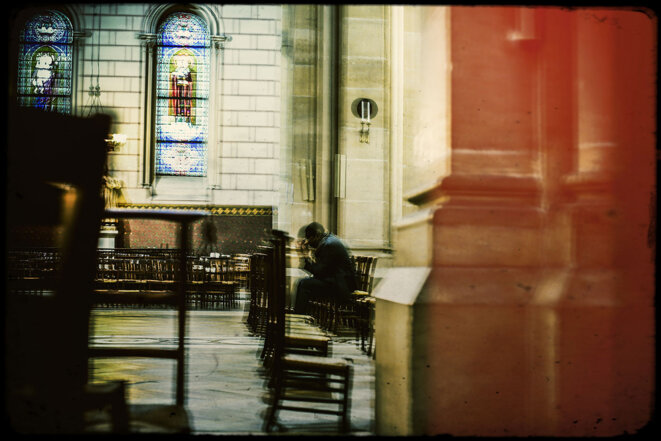 For months the French government has continually raised concerns about what it sees as the dangers of “Islamic separatism” in the country and has brought in legislation to tackle it. Yet when in the wake of a major report on child sex abuse in the French Catholic Church a senior bishop suggested that the secrets of the confessional were stronger than the “Republic's laws” there was at first a deafening silence from government ministers. This reluctance to comment came on top of the government's clear embarrassment at the publication of the sex abuse report itself, a document which produced shocking figures on the extent of the scandal in the church. Ellen Salvi reports. 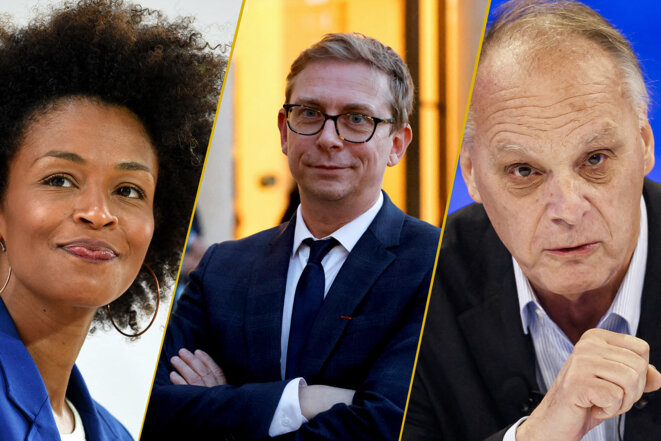 On September 29th 2021 the Élysée officially unveiled a new commission to help fight against conspiracy theories and disinformation. Officially called the 'Enlightenment in the digital age' commission, President Emmanuel Macron wants it to champion science, reason and truth and come up with new policy options in an era where social media in particular is awash with a bewildering array of views and theories. Critics, however, accuse the head of state of wanting to impose his own narrative ahead of next April's presidential election. Already the membership of the commission has been bitterly criticised, in particular its chair, social scientist Gérald Bronner. And after also coming under fire another member, Professor Guy Vallancien, a high-profile urologist, has just resigned from the body. Joseph Confavreux and Ellen Salvi report.

The growing evidence that agroecology could and should replace intensive farming

The post-war development in Europe of productivity-driven intensive farming, with its environmentally harmful use of synthetic pesticides, vast fields of monoculture, and industrial animal-rearing, could be feasibly replaced by large-scale organic farming, capable of feeding the continent’s populations under an agricultural umbrella system called agroecology. That is the conclusion of a large and growing body of international scientific research, and the subject of several recent studies published in France. Amélie Poinssot examines the evidence. 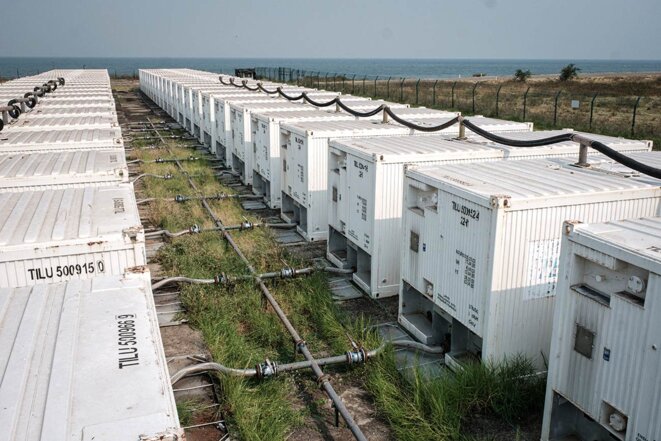 Crude oil containers on the shores of Lake Albert in the west of Uganda, January 24th 2020. © Photo Yasuyoshi Chiba / AFP

He has not spoken about it publicly. But behind the scenes the French head of state Emmanuel Macron has written to the president of Uganda supporting the role of French oil firm Total in developing an oilfield and a  lengthy new oil pipeline in the East African country. In the capital Kampala, meanwhile, the French embassy has  been wholeheartedly lobbying for the French multinational. Yet the projects are opposed by environmental and human rights groups who say they are not just bad for the climate but will also displace thousands of local people from their land. Mediapart's environment correspondent Jade Lindgaard reports. 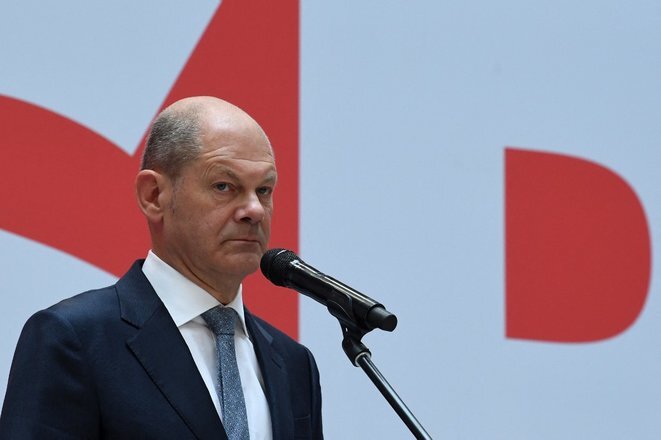 Germany’s social democrat SPD party came first in the country’s parliamentary elections on September 26th, garnering just more than a quarter of votes cast. It places the centre-left party in prime position to form a new coalition government, which would see Olaf Scholz, the party’s candidate for chancellor, succeed the outgoing Angela Merkel. But, writes Fabien Escalona in this analysis of the wider implications of the election, the knife-edge victory of the once moribund SPD is very much a relative one, and is far from auguring a resurgence of the social democrat movement in Europe, despite similarly fragile recent wins in Nordic countries. 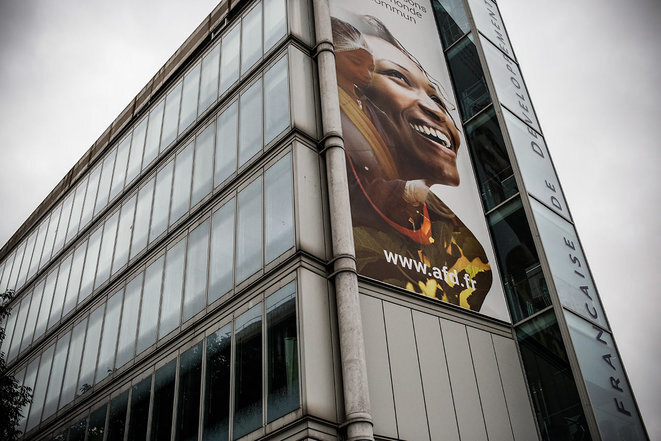 France’s foreign aid agency, the AFD, which provides financial support for developing countries, funds projects in Africa to the tune of billions of euros in contracts in which the principal beneficiaries are French companies, while the details of a number of its activities are not made public for reasons of banking secrecy. Justine Brabant and Anthony Fouchard summarize here the findings of a series of investigations into the AFD's practices by Mediapart in partnership with online newsroom Disclose.

Paris attacks trial: the first-hand accounts of the victims 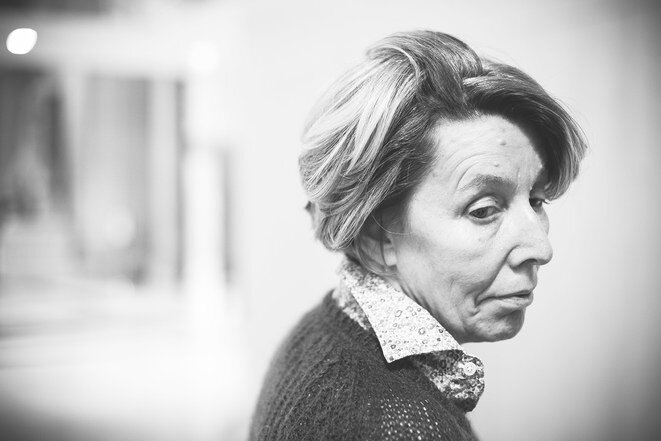 The trial of 20 individuals accused of variously perpetrating or helping with the perpetration of the November 13th 2015 terrorist attacks in Paris this week entered its third week, in what is just the beginning of a legal marathon that is expected to last nine months. As part of its regular coverage of the hearings, Mediapart is publishing the first-hand reactions and reflections of seven victims of the massacres as they follow the court proceedings. Here, Nadine Ribet-Reinhart, whose 26-year-old son was among 90 people massacred at the Bataclan concert hall, and Georges Salines, who lost his 28-year-old daughter in the same attack, write about their initial experiences of a trial that has been almost six years in the making. 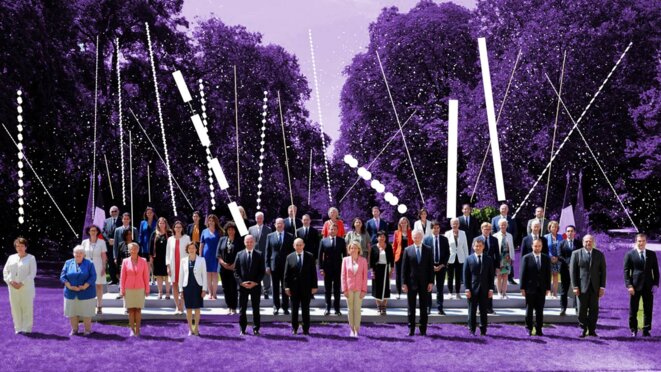 The mobile phones of five French government ministers were targeted by the Pegasus spyware sold to states worldwide by Israeli surveillance technology firm NSO Group, Mediapart can reveal. The presence of “markers” left by the spyware were discovered by an official French probe involving technical analyses of the devices. The development follows on revelations, first published in July, which found evidence that the surveillance tool was notably employed by NSO clients around the globe to target journalists, including two from Mediapart, politicians and regime opponents. Fabrice Arfi and Ellen Salvi report. 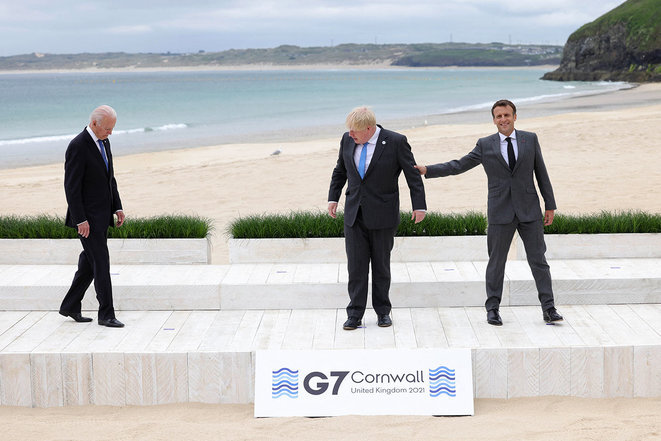 After a phone conversation on Wednesday, US President Joe Biden and his French counterpart Emmanuel Macron appeared to have at least partly defused tensions over the new military pact between Australia, the UK and the US which entailed the cancellation of Australia’s purchase of 12 French submarines worth 56 billion euros. In this op-ed article, Mediapart’s international affairs specialist François Bougon argues that the diplomatic crisis of recent days should prompt a re-think of France’s global role and an end to the notion of its grandeur and exceptionalism, a heritage handed down from Charles de Gaulle. 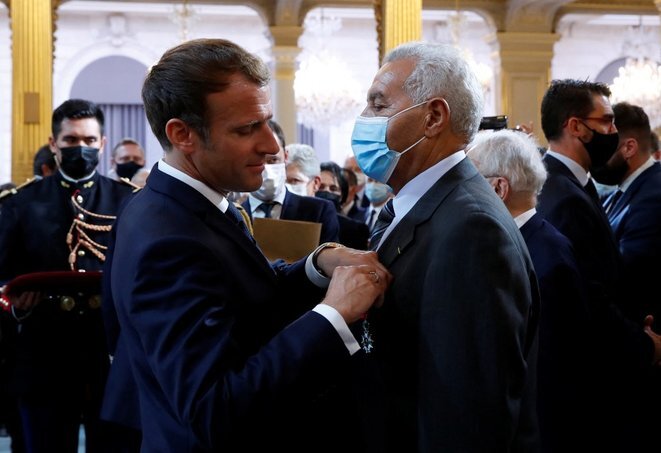 French President Emmanuel Macron has announced his government will soon present draft legislation to allow for the payment of compensation to the Harki community, in recognition of “the dereliction” of the French state’s duty towards them. The Harkis were the Algerian paramilitary who fought under the orders of the French army during the Algerian War of Independence. About 90,000 of the auxiliaries and family members fled to France to escape imprisonment and executions after Algeria gained independence in 1962. More than half of them were kept for decades in camps in dire conditions, abandoned by successive governments. Rachida El Azzouzi reports. 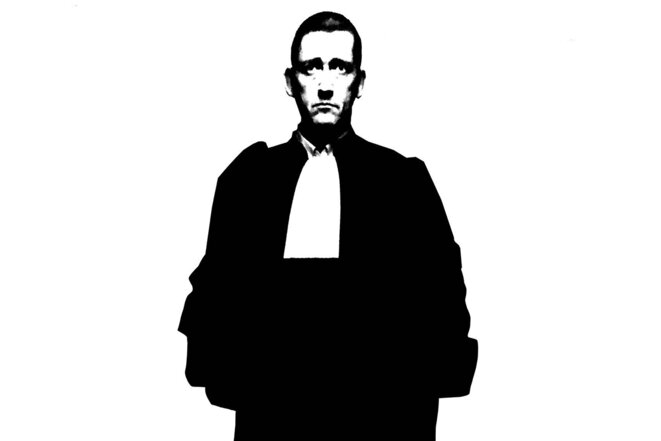 French lawyer Jean-Yves Moyart attracted tens of thousands of regular readers to a blog he ran, beginning in 2008, in which he detailed his experiences of the everyday functioning and failings of the justice system in France, the often severe treatment meted out to the socially modest, and the difficulties of his job. The runaway success of his blog led to the publication of extracts in a book released in 2011. Now, following his death from cancer earlier this year, a new selection of his writings appear in a book published this month, reviewed here by Mediapart’s legal affairs correspondent Michel Deléan.