Tibhirine monk murders and 'bitter' reports of a super-spy

In March 1996, seven French Cisterian Trappist monks were kidnapped from their monastery in Tibhirine, Algeria. Their heads were found two months later, on a nearby roadside, some hanging from trees in plastic bags. Their murders remain a mystery, despite initial official claims that Islamic extremists were responsible. An ongoing French judicial investigation is exploring the theory that they were mistakenly murdered by the Algerian army, and their bodies mutilated in an appalling cover-up. In this second report on the mystery, we reveal extracts from three secret French intelligence reports prepared by General Philippe Rondot, the 'super-spy' assigned to the case.

In March 1996, seven French Cisterian Trappist monks1 were kidnapped from their monastery in Tibhirine, Algeria. Their heads were found two months later, on a roadside in the same region, close to the town of Médéa, some hanging from trees in plastic bags. Their murders remain a mystery, despite initial official claims that Islamic extremists were responsible. An ongoing French judicial investigation is exploring the theory that they were mistakenly murdered by Algerian army helicopter gunships, during an attack on a desert camp of suspected Islamic extremists, and their bodies mutilated as part of an appalling cover-up.

Mediapart's report on the astonishing testimony of a French army general suggesting that both the Algerian and French authorities had disguised the blunder was presented in the first of this two-part report. Here, we reveal how French intelligence reports at the time indicated that the Algerian authorities were "slow" in dealing with the hostage taking and displayed a certain "tolerance" towards the Islamic extremist believed to be behind the kidnapping. 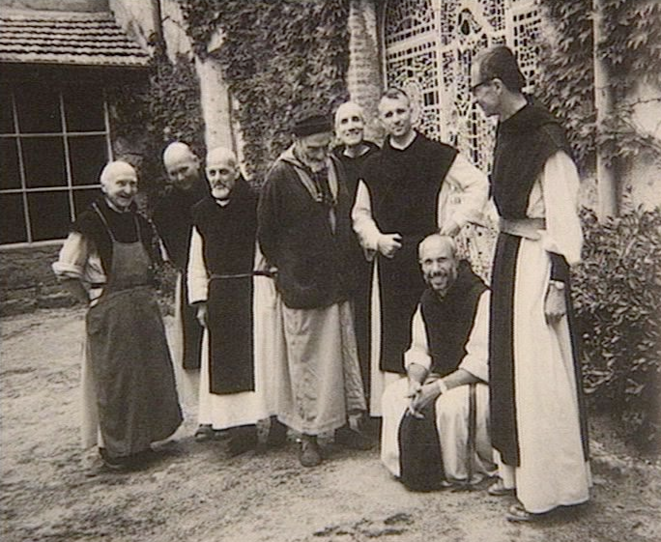 Monks of Tibhirine; victims included Father Christophe, 2nd. from right.
Uncovering the ambivalent role played by the Algerian secret services is central to the investigation led by Paris-based magistrate Marc Trévidic. The monks were kidnapped at the height of the conflict between the Algerian state and the Armed Islamic Group (GIA)2, and it was long held previously that the GIA was responsible for the killings.

Several reports of the French counter-espionage services, declassified at the request of Judge Trévidic, indicate that blame for the massacre may not lie with the GIA alone. Mediapart has consulted the documents, composed of three 'confidential defence' reports written by General Philippe Rondot, who was at the time assigned to the Direction de la surveillance du territoire (DST, now called the DCRI),3 the French secret service responsible for counter-espionage and internal security. As such, the general was on the front line during the kidnapping and the ensuing assassination of the Tibhirine Monks.

Now retired, General Rondot was heard as a witness on Monday September 27th, 2010, by Judge Trévidic. He was summoned to explain reports he made at the time of the events and which he himself qualified as "bitter musings". In these, he noted the "visibly slow progress" of the Algerian secret services in the management of the affair and their "relative tolerance" towards one of the main leaders of the GIA, Djamel Zitouni, to whom the taking and killing of the monks is officially attributed.

The seven monks were kidnapped from the Trappist monastary at Tibhirine, located 90 kilometres south of Algiers, in the Medea region, during the night of March 26th to 27th 1996. Their heads were found several weeks later, at the end of May, on the side of a road. Their bodies were never found.

Nearly 15 years after the events, no legally-proven truth has emerged from the thick fog surrounding the causes of the massacre. The theory that Islamic rebels are responsible is supported by Algiers and was upheld for years by the first French anti-terrorism magistrate to handle the case, Jean-Louis Bruguière. But this view is seriously flawed, for at least two reasons.

Firstly because, in July 2009, the former military attaché to the French Embassy in Algiers, General François Buchwalter, told investigating magistrates that he had information revealing that, after they were kidnapped, the monks were the unintended victims of an attack on a desert camp by the Algerian army. He was asked by French diplomats to keep his revelations to himself, he further stated.

The second reason is that many clues tend to show that two of the principal terrorists held responsible for the monks disappearance, Djamel Zitouni, a GIA Emir, and his deputy, Abderrazak El-Para, maintained ambiguous relations with the Algerian authorities. At best, the government showed them a degree of laissez-faire, at worse they were agents of the military apparatus, infiltrated into the heart of the GIA in order to manipulate it, no matter what the cost.

2: The FIS Islamic Salvation Front won the first round of Algerias legislative elections in Dec 1991. The army stepped in to prevent it winning the second ballot and the FIS was dissolved in January 1992. The GIA, Armed Islamic Group, arose at the time to support the FIS. Ten years of civil unrest ensued.

The tragedy is the subject of the French film 'Des hommes et des dieux', (English title: 'Of Gods & Men'), directed by Xavier Beauvois, starring Lambert Wilson and Michael Lonsdale. It centres on the intense and anguished soul-seraching imposed on the monks in the period running up to the kidnap, when they must decide whether they give in to threats of violence against the monastery and move away from their mission, or stay.