Two days before Christmas, an evening train from the Italian town of Ventimiglia, which lies close to the border with France, travelling west to the nearby French Riviera city of Nice hit a group of migrants following the rail lines towards France, killing an unidentified young man. The rest of the group fled before emergency services and the railway police arrived.

According to Italian daily La Repubblica, the victim was an Algerian aged 25. It was the fifth accident involving migrants on the line running between France and Ventimiglia since August 2016, but the first in which a migrant was killed. The train driver suffered from psychological trauma that led to him being signed off work.

The macabre series began last August 5th when a 27-year-old Sudanese man was seriously injured by a French train in the last tunnel on the Italian side of the border. He was taken by helicopter to San Martino hospital in Genoa, suffering from a head injury. The train driver said he saw three people on the rail lines as he approached the border post, and his train hit one of them. By the time emergency services arrived the two others had disappeared. 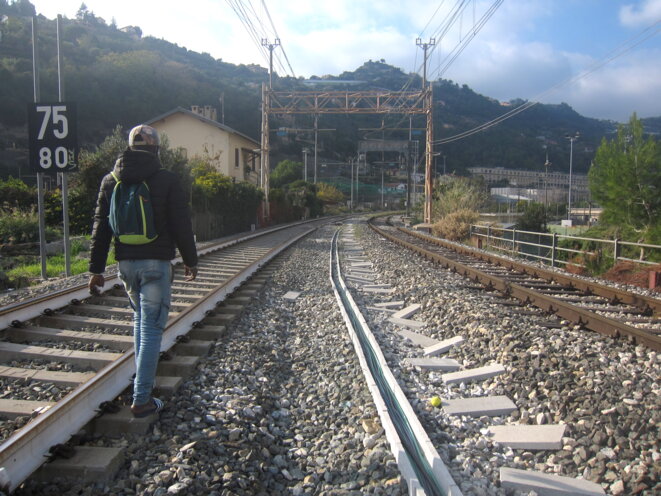 Chérif, 28, from Ivory Coast, following the railway line towards France out of the Italian border town of Ventimiglia. © LF

On the night of October 1st a French train driver felt an impact just before Menton-Garavan, the first station on the French side of the border coming from Italy. The driver searched the rails and saw several people running away, but did not find a body or anyone injured.

SNCF, the French railway operator, has a clearly laid-down procedure for accidents involving people on railway lines. The driver must stop, get down and inspect the rails, then alert the control centre, which halts rail traffic so that the police and emergency services can safely intervene.

The Ventimiglia-Nice line has become the bane of drivers, according to Cyrille Poggi, the CGT trade union representative for drivers in the region. "They are traumatised because there are a lot of corporal accidents because of the refugees in the tunnels," he said. "The line is winding, with unlit tunnels and poor visibility. A train needs 300 to 800 metres to stop. Metal wheels on metal rails, they brake very poorly. Often the accidents happen at night. The refugees pass through in a group and we do not find the bodies."

Under SNCF rules another driver has to take over from the first driver in the case of an accident, which Poggi said has consequences on productivity for the rail operator. "That is why management wants to re-introduce the whistle in the tunnels," he claimed.

A ticket inspector said drivers had adopted the habit of hooting in the tunnels on their own initiative, "because this has been going on for years". There was always the risk of hitting people, said the inspector, who, like most of those SNCF employees interviewed for this report, asked for his name to be withheld. "The drivers above all are under stress when they enter the tunnels. On each journey we see people, either very early or at the end of the day."

The phenomenon goes back to the Arab Spring of 2011, which turned Ventimiglia into a gateway into France for thousands of Tunisians. However, another driver, who has worked for the SNCF since 1998, speaking on condition his name was withheld, recalled having always heard of accidents with migrants in the area. "At the time we called them illegals, but today it has grown," he said.

"It’s very dangerous," the driver added. "They walk in the middle of the rails on the sleepers because it's easier than on the edges where it slopes and there are stones. They are not used to the speed of our trains. And they also do not know, just like many French people, that you do not hear a train coming, and that it doesn’t stop in a few minutes."

Two railway lines link Ventimiglia to France, one via the coast through the small town of Menton at the French border and on to Nice, and the other through the rugged coastal lower Alps and Roya Valley. France reinstated border controls here in November 2015 following the Paris terrorist attacks, and since then SNCF employees on both lines see migrants every day, walking along the rails to avoid police checks on trains. "Before, lots of migrants came through Menton, Sospel and Tende,” said a ticket office clerk. “Now we don't see them any more at ticket offices, they walk along the rails."

It happens that some get lost and find themselves near stations. "When we go to pick up the carriages for the first train to Breil-sur-Roya, we sometimes trip over someone who slept outdoors near the carriages," said another driver who asked not to be named. "It is getting really cold, there are going to be dramatic incidents."

One evening late last September, an SNCF employee found a young, "frightened and hungry" migrant on the platform at Breil-sur-Roya, a town in the coastal Alps near the Italian border. He let the "kid" stay overnight in the local SNCF depot then hid him in the driver's cabin on the first train for Nice.

Migrants trying to cross without being checked also hide under seats or in the trailing locomotive when the driver has forgotten to close the window. "On the line coming from Breil-sur-Roya you feel the distress. Some of them are 14 or 15," said the ticket inspector. "They hide in dangerous areas – the electric control panels, the motor blowers, the equipment cupboards. It's no longer manageable."

On December 21st, just two days before the fatal accident, two young Nigerian migrants hiding on the train for Nice were rescued by Italian rail police before the train left Ventimiglia. They heard faint knocking coming from an electrical cabinet, according to Italian press reports.

Inside the tiny space were two young men, one of whom had fainted, while the other was exhausted and very weak. A people smuggler had charged them 150 euros to get to France and had locked them in the cabinet. "All the smugglers have the kind of keys that open cabins and cabinets," an SNCF employee said.

Several SNCF employees are refusing to take part in anti-migrant actions and denounce an ambiguous attitude on the part of SNCF. "We are fighting to stop the SNCF collaborating with the witch hunt against migrants," said Najim Abdelkader, secretary of the CGT rail union for Nice. "Unfortunately, the SNCF has given the prefecture [editor's note: police services] access to premises at Menton-Garavan to turn back refugees. And in the trains, CRS [crowd-control police] search technical equipment cabinets and toilets, which means that the SNCF has given them our keys."

Contacted by Mediapart, the SNCF did not respond to our request for an interview on the issues raised in this report. 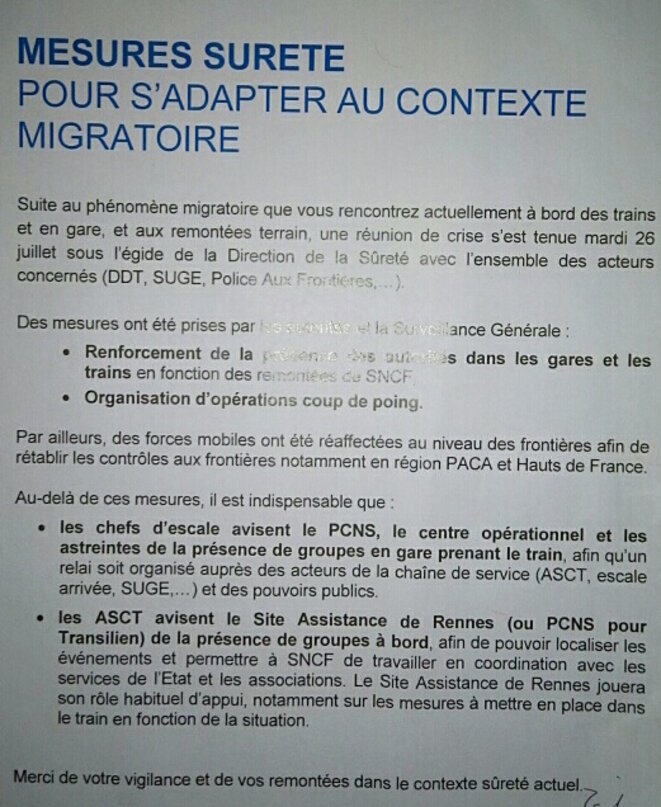 The SNCF memorandum 'Security measures to adapt to the migration context'. © DR

Mediapart obtained an undated SNCF internal memorandum (see above) entitled "Security measures to adapt to the migration context" which is circulated in the Provence-Alpes-Côte d'Azur  (PACA) region which includes the border area in question. It calls on station managers and ticket inspectors to report the presence of "groups in stations catching the train", or “onboard”, to the rail operator's National Security Command Post (PCNS) "to be able to localise events and allow the SNCF to work in coordination with public services and associations".

The memorandum also says that a crisis meeting was held on the issue on July 26th between the SNCF's security division, the department of the environment ministry responsible for local development, the railway police and the border police. It decided to "increase the presence of the authorities in stations and on trains in relation to requests from SNCF", and the "organisation of lightning operations". The approach goes beyond the government-owned rail operator's main mission, outlined in a law of August 4th 2014, as contributing to "a railway public service and to national solidarity as well as to the development of rail transport, within a context of sustainable development".

“We’re asked to indicate every group of migrants, that’s informing,” said a ticket inspector assigned to the PACA region, who asked for his name to be withheld. According to French law, it is only in a case of ticket fraud that an inspector can ask for an ID document. If the person who has committed the fraud has no proof of identity, inspectors can inform a police officer and prevent the person from leaving until the officer has arrived. Many of the migrants arriving from Italy have tickets, and a number of ticket inspectors say that they have no reason therefore to ask them for ID, and even less reason to inform the National Security Command Post of their presence. “We don’t use racial profiling,” said union official Najim Abdelkader. “It’s not a case of ‘ah, there are two black people, we’re going to ask for their tickets’. It’s when we carry out a check of all the train that we might eventually come across them.”