The Roma who stop roaming: integration or marginalisation?

September 30, 2010 By Elodie Berthaud
In contrast to the controversial French government policy of organising mass expulsions of Roma, local authorities in the Greater Paris Region have set up six social reinsertion camps, tactfully called 'villages', aimed at integrating them into more stable social conditions. But do these fenced and guarded sites offer a real solution - or are they misguided projects that further isolate an already marginalised community?
This article is open access. Information protects us. I subscribe

The rue de la Montagne-Pierreuse is a rough, potholed street that leads out of a vast industrial estate in Haut-Montreuil, a district in the suburb of Montreuil, east of Paris. It eventually reaches a fenced-off plot of land where 60 caravans are parked in perfect lines.

This concrete-covered site is the latest and largest of the reinsertion camps for Roma established around the Greater Paris Region (Ile-de-France). It is home to 185 people, including 70 children, all of them Romanian. 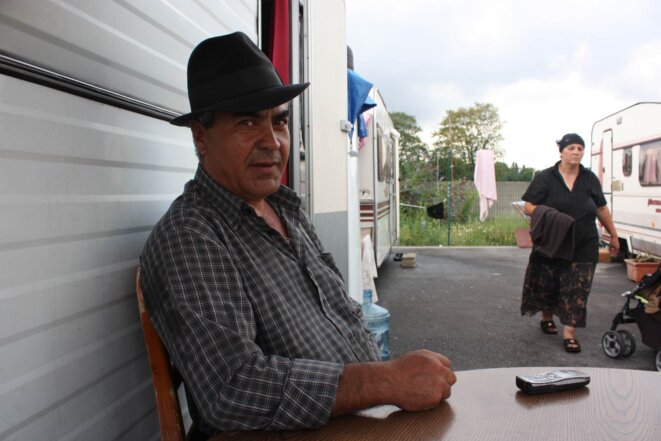 Private guards check all those who enter, 24 hours a day, seven days a week. The Roma who live here can come and go as they please. But outsiders, who are asked to present identity papers, can only enter during visiting hours; 3pm to 6pm on Tuesdays and Thursdays only.

The families are taking part in a pilot project, set-up by the Montreuil town hall and the administration of the local Seine-Saint-Denis département (county), to provide the Roma with emergency housing and social assistance. When they arrived in January, all of them had to sign a contract under which they agreed to send their children to school, to learn the French language, to seek employment and to adhere to the rules and regulations of the site. In exchange, they were provided with a caravan, loaned by the Abbé-Pierre foundation, an independent charitable organisation active in alleviating the conditions of those living in poverty.

"What we are concerned with is absorbing the district's shanty town populations, to stabilize and protect them so that they don't remain constantly prone to expulsion," says Fabien Charbuillet, assistant to Dominique Voynet, mayor of Montreuil, and veteran leading figure of the opposition Green party.

There are five other rehabilitation sites in the suburbs around Paris, in Aubervilliers (the first to open, in 2006), Montreuil, Bagnolet, Saint-Denis and Saint-Ouen (see map). As in Montreuil, they are all conceived as a half-way point between the shanty town and traditional accommodation. Similar projects are under consideration in the cities of Lille, Marseille and Lyon. "We think that the problem of housing the Roma population would be resolved if we created another 20 villages in the Ile-de-France," comments Florence Haye, deputy to the mayor of Saint-Denis, another suburb north of the capital. But while local politicians in the suburbs are largely united in believing the villages serve a useful purpose, social workers are among those who have questioned their ultimate results.

Firstly, it's the principle of selection that upsets people. In Saint-Denis, 21 families (a total of 90 people) were chosen to enter the reinsertion 'village', out of a total of 600 applicants. The selection criteria were set by the local authority: police records, the head of the family's job back in Romania, their means of existence in France, whether the children have been to school, number of young children. Social workers judged the ambitions and motivations of the applicants to filter the demand.

And yet this pilot project was originally offered as a solution for the Roma of the rue Campra, whose large shanty town was dismantled in 2007 after a fatal fire. The result was that at the end of 2007, the 21 chosen families moved into caravans parked below the Fort de l'Est, in the run-down neighbourhood of Francs-Moisins, while the others were either deported back to Romania or returned to shanty towns or squats. A clean break was made and has since separated the people judged to be apt for reinsertion and the others, the majority, who will not be given that opportunity.

Even the chosen ones are still not home and dry. The contracts can be torn up and the families asked to leave. As such, these are trial residents.

Only Montreuil has chosen not to use selection. It housed all the Roma who had lived in the old squat on the rue Dombasle, which was also damaged by fire in 2008. "The MOUS [a team that groups together the State, local authorities and council housing administrators on projects for housing the most underprivileged] that Montreuil has set up looks after a total of 350 Roma," explains Fabien Charbuillet. "It is the largest in the region. The town hall believes it is facing up to its responsibilities in devoting a million euros a year to make it work. It can't do more than this."

But the expulsions of Roma during the summer have revealed the other Roma of Montreuil - those who live in shanty towns or squat in slums, of whom there are estimated to be 300 living in the district.