Police officers from France's anti-corruption squad, the OCLCIFF, have produced a preliminary and damning report into the claims that the Libyan regime under Muammar Gaddafi funded the 2007 presidential election campaign of Nicolas Sarkozy. It raises questions about the role of Éric Woerth who at the time was treasurer of Sarkozy's campaign, later became a minister and is now president of the finance committee at the National Assembly. Meanwhile judges have ordered the seizure of properties belonging to Sarkozy's former chief-of-staff and right-hand man, Claude Guéant. Fabrice Arfi and Karl Laske report.

The police investigators were asked by investigating magistrate Serge Tournaire to substantiate - or knock down - the theory that dirty money was circulating between Tripoli and Paris at the time of the 2007 election campaign, which saw Sarkozy elected as president. Their report has chapter headings which speak for themselves: “The materialisation of the suspicions of Libyan funding”, “Ziad Takieddine's briefcases[editor's note, the man said to have acted as the go-between between Libya and Sarkozy's team], “Claude Guéant's cash [editor's note, Sarkozy's former chief of staff]”, “The lack of honesty in the campaign accounts”, “The extent of cash circulating on the edges of the campaign”... 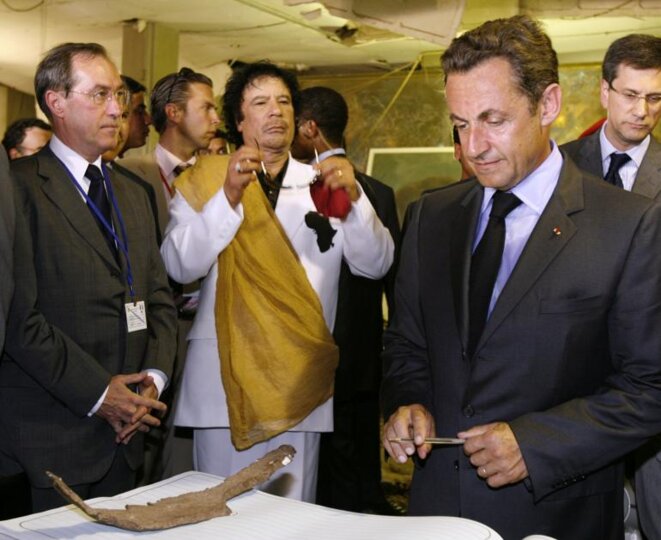 Claude Guéant, Muammar Gaddafi and Nicolas Sarkozy in Tripoli in 2007. © Reuters
Apart from comparing and analysing the many witness statements which have, during three years of investigation, corroborated the idea of a Franco-Libyan corruption scandal dating from 2006, the investigators are today starting to piece together several material elements that will be familiar to readers of Mediapart. They have also added new elements which confirm or even in some respects accentuate Mediapart's past revelations.

Among the familiar elements are the notebooks from the former Libyan prime minister and oil minister Shukri Ghanem who in April 2007 – four years before the war in Libya – recorded payments totalling several million euros from the Gaddafi regime to the Sarkozy team. Ghanem was found drowned in the River Danube in Vienna in 2012, between the two rounds of the French presidential campaign. Another is the evidence of the former Libyan spy chief Abdullah al-Senussi before the International Criminal Court, in which he admitted that he had personally sent five million euros in cash to Sarkozy and Guéant using Ziad Takieddine as the bagman.

Takieddine himself has given detailed evidence on the delivery of these suitcases of cash to the Ministry of the Interior in Paris on three occasions at the end of 2006 and start of 2007: two were handed over to Claude Guéant and one to the then-interior minister Nicolas Sarkozy. In their report the police investigators point out in relation to this: “A list summarising Mr Takieddine's trips to Libya featuring in another legal case was obtained. Some voyages of the person concerned were indeed noted at the dates of the transportation of the cash as mentioned.” Since his admission Ziad Takieddine has been placed under formal investigation, which is one stop short of charges being brought, in relation to these events.

The police also write of something which was unknown until now, namely a note from the French domestic intelligence agency the DCRI – now the DGSI. This note states: “...a Service source indicated [in March 2011] that the Libyan authorities were said to be in possession of a video recording proving that the sum of 20 million euros was sent to the candidate Nicolas Sarkozy by the Guide's entourage [editor's note, a reference to Gaddafi's unofficial title of 'Guide of the Revolution'], and this was in the context of the preparation for the 2007 French presidential campaign”.

It is relevant to note that a Libyan called Mohamed Albichari, a prominent opponent of Gaddafi, had told both the domestic and external French intelligence services that he could put them on the trail of these secret Gaddafi recordings. He went as far as getting them to listen to authenticated extracts before he died suddenly in Tunis in April 2012 from a diabetic crisis.

Another person who has been placed under investigation in relation to the case is Claude Guéant. The director of Sarkozy's 2007 election campaign, who then became his chief of staff at the Elysée before being appointed minister of the interior, Guéant – who like Sarkozy strongly denies any wrongdoing - appears to be a pivotal figure in the affair. 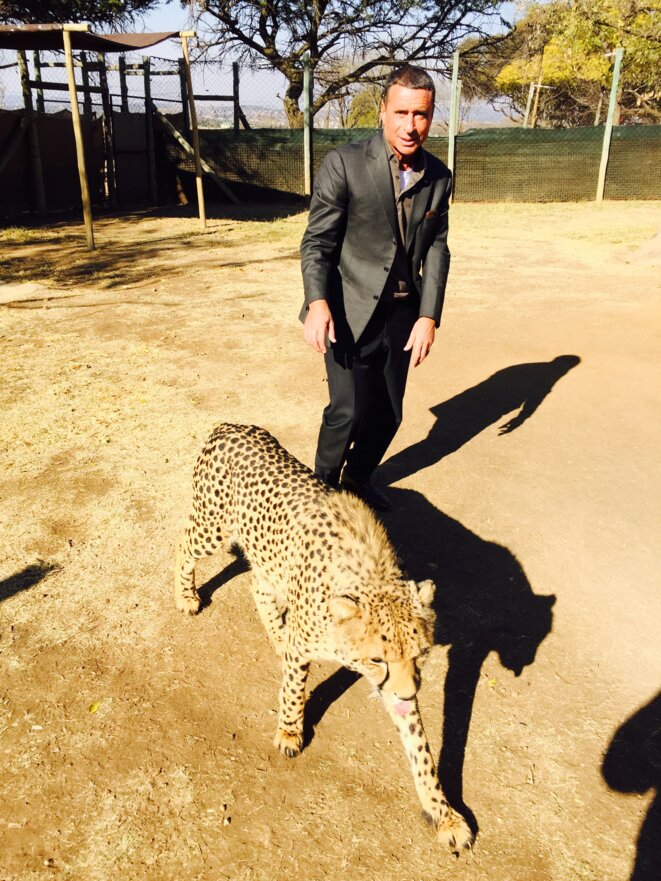 Alexandre Djouhri, the middleman at the heart of the Libyan affair. © DR/Mediapart
Already Guéant faces potential proceedings over the receipt of 500,000 euros in March 2008. According to the judicial investigation the person hidden behind this transfer was the intermediary Alexandre Djouhri, who handled bank accounts for Gaddafi's former chief of staff Bashir Saleh.

Step by step the police have also being able to piece together what they call the “unrestrained use of cash” by Claude Guéant. The police report notes that Sarkozy's former right-hand man withdrew just 800 euros from his bank account between May 2003 and the end of 2012 – in other words, for nearly a decade.

As well as the 110,000 euros in investigation expenses that he was convicted of having misappropriated while working for Sarkozy at the Ministry of the Interior from 2002 to 2004, according to the police Claude Guéant is today also suspected of having handled at least 200,000 euros in cash whose origin cannot be explained. And according to the police that does not even take into account all the living expenses that Guéant also paid for in cash.

In 2007 Guéant rented a strongroom at the Opéra branch of the BNP bank in central Paris, which he visited discreetly seven times between March 23rd and July 19th 2007. Questioned by the police Guéant insisted that he had rented this strongroom, which was big enough for a man to enter fully upright, in order to put Nicolas Sarkozy's speeches.

A number of Nicolas Sarkozy's campaign team have been questioned over the Libyan affair. They have either kept silent in the face of Guéant's extraordinary declarations, or raised clear doubts over his alibi. 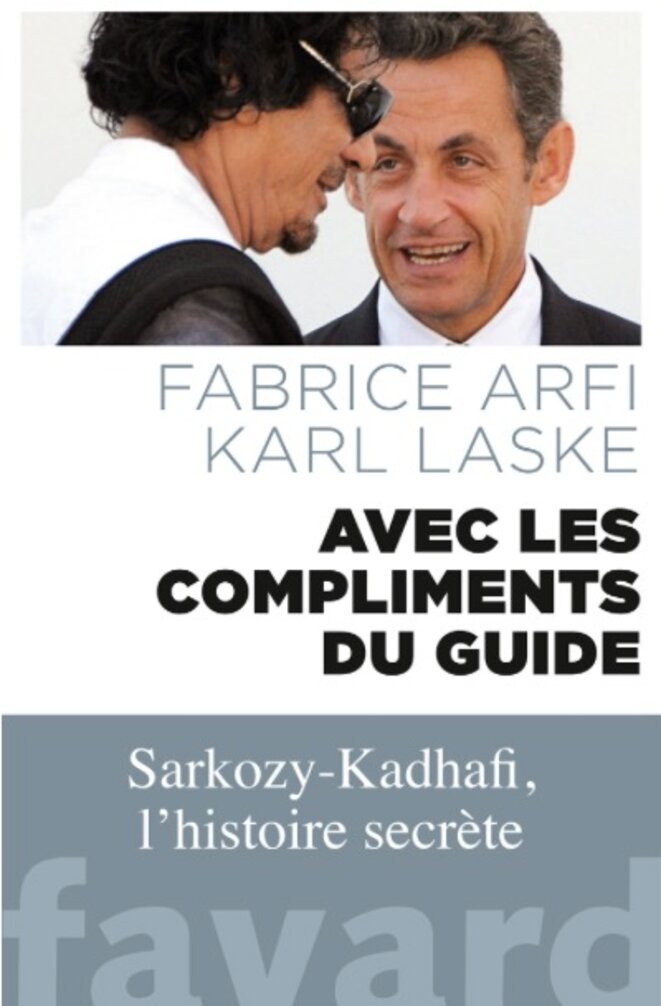 The two authors of this article have just written Avec les compliments du Guide, ('With the Compliments of the Guide') published by Fayard, an investigation into the Libyan funding affair.
}