The protesters who have occupied the proposed site for a new airport at Notre-Dame-des-Landes near Nantes in west France have grabbed media attention in recent years. Less well-known are the environmental activists who have set up a similar camp in an ancient forest on the other side of the country in a bid to stop the development of a new Center Parcs holiday centre. As Jade Lindgaard reports, unlike their anti-airport counterparts, the protesters opposing the Center Parcs project are from being universally popular with locals.

To get there you have to clamber over bits of wood erected as a defensive mound. Lying between two banks a series of steps enable you to gain access to the habitable barricade that serves as a welcome area. It bears the name 'Saboté' ('Botched' in English) and is the gateway to a camp of protesters at Chambarans, a forest situated around sixty kilometres from Grenoble in eastern France.

Protesters have occupied the site in this ancient communal woodland since November 2014 in a bid to block plans to develop a Center Parcs holiday centre here. In July 2015 opponents scored a victory: an administrative court overturned the local state prefect's decree authorising the destruction of the wetland area which extends across part of the 200-hectare site where the group Pierres et Vacances wants to build cottages and a swimming pool under the distinctive Center Parcs dome. The holiday group has since appealed against the judgement. Locally, those for and against the Center Parcs project eye each other with mistrust as they await the next judicial round. Some local people have expressed considerable hatred towards the activists who now live on their doorstep. 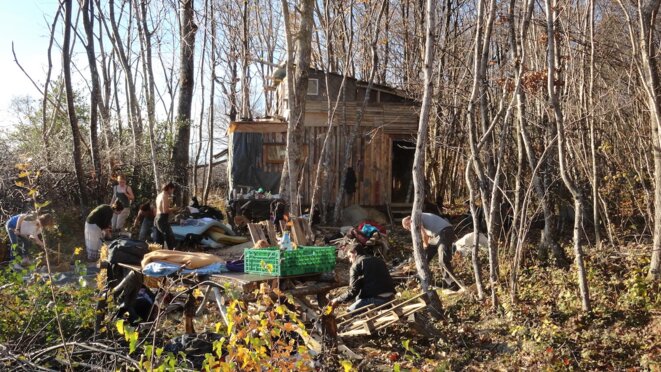 One of the homes used by protesters in the Chambarans forest; this one is called 'Pallet Palace'.
The occupation area is known in the protest jargon as a ZAD, and its occupants as 'Zadists'. Officially ZAD stands for zone d'aménagement différé or 'future development zone', but it has been adapted by green protesters to mean zone à défendre or an 'area to defend'. On the left of the ZAD at Chambarans is a vegetable garden that has returned to its natural state under a partly-torn polytunnel surrounded by trenches filled to the brim with water. To the right are hundreds of tree trunks piled on top of each other, the result of the wood clearance work that was brought to a halt by the opponents.

A little further into the zone, the former portable cabins used by the site workmen are now open to the elements. They are covered in slogans and graffiti plus a sign with the word 'ACAB' written in perfectly rectangular black letters. This is an abbreviation of the old anarchist slogan in English 'All cops are bastards', and serves as a sign for the site's ACAB café which was still active last summer. Inside is a sofa, empty cupboards and a broken bike. The hessian roof is falling in. The scenes represents the ruins of a collective life in the open air. “Let's live everywhere,” proclaims one banner. “Because we crap on relations based on domination and norms make us sick. Here there is no sexism and homophobia.” 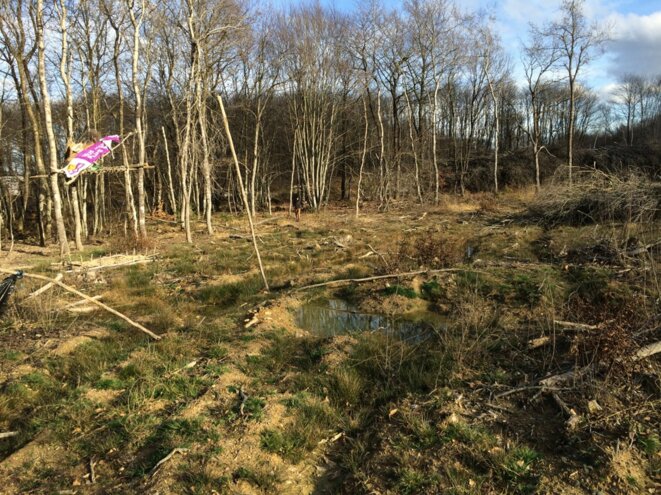 A part of the Chambarans forest that has already been cleared; it has now been occupied by opponents to the Center Parcs scheme. (JL).
Some men and women continue to live in the Avenières wood, at this part of the forest is called, but now under cover because of the winter cold and wet and in small groups. There are far fewer of them than at the best-known 'ZAD' at Notre-Dame-des-Landes on the other side of France, where protesters are campaigning against a new airport. Yet whether their living areas are permanent or temporary, they have been given humorous and grandiose names such as 'Pallet palace'. Among them are a hut on stilts, a kitchen-living room-sleeping area that looks like a witch's house, platforms high in the trees to watch out for hostile visitors and a watchtower on the south side adorned with the words: 'Welcome to stateless people'. Elsewhere one reads: “We will always be right to defend the forests.” Here the woods are not just décor. Yes, they are the object of the current struggle but they are also the physical setting where those who seek a utopia try their hardest to make it work. 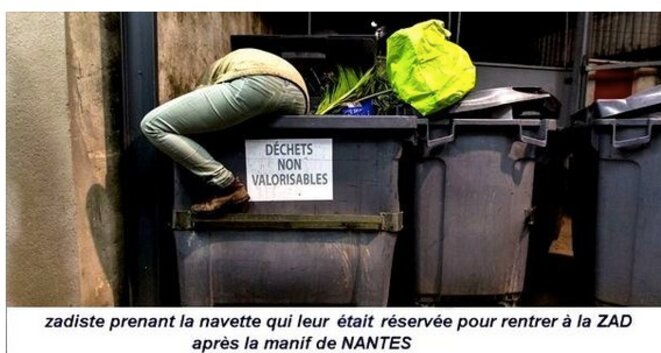 A photomontage posted by supporters of the project on their Facebook page. The sign on the bin refers to 'rubbish that cannot be reused'.
The simplest way to cross the 'ZAD' is to follow the path of the track between the trees that goes dead straight, as if drawn with a ruler. It was created before the courts stopped work on the site. “The first time I saw it I said to myself it's like a motorway,” recalls a local resident, who is also opposed to the Center Parcs project.

Another local opponent notes: “The Center Parcs project raises lots of environmental problems. But it's also a issue for society: the encroaching commercialisation of the land. Where I used to go gathering mushrooms I run the risk of finding somewhere you have to pay to get in.” But like everyone else interviewed by Mediapart, whether for or against the project, no one wanted to be named, photographed or identified in anyway. Eighteen months after the first clashes between protesters and supporters over the scheme, no one wants to appear openly in the media.

Evidence of the local hostility leaps out at you at the ZAD. Someone has daubed the words 'Bolshies out' on the front of the southern barricade. Next to it someone else has drawn a golden heart, apparently as a form of antidote to the slogan. In the northern barricade, Saboté, an unknown person has cut width ways across some wooden pillars while no one was on watch.

The Facebook page of supporters of the holiday centre project has meanwhile become a forum for those who want to give vent to their hatred of the protesters. “I'm going to have a Zadist”, “Don't forget to protect yourselves with gloves and a mask as they are so mangy that there's a risk of diseases (such as plague, leprosy, scabies)”, “These filthy bastards must be exterminated”, “Just one thing I want at this moment: to go and butcher these fucking Zadists” and “Today I went past Roybon [editor's note, the name of the village parish or commune where the centre is planned] in a lorry but unfortunately not a single person crossed in front of me” are just some examples of what people have written. Others examples include “When will these parasites be evicted” while another asks “So, are we getting rid of them?” To which came the warlike response: “Our dear government only has to send in the army and all these wankers can be made to do hard labour.”

The level of violence of these verbal attacks is inversely proportionate to the size of the village of Roybon itself, which has just over 1,200 inhabitants. Banners with the words “Yes to Center Parcs” can be seen in the streets. People who support the project say it will create jobs and make the area better known. “They say that there's nothing here, that it's good to build things there - they're not attached to this forest,” says one opponent sadly.

A whole raft of local organisations and local branches of national organisations back the Center Parcs project, including the employers federation MEDEF, the Chamber of Industry and Commerce, the CGPME which represents smaller businesses, the CFDT union, the Christian workers' association the CFTC, the artisans' body UPA and the building federation the FBTP. They say that “this project is a unique opportunity for our [local] families who hope for a job, for our artisans who are looking for orders, for our [local] small and medium-sized businesses who have trouble making ends meet at the end of the month, for the dynamism of our area”. As with the supporters of the airport at Notre-Dame-des-Landes, they also see the project's go-ahead as a mater of principle. “Unless we're mistaken we are still in a country under the rule of law, and in a democratic country, where it's the view of the majority that must be heard,” they argued in a statement.