'We underestimated their power': Greek government insider lifts the lid on five months of 'humiliation' and 'blackmail'

On the 'maze of pseudo-negotiations', and the 'character assassination' of Varoufakis:

All the loans we have received, 240 to 250 billion euros, go for the servicing of the debt, back to the creditors. The first bailout was a bailout of the banks to the state. We didn't get any finance in order to pay them, we couldn't borrow short-term and we couldn't facilitate the liquidity of the economy because the ECB was putting one restriction after the other. So you have the liquidity problem and at the same time you have a financing problem. The two of them are connected in what I called from the beginning ‘credit asphyxiation’.

In the middle of March, finally, some Brussels sources said to the correspondents in Brussels that "yes, the institutions – the EBD, IMF, European Commission, are using credit asphyxiation in order to force the government to comply, accept the reforms, do it quickly, et cetera.". For me it was an admission that they were using the worst king of economic blackmail to the country. The worst kind of economic sanctions. If we [take] Iraq, and instead of doing a trade embargo they said "we cut all your assets, your banks have no money, no dollars, no anything, you have to rely on printing money, you're going to have an exposure". But they didn't do that in Iraq. It was a trade embargo, not a financial or credit asphyxiation. Because at any moment, gradually, there comes a time you die. You can't survive this much longer. Varoufakis has even called it "waterboarding", financial and fiscal waterboarding.

The assumption is that by pulling the plug, they pull the plug of the whole world. This has not happened and I am sorry. I was following how the euro was going, how it was reacting, because they did experiments. [German finance minister Wolfgang] Schäuble and Berlin are clever, they enforce artificial crises into the negotiations now and then: "Oh, the Greeks are not cooperating, they haven't understood what to do, they are not giving any figures". And instead of falling, the euro is going up. The same with European stock exchanges.

[…] Only in the last week they [the Greek government] realised it, and Varoufakis made a couple of statements, that we go to the European Court of Justice. When you reach the explosion of the crisis, legal arguments are not valid anymore, they can't help. 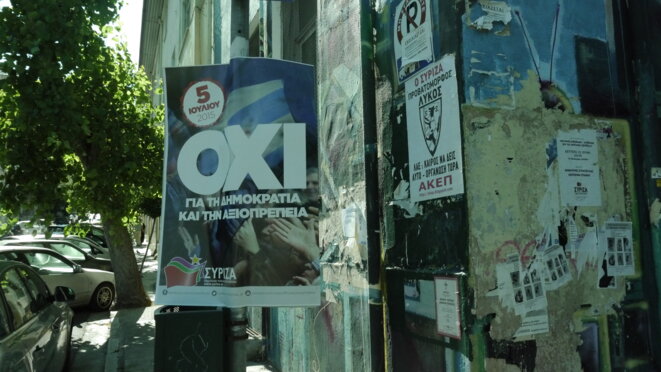 […] At every point they were trying to undermine the prestige that the Greek [Syriza] government had won during the first months of negotiation. At the time people said "a new hope for Europe... a new hope for Germany, Spain... the Greeks are giving us the lead”. If [the Institutions] said from the beginning "It’s finished, we don't agree, no more negotiations" - which they said indirectly, for example [Dutch finance minister and Eurogroup president Jeroen] Dijsselbloem - then it'd be clear and we would be in a clash: "We are elected, have prestige and authority. You are wrong etc". But they didn't do that […] They created a maze of pseudo-negotiations, time wasted, and it was on their side. All the time they were carrying negative propaganda against Varoufakis. Character assassination, and Varoufakis keeps saying that. But what did he expect?

So here we are, having lost all the economic ground of negotiating in real terms, of finding a new agreement, and also lost the credibility to force them to negotiate with us. The government, Tsipras, says that when they presented us the ultimatum "take it or leave it" [it was] with worst measures than they had presented to the previous government, the right-wing government […] the ECB tells the parliament "You take the measures or on Monday you have no banks". But our banks were alright. So instead what [the Greek government] did, and it was correct as a move, they went for the referendum, which means that they would have to do what they did in Cyprus for a week. They believed the situation would bring them closer to a deal. They didn't want a crisis.

But they don't have enough of a global or a European crisis, or a collapse. Yes the stock exchanges fall, yes there are fluctuations, the pound is rising. But, in the end, the Europeans are not forced to come closer.

[…] Varoufakis and Tsipras say that in case of a "No" [vote in the July 5th referendum], our bargaining position is strengthened. That's why they say "No", and not to an agreement that is not on the table anymore. "No" to any kind of agreement that doesn't deal with the debt restructuring or fiscal adjustment. The amount that is left for [the European institutions) to pay, 17 billion euros - plus another 16 or 20 billion from the IMF - are lost. The programme is finished and you need a new agreement. Basically what you do is beg the Europeans for an emergency funding through the ECB. But they say that to do that they have to go back to parliaments et cetera. But you need recapitalization in order to re-enter a process of economic functioning that would allow for dealing with a new programme.