The sale to India by France of 36 Dassault Rafale jet fighters for close to 8 billion euros has become the centre of corruption allegations levelled against Indian Prime Minister Narendra Modi and his close friend, Indian businessman Anil Ambani, chairman of the Reliance Group which was handed the role of local industrial partner of Dassault to build parts for the jets despite no aeronautical expertise. The claim that Ambani was given the joint venture contract as a favour by Modi to save his struggling business is the subject of a complaint lodged this month with India’s Central Bureau of Investigation. Now Mediapart has obtained a Dassault company document in which a senior executive is quoted as saying the group accepted to work with Reliance as an “imperative and obligatory” condition for securing the fighter contract. Karl Laske and Antton Rouget report.

On October 27th 2017, Indian businessman Anil Ambani, chairman of the Reliance Group conglomerate who is close to India’s prime minister Narendra Modi, warmly embraced French defence minister Florence Parly who had arrived in the central Indian city of Nagpur for the inauguration of a site destined to manufacture parts for 36 French-built Rafale fighter jets Paris had sold to New Delhi in a deal signed in 2016 worth 8 billion euros.

Accompanying Parly to the site in central India was Éric Trappier, CEO of Dassault Aviation, manufacturer of the Rafale.

The Nagpur site, which is also to assemble Dassault’s Falcon business jets, is a joint venture between the French aerospace group and Reliance, which was handed the role as the Indian industrial partner in the Rafale deal – the result of what is called an “offset” agreement to benefit the local economy. Unveiling a ceremonial foundation stone, set on a piece of turf under a marquee, the French defence minister hailed the ‘Dassault Reliance Aerospace Limited’ joint venture as being “an example of mutually beneficial technological partnership”.

But according to an internal Dassault document obtained by Mediapart, a senior executive of the French group told staff representatives that the joint venture with Reliance was agreed as a “compensation” in the Rafale deal and that it was both “imperative and obligatory” for Dassault in securing the fighter contract.

Meanwhile, the inauguration of the new plant close to Nagpur has since proved something of a mirage, for the site, initially due to begin activity this year, remains largely unbuilt. There is just one construction, which resembles a warehouse, and a piece of land under development, as shown in the photo below taken today, October 10th, by a journalist commissioned by Mediapart. It was in August 2015, and with the help of subsidies from the surrounding state of Maharashtra, that Reliance bought 119 hectares of land close to Nagpur’s Mihan airport for a sum equivalent to 7.5 million euros. 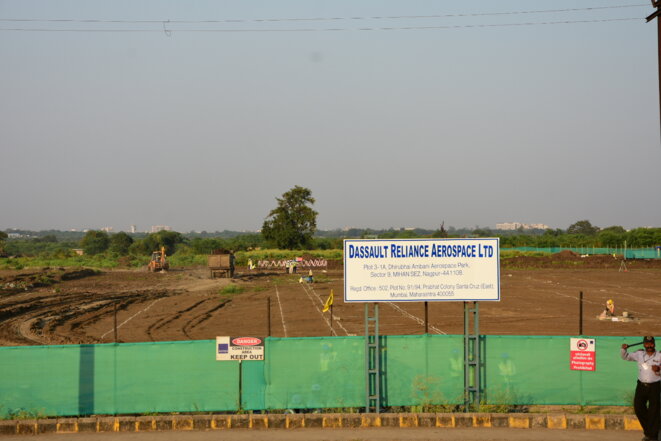 This month a detailed complaint alleging corruption in the joint venture deal was sent to the director of India’s Central Bureau of Investigation by Arun Shourie, a prominent economist and former minister, together with lawyer and anti-corruption activist Prashant Bhushan and former minister Yashwant Sinha. In their complaint, presented on October 4th, they accuse Prime Minister Narendra Modi of “abuse of authority” and of carrying out his public duties “dishonestly and improperly”, and “his long-time friend and close associate”, Reliance chairman Anil Ambani, of receiving “undue advantage” for his group which they described as being on “the point of insolvency” before the signing of the Rafale deal. They also accuse former Indian defence minister Manohar Parrikar and Dassault and its boss CEO Éric Trappier of “abetting” the alleged offences detailed in their document.

One lighter comment in the complaint by the trio accompanies an aerial view of the Nagpur site. “Please see if you can find the DRAL facility with a magnifying glass, if possible, in the 289 acres of Dhirubhai Ambani Aerospace Park in the accompanying satellite image of 29th of September, 2018,” they write. 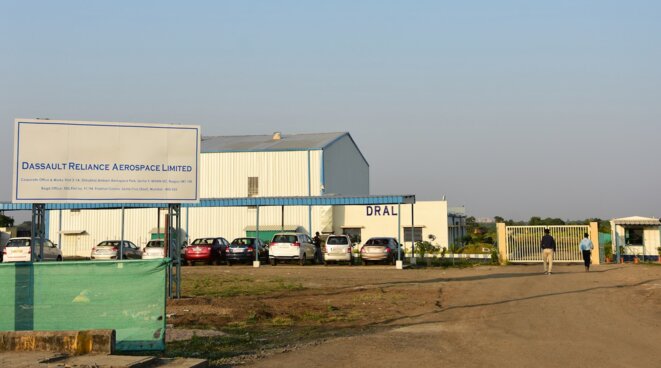 The October 4th complaint accuses Modi of having conspired to annul a work share agreement that, in the early stages of the French bid to supply India’s air force with fighters, was concluded between Dassault and India’s state-owned aerospace and defence corporation, Hindustan Aeronautics Limited (HAL). At the time, the proposed deal with Dassault, initiated with the Indian government prior to Modi’s election in May 2014, was for the purchase of 126 Rafale fighter jets, to be built in India and for which HAL and Dassault, the complaint reads, were to respectively share 70% and 30% of the production.

Instead, Modi was to secure a deal for 36 Rafale fighters, costing twice as much per unit as outlined in the earlier negotiations. The final deal brokered by Modi allowed for a partnership between Dassault and the Reliance Group, which created defence and aerospace arms shortly before and after the inking of the contract. In it, Dassault agreed to re-invest 50% of the 8 billion-euro purchase price of the aircraft in local industrial production, known as an “offset” deal and which is common to many defence contracts. As part of this, Dassault boss Éric Trappier announced in October 2017 that his company was to invest 100 million euros in the Nagpur plant where, he said, production would commence in 2018.

At the end of September this year, members of India’s parliamentary opposition parties lodged an official “memorandum” with the Comptroller and Auditor General of India (CAG) demanding an investigation into the 2016 Rafale deal agreed between Modi and then French president François Hollande, alleging favouritism, mismanagement of public funds, the endangering of national security and the contravention by Dassault Aviation of market regulations.

According to an internal document from Dassault obtained by Mediapart and revealed here, the alliance between the French company and Anil Ambani’s Reliance Group was a “compensation” for the purchase of the Rafales. The document contains a summary by staff representatives of a presentation of the Dassault Reliance Aerospace joint-venture plant in Nagpur made to them on May 11th 2017 by Dassault Aviation’s Chief Operating Officer, effectively the group’s second most-powerful executive, Loïk Segalen. According to the summary, Segalen told the representatives: “It was imperative and obligatory for Dassault Aviation to accept this compensation in order to obtain the Rafale India export contract.”

Contacted by Mediapart, Dassault Aviation refused to offer any comment on the issues raised in this report.

In an interview with Mediapart published last month, former French president François Hollande, who oversaw the Rafale sale to India, said of the choice of the Reliance Group as local partner: “We didn’t have any say in this matter. It is the Indian government which had proposed this service group, and Dassault who negotiated with Ambani. We didn’t have the choice, we took the interlocutor who was given to us.”