As part of their investigation into the suspected funding by the Gaddafi regime in Libya of Nicolas Sarkozy’s 2007 presidential election campaign, two French judges travelled to Tripoli earlier this month when they questioned, for the first time face-to-face, Gaddafi’s former spy chief, and brother-in-law, Mohamed Abdulla Senussi. Mediapart has gained access to extracts from the statements provided by Senussi, who detailed how he oversaw the payment of 7 million euros for Sarkozy’s campaign, as ordered by Gaddafi. He also confirmed that, as part of the deal, the former French president’s personal lawyer and friend Thierry Herzog was involved in moves to overturn an international arrest warrant issued against Senussi after his conviction in absentia by a Paris court for his part in the blowing up of a French airliner in 1989.

Two Paris-based magistrates leading the investigation into the suspected funding by the late Libyan dictator Muammar Gaddafi of Nicolas Sarkozy’s 2007 presidential election campaign arrived in Libya earlier this month, protected by an escort of an elite French gendarmerie unit, the GIGN, to interview two key witnesses from the former regime.

The February 4th-6th visit to Tripoli was the first time that judges Serge Tournaire and Aude Buresi, who were accompanied by a senior officer from France’s anti-corruption police, the OCLCIFF, had questioned the witnesses face-to-face.

They met with Mohamed Abdulla Senussi, Gaddafi’s brother-in-law who served as the dictator’s intelligence chief and who was sentenced in absentia to life imprisonment by a Paris court in 1999 for his role in the in-flight bombing ten years earlier of a French airliner above the Sahara desert. The other was Al-Baghdadi al-Mahmoudi, who under the Gaddafi regime, which was toppled in 2011, was Secretary of the Libyan General Peoples’ Committee, a post equivalent to prime minister. 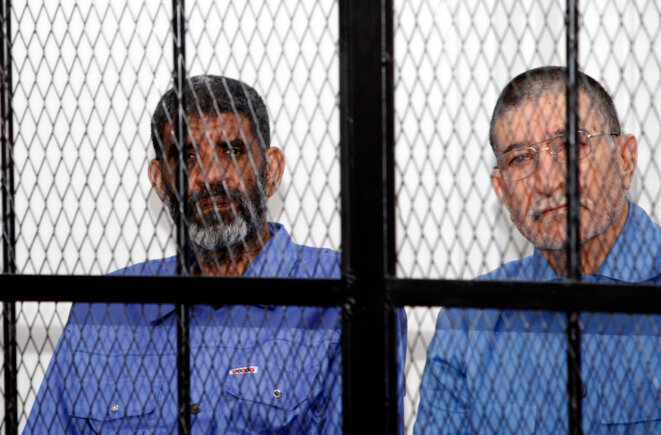 Mohamed Abdulla Senussi (left) during his trial in Tripoli in April 2014 for his role in the violent suppression of the uprising against the Gaddafi regime. © Reuters

Mediapart has obtained access to extracts from the statements given to the French judges by Senussi, which are cited in this report. The former Gaddafi spy chief recounted further detail of the alleged Libyan regime’s funding of Sarkozy’s 2007 campaign, from the moment the subject was first raised between him and a representative for Sarkozy, at a seafront restaurant in Tripoli in 2005, up to when he said he oversaw bank transfer payments of 7 million euros in support of the election campaign.

In March 2018, the French magistrates investigating the suspected campaign funding by Libya placed Nicolas Sarkozy under formal investigation (one step short of bringing charges) for “illicit funding of an electoral campaign”, “receiving and embezzling public funds” and “passive corruption”. The alleged "embezzlement of public funds" was in reference to Libyan public funds.

To be “placed under investigation” in France requires that magistrates have found serious and/or concordant evidence that indicates a person has committed an offence.

Sarkozy, 64, has strongly denied any knowledge that his campaign received funding from the Gaddafi regime.

It is unprecedented in France for a former president to face prosecution for having been sponsored by a foreign power.

The magistrates are also in possession of evidence that suggests a deal for the Libyan funding of Sarkozy’s campaign included an agreement to seek the overturning of the arrest warrant issued against Senussi (see more here) for the 1989 bombing of the French UTA airline DC10 plane, in which 170 people lost their lives. The issuing of the warrant prevented Senussi from being able to travel freely abroad.

Both Ziad Takieddine, the intermediary in the contacts between Sarkozy’s political team and the Libyan regime prior to the 2007 elections, and Claude Guéant, Sarkozy’s long-serving chief of staff, have admitted under questioning in the French probe that the subject was discussed between them.

Senussi, who has escaped a death sentence pronounced against him by a Libyan court for his role in the violent suppression of the 2011 uprising, and al-Mahmoudi are currently prisoners of the internationally recognised government based in Tripoli, and were questioned in the company of a Libyan lawyer and a representative of the Tripoli government’s senior public prosecutor.

Senussi, 66, interviewed by the magistrates on February 5th, is reportedly one of the few surviving senior members of the former regime with close knowledge of its darkest secrets, including financial dealings with foreign powers and high-ranking individuals. 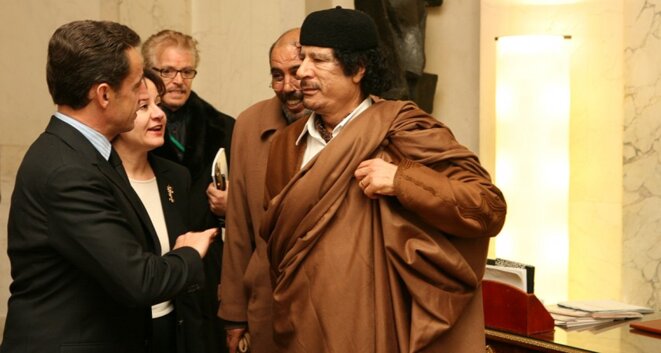 Nicolas Sarkozy with Muammar Gaddafi, accompanied by their interpreters. © DR

“Nicolas Sarkozy was more the head of a gang than a head of state,” Senussi told the magistrates. “Nicolas Sarkozy attempted to kill me several times, carrying out bombings on my offices, my home, on my houses in the south [editors’ note: of Libya]. The 12 houses were demolished in the space of a minute and a half. I saw a plane without a pilot fall close to me.”

Senussi was referring to air raids carried out by a NATO coalition led by France and Britain during the summer of 2011, when French and British planes were engaged in toppling the Gaddafi regime, with UN Security Council approval, after Gaddafi’s brutal repression of civilian unrest which began in February that year. The war ended in October, when Gaddafi was captured and killed.

At the height of the fighting, in August 2011, news agencies Reuters and AFP reported the aerial bombing of Senussi’s home in Tripoli. Reuters reported that the compound where Senussi’s home was situated was completely destroyed in the early hours of August 19th. At the time, Senussi’s arrest was sought by the International Criminal Court (ICC), along with those of Muammar Gaddafi and his son Saïf al-Islam Gaddafi, for crimes against humanity committed during the uprising.

The August 19th bombing raid killed an Indian cook and also destroyed a local school. “This is a residential district,” a neighbour, Faouzia Ali, told AFP at the time. “Why did NATO bomb this site? There are no military here.”

In September 2012, Senussi, detained in Libya after his capture in Mauritania, was questioned by a member of the ICC prosecution services (which finally ruled in 2013 he should be tried in Libya), when he said he had “personally” supervised the transfer of several million euros by the Gaddafi regime for Sarkozy’s 2007 election campaign. He gave further detail about the transaction under questioning by Libyan judicial officials, acting on the request of the French magistrates, in January 2017.

During the questioning earlier this month, Senussi referred to his earlier testimony, telling the French magistrates: “You have my statements, which are very clear. I maintain them.”

Senussi detailed to judges Tournaire and Buresi an account of several meetings and discussions between the Sarkozy camp and the regime over the funding of the 2007 campaign, up to the point of the payments which he said he supervised, for a total of 7 million euros.

Also placed under investigation in the judges’ probe in France are Sarkozy’s former interior minister and long-serving right-hand man Claude Guéant, who was Sarkozy's 2007 campaign director, along with the campaign treasurer, Éric Woerth (who subsequently served as Sarkozy’s budget – and later, labour – minister, and who is today, as an MP, president of the finance commission of the French lower house, the National Assembly).

Like Sarkozy, both Guéant, who is also accused of personally benefiting from the funds, and Woerth strongly deny the existence of illicit Libyan financing of the 2007 campaign.

Referring to the negotiations to overturn the French warrant issued for his arrest over the 1989 UTA airliner bombing, Senussi told the French magistrates that he was “uncomfortable” about the subject. “Claude Guéant came to see me in [the Libyan port town of] Sirte, he showed me a document […] He told me that my situation in France would be sorted out within six months. I took the document but I did not sign it.”

“The second important thing, is that Nicolas Sarkozy sent his personal lawyer, Thierry Herzog,” he continued. “Thierry Herzog arrived by private plane accompanied by a delegation. He was met by the president of the supreme court, Azza Maghur [who acted as Senussi’s lawyer] and a number of judges. They discussed my situation and agreed on a programme.”

As Mediapart reported last June, Herzog, a friend of Sarkozy’s as well as acting as his personal lawyer, travelled to Tripoli on November 26th 2005 – two months after Sarkozy, then interior minister, paid his first official visit to Libya – when the Paris-based lawyer raised the possibility of annulling the judicial procedure against Senussi. According to four official reports about that visit (three written in Arabic, one in English), Herzog was accompanied on the trip by another French lawyer, Francis Szpiner, who was a legal counsel for Sarkozy’s conservative UMP party. More importantly, Szpiner was also a lawyer for a French association offering support to terrorism victims, SOS Attentats, and also represented the families of victims of the UTA airliner bombing.

When he was placed under investigation in March 2018, Sarkozy denied Herzog’s involvement in contacts with the Libyans and described those witnesses accusing him of accepting Gaddafi’s funding as “an association of thugs and criminals”.

“This Mr Senussi tried using every means to benefit from the skills of Thierry Herzog who, beyond his very great competence, is close to me, even going to the extent of sending him in 2008 [in fact, 2006] a mandate to represent him,” Sarkozy told the magistrates. “This mandate was put in the paper bin by Mr Herzog, who refused to make the slightest move or consultation in his favour.”