On January 13th 1963 the president of the West African nation of Togo, Sylvanus Olympio, who had been a prominent figure in that country's fight for independence from France, was assassinated in the capital Lomé. Though the killing shocked the world and marked the first coup d'État in post-colonial Africa, there has never been a proper investigation into who carried out his murder and why. Today, 58 years later, his family are still seeking to “know the truth” about Olympio's death. They are calling for access to France's official archives, hoping that diplomatic reports from the former colonial power will help shed light on this unsolved affair. Fanny Pigeaud reports.

What happened in the immediate hours before the assassination of Togo's president, Sylvanus Olympio, on January 13th 1963, and who killed him? Fifty-eight years later, his family has still not had answers to these questions. Now, for the first time, his family is trying to gain access to official French archives from the period in the hope that diplomatic documents can shed light on this notorious unsolved case.

No one is currently able to piece together exactly what happened in the run-up to this tragic event, one that had serious consequences both for Togo and the whole of the African continent. Sylvanus Olympio, who was aged 60, was the first African president in the post-independence era to be overthrown by a coup d'État and assassinated.

All that is known with certainty is that some armed men in military uniform forced their way into Sylvanus Olympio's personal residence in the capital Lomé on the evening of January 12th 1963 and that they failed to find the president despite a detailed search of the property. They apparently only found him much later that night, in the grounds of or near to the United States embassy next door. 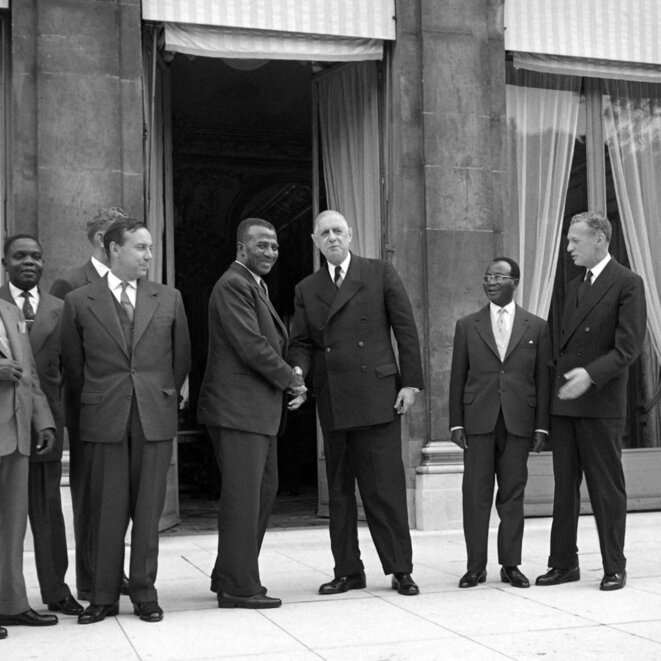 Sylvanus Olympio, who was then prime minister of Togo, shaking the hand of French president Charles de Gaulle at the Élysée on September 16th 1960. © AFP

At around 7am on January 13th three shots rang out. Then at approximately 7.20am the American ambassador, Leon Poullada, and one of his officials discovered Sylvanus Olympio's dead body. According to the official American version it was found slumped in front of an embassy gate, and according to the statement of Leon Poullada's daughter it was inside the embassy compound itself. In the American ambassador's subsequent written report he said a medical examiner had established that the Togolese head of state died from wounds from gunshots and a bayonet.

A report in The New York Times at the time: “The 60-year-old … was shot dead just before dawn in the street outside the embassy building, where he seemed to have been seeking refuge. Ambassador Leon B. Poullada said Mr Olympio's body, riddled by bullets, was found crumpled only three feet from the embassy's unlocked gate.”

Letter at the diplomatic archive centre in Nantes in west France

“We want to know what happened between 6pm on January 12th, the time at which my mother, who was Sylvanus Olympio's sister-in-law, left him, and 7am, the time he died,” said Jean-Sylvanus Olympio, the late president's nephew who has been tasked by the family to carry out the necessary research to fill in the numerous “grey areas” in the case. “We'd already planned in the 1990s to start this kind of process but there was some prevarication within the family,” he said.

Jean-Sylvanus Olympio's lawyer, William Woll, recently asked the diplomatic archive centre the Centre des Archives Diplomatiques at Nantes in west France for information on the documents that are available and the possibility of accessing them. In his letter to the centre he said: “My client wants to know the truth about the murder of his uncle. And France, through its diplomats on the spot at the time of the events and in particular its ambassador Mr Henri Mazoyer, clearly gathered vital information on this issue.”

France was in fact at the heart of the events of January 13th 1963 in several respects. For example, the French ambassador personally knew the future perpetrators of the coup d'État. First of all, he knew them because they were Togolese soldiers who had served in the French armed forces and secondly because it was he who mediated between them and the Togolese authorities. These men, who had been volunteers, had recently left the French military and subsequently wanted to join Togo's army. But Sylvanus Olympio was opposed to this on budgetary grounds.

After the coup the ousted Togolese interior minister, Théophile Mally, accused the French ambassador Henri Mazoyer and some French military officers of having incited the former soldiers to act. France vigorously denied this.

Paris opposed to an independent investigation

The American ambassador Leon Poullada meanwhile complained to his bosses about a lack of transparency by the French at the time, according to American archives studied by the British academic Dr Kate Skinner of the Department of African Studies and Anthropology at Birmingham University. For example, France did not immediately warn the US embassy that a coup was under way.

The Olympio family now want explanations over the role played that day by French officers in the capital Lomé and about the involvement of one of the Togolese men demobilised from the French military, Étienne Eyadéma Gnassingbé, who four years later himself became president. The day after the murder he admitted to carrying out the killing - saying he had been fired on first -  but retracted this admission thirty years later. No one else involved has ever spoken out about it.

Dr Kate Skinner has also identified other information in the American diplomatic archives: the fact that France sought to avoid an independent investigation taking place into the assassination.

At the time it was well known that France disliked Sylvanus Olympio; on several occasions it sought to remove him from the political arena. There were a number of reasons why Paris was not keen on Olympio. A former executive at the Anglo-Dutch company Unilever and an economist trained at the London School of Economics, he had long fought for independence, seeking to liberate his country from France's stifling grasp, and was much closer to Britain.  And as president he rejected all the co-operation agreements that Paris wanted to impose on the country, and was preparing to launch Togo's own currency. That would have meant the end of the financial control that exercised France at the time via the CFA franc currency.

Three days after the murder French president Charles de Galle said to his minister of information Alain Peyrefitte: “This poor man Sylvanus Olympio was cunning. He wanted to play right to the end. He was a Unilever man. He relied on the English. He had grown up opposed to France. Once he came to power against us, he made it seem as if he didn't want to have an agreement with us. Then, seeing that it was difficult without our help, he wanted an agreement but didn't want to give the impression he did. He needed to fool everyone. Naturally he was punished by the very things by which he sinned.”

The outcome of the saga was more to General de Gaulle's liking: the authors of the coup installed an old 'friend' of France, Nicolas Grunitzky – who was Olympio's brother-in-law - as head of state. He abandoned plans for a national currency in Togo and signed the cooperation agreement that had been prepared by Paris. Étienne Eyadéma Gnassingbé, who subsequently seized power in a bloodless coup in 1967, continued this policy of close 'co-operation' with France, as did his son Faure Gnassingbé who succeeded him in 2005. For a long time it was one of Sylvanus Olympio's sons, Gilchrist Olympio, who was their main opponent.

Jean-Sylvanus Olympio and his lawyer are now waiting for an official response about the archives. “If they reply that the documents I'm looking for are classified 'top secret' then I will immediately make a special application to the European Court of Human Rights,” said William Woll. The lawyer said that as a French judge cannot in law force a “top secret” document to be declassified or ensure a document is made available, even at the request of an interested party, there seemed little point in making a legal application in France.

The Olympio family is planning a similar process in the United States, hoping to understand how Sylvanus Olympio's body had ended up in or next to the grounds of the US embassy. They also want to verify the accuracy of a family story according to which it was President John F. Kennedy who had warned Olympio to flee his house that night. “Kennedy and my uncle had known each other well for a long time,” explained Jean-Sylvanus Olympio.