Abdellatif Hammouchi: Morocco's spy chief at the heart of the Pegasus affair

The Pegasus scandal has helped throw a spotlight on the repressive regime in Morocco, which is accused of using the Israeli-made spyware to target the phones of thousands of people, including politicians and journalists in France. In particular it has focused attention on the North African kingdom's top cop and spy chief Abdellatif Hammouchi and his role in the affair. As Mediapart reports, this key figure in the Moroccan state apparatus is feared in many Western capitals, including Paris.

The revelations about the Pegasus spyware, which has been used by some governments to spy on the phones of their citizens, including journalists, have focused close attention on the nature of the regime in Morocco. In particular the biggest spy scandal since the 2013 Snowden affair has shone a spotlight on the role of one man who has developed an obsession with discretion and secrecy and who is feared by many governments in the West, including in France. That man is Abdellatif Hammouchi, the head of the Moroccan police and also boss of the country's intelligence services.

“He is the architect of the slide towards security crackdowns and authoritarianism in Morocco and is the real king of Morocco,” says one French diplomat, one of the rare people to agree to talk, even anonymously, about the “Hammouchi problem”. Indeed, Abdellatif Hammouchi is the first person in the kingdom's history to combine the posts of head of the national police force and the country's surveillance apparatus, of both the domestic and external intelligence services. In June 2019 the weekly magazine Jeune Afrique described him as the Moroccan king's “super cop”.

But having become so powerful, has the spy chief now overstepped the mark and betrayed the trust placed in him? The question arises after the revelations that some senior French and other foreign public figures, including President Emmanuel Macron and several French government ministers, appear to have been directly targeted by Morocco's secret services, in particular the external intelligence agency. 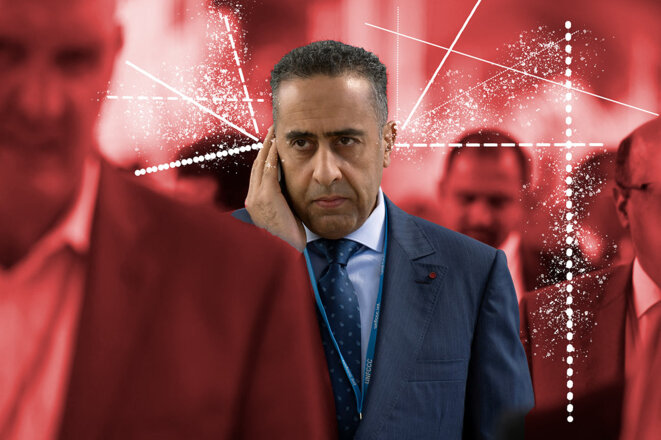 Even the king of Morocco, Mohammed VI, his closest circle and his ex-wife Lalla Salma Bennani, as well as other members of the royal family, both those in favour and those in disgrace, appear to have been targeted with the Israeli-made Pegasus spyware. The surveillance of such powerful figures inside the regime will raise eyebrows. But several observers are less surprised by that than the targeting of thousands of French politicians, journalists, activists and business people and many thousands of Algerians.

This is because the Moroccan monarchy is an authoritarian regime which over the course of decades has constructed a repressive system ensuring that its eyes and ears are absolutely everywhere; at every level of society, in private homes, inside political parties, the media, the business world – and even within the royal household itself. Today the regime's intrusive approach relies on the use of cyber-snooping, thanks particularly to the work of Abdellatif Hammouchi, who has modernised practices and increased the scope of surveillance.

But has this surveillance extended even to the king himself? “Unlike his father [editor's note, Hassan II, who reigned 1961 to 1999], who was a Machiavellian figure, Mohammed VI does not work for power's sake, and it's possible that we're seeing some mid-ranking authorities out of control, in short, slaves who have taken power, which is a new development - if not a turning point,” said one Moroccan journalist.

Among other examples, the journalist cites the 'Azaitar affair'. This involves three Germans of Moroccan origin, two of whom are martial arts stars, who are on good terms with Mohammed VI. As the Spanish journalist and regular thorn in the side of the Moroccan authorities Ignacio Cembrero has stated in the online magazine Orient XXI, the trio are seen by some in the regime as the king's troublesome friends. They love a luxury lifestyle, have had brushes with the law and regularly post on social media about how close they are to “M6”, as some refer to Mohammed VI.

Now the trio are being criticised by the same Moroccan media who until recently used to shower them in praise; that section of media which is known to be a mere appendix of the Moroccan state apparatus, whose stories are sometimes dictated for them and who specialise in smears. “It's a message being sent to the king, an order not to spend time with them any more, it's a new and direct way to speak to him,” said the journalist.

The Moroccan intellectual Maati Monjib recently told Mediapart and L'Humanité: “It's the political police who govern in Morocco, the atmosphere is oppressive.” Monjib, who has himself long been harassed and watched by the authorities there, said: “One group deals with political parties, even pro-regime parties. Others work on civil society, on Parliament, on the world of business. Each sector of society is divided up. One branch which one could call 'disinformation/brainwashing' is specifically dedicated to the media.”

The historian spoke of a “regime based on political cynicism and slurs” thanks in large part to the work of its senior state servant Abdellatif Hammouchi. “The intelligence services have files on all public figures,” said Maati Monjib. “The slightest dissent immediately exposes you to being smeared. Even pro-regime ministers at the highest level are sometimes smeared. Anyone who steps off the path is exposing themselves to attacks from the authorities and to being denigrated by the smear media.”

Hammouchi, now aged 55, who is from Taza in the north-east of the country where the mountains of the Rif and the Middle Atlas merge, and who is a specialist in jihadist networks, enjoyed a meteoritic rise to the position he now occupies. Even the CIA reportedly tried to hire him. An effective operator on all fronts, especially in the domain of antiterrorism, he was aged 39 when he took control of Morocco's counter-espionage services. This made him the youngest director of the intelligence agency or Direction de la Surveillance du Territoire (DST) since the country became independent from French control in 1956 and the youngest head of intelligence in the world.

The DST had been under the control of Hassan II's feared minister of the interior Driss Basri, a symbol of Morocco's violent years and a man who for two decades did the dirty work for Mohammed VI's father and covered up numerous terrible violations of human rights. After Hassan's death, Basri was forced to live the rest of his life in exile in France after being removed by Mohammed VI when the latter acceded to the throne in 1999. The new king had never forgiven the minister for spying on his private life when he was Crown Prince.

Abdellatif Hammouchi is feared in France's Ministry of Foreign Affairs and at the Élysée ever since he was at the centre of a diplomatic dispute between Paris and Rabat in 2014 and 2015. At the time French judges were investigating three complaints against this senior Moroccan figure for torture and complicity in torture (see Mediapart's stories here and here).

On February 20th 2014 Abdellatif Hammouchi was in Paris on a visit when a Parisian judge summoned him to appear before her and sent police officers to the Morocco ambassador's residence at Neuilly-sur-Seine in the capital's western suburbs. The move caused a scandal; Hammouchi declined to appear before the judge and returned to Morocco that same night. And as a result of the episode Morocco immediately ended all security and legal co-operation with France, in particular the sharing of intelligence.

France did all it could to repair the damage. The former socialist government minister Élisabeth Guigou, who is close to the kingdom, and who was then chair of the foreign affairs committee at the National Assembly, was dispatched as a mediator and helped get the French Parliament to adopt a new protocol protecting any Moroccan dignitary under suspicion from the French justice system. After a year the two countries were finally reconciled.

One of Morocco's great dreads and obsessions is the fear that the Moroccan people might also rise up.

Paris even went as far as to pay tribute to Abdellatif Hammouchi and promised to honour him for his help in the fight against terrorism. Following the terror attacks that hit Paris in November 2015 it was thanks to Moroccan intelligence that the French authorities were able to locate terrorist Abdelhamid Abaaoud and his accomplices in the north of the capital.

“You have saved France,” Patrick Calvar, head of the French domestic intelligence agency the Direction Générale de la Sécurité Intérieure (DGSI), told Morocco's super cop at the time. Five years later Abdellatif Hammouchi, who never talks publicly and has never given an interview, now find himself in the limelight he has always shunned.

According to the recent investigation coordinated by non-profit journalism organisation Forbidden Stories with the support of Amnesty International’s Security Lab, Rabat used the Pegasus spyware to snoop on his great rival Algeria. At the time the regime in Algiers was rocked by the Hirak or popular protest movement which ultimately dislodged the hitherto immovable and spectral figure of the country's leader Abdelaziz Bouteflika. One of Morocco's great dreads and obsessions is the fear that the Moroccan people, suppressed and stifled in a land of inequalities, might one day rise up in the same way. Rabat is also obsessed by the issue of sovereignty of the Western Sahara, an issue over which it is at odds with Algeria, and over which the Moroccan authorities are prepared to go to any lengths on French and European soil.

In a statement put out on Tuesday July 20th the Moroccan authorities denied any links with the Israeli firm NSO Group who sell Pegasus, and equally denied any involvement in such espionage. The authorities in Rabat say they are taking legal action against their accusers and criticise what they call a “vast, malicious and lying media campaign”.