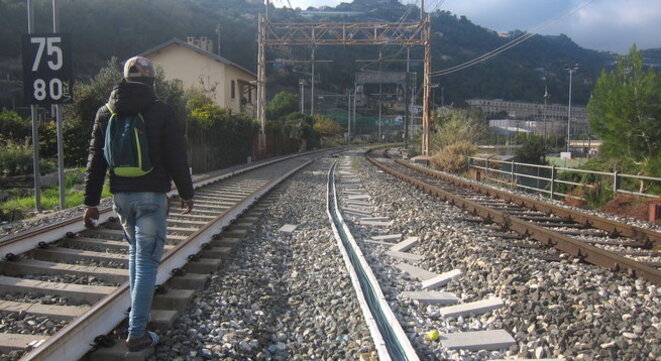 A migrant heading to France from Italy along railway tracks out of Ventimiglia. © LF

European Greens name and shame the 'co-conspirators of tax dodging'

A report published this week by the Greens-EFA group in the European Parliament presented the conclusions of a study of tens of thousands of documents provided by the Offshore Leaks platform of the International Consortium of Investigative Journalists, and which identified the principal intermediaries behind tax evasion. The report demonstrates that many of them are well-known names among banks and financial institutions, operating in countries across Europe as the vehicle for the transfer of huge sum to tax havens. Dan Israel reports.

François Fillon, the presidential election candidate for the French conservative party Les Républicains, appeared on French television on Thursday evening in an attempt to contain the scandal caused by press revelations this week that his wife was paid 500,000 euros from MPs’ funds to act as his parliamentary assistant, a role which, it is alleged, she did not fulfil. Fillon, who was just one month ago regarded as the presidential election frontrunner, denounced the "abject nature of these accusations” but failed to provide clear evidence that his wife Penelope carried out the job she was paid for, while he also admitted to having employed two of his children when he was a senator. Ellen Salvi reports.

French presidential candidate Fillon on the ropes over wife's payments

Former French prime minister François Fillon, presidential candidate of the conservative Les Républicains party and widely tipped as the frontrunner in the elections, was this week fighting for his political survival following press revelations that his British-born wife Penelope was paid a total of 500,000 euros out of MPs’ funds to act as his parliamentary assistant, and which cast doubt about whether she actually fulfilled the role. It also emerges that she was paid about 100,000 euros between 2012 and 2013 by a magazine owned by a wealthy Fillon ally. The public prosecutor’s office has now opened an investigation into suspected “misappropriation of public funds” and “misuse of company assets”. Mathilde Mathieu reports on the background to a scandal that not only threatens Fillon’s future, but which could also radically affect the outcome of the presidential elections.

The first round of the French Socialist Party’s primaries to choose its candidate for this spring’s presidential  elections saw leftist former education minister Benoît Hamon arrive in the lead, followed in second place by Manuel Valls, on the party’s Right and who last month resigned as prime minister to take part in the race. Hamon now has a significant chance of winning the second and final round between the two men to be held next Sunday. But whatever the result, the deeply divided Socialist Party faces implosion. Mathieu Magnaudeix and Christophe Gueugneau followed the two camps as the results unfolded during Sunday evening.

The issue of immigration control sits high on the agenda of campaigning by candidates in France’s presidential elections to be held this spring, a subject that is increasingly manipulated for political gain. The latest annual immigration statistics released this week by the French interior ministry sober a sometimes hysterical debate. They show that a total of 227,500 non-EU foreign nationals were granted residence in France in 2016, a year-on-year increase of 4.6%, while the number of migrants refused entry at border crossings rose by 302% compared to 2015. Just more than 25,000 people were last year granted refugee status. Carine Fouteau reports.

The Paris public prosecutor’s office has recommended that three complaints for forgery and use of falsified documents, for obtaining a ruling under false pretences and for subornation of a witness lodged by former trader Jérôme Kerviel against the Société Générale bank be dismissed. Kerviel, whose high-risk trading was revealed in January 2008 to have cost the bank almost 5 billion euros, has fought a long-running legal battle for the recognition of the responsibility of the Société Générale in his reckless trades, already partly established in court. A senior police officer who twice led investigations into the case and who denounced the bank’s manipulation of investigators, Commander Nathalie Le Roy, has told Mediapart that the decision to throw out Kerviel’s remaining legal action comes as no surprise. Ostracised by her hierarchy, she tells Mediapart that she has no regrets for blowing the whistle on what increasingly appears to be a cover up. Martine Orange reports.

Judith Butler on the 'fascist phenomenon' that put Trump into power 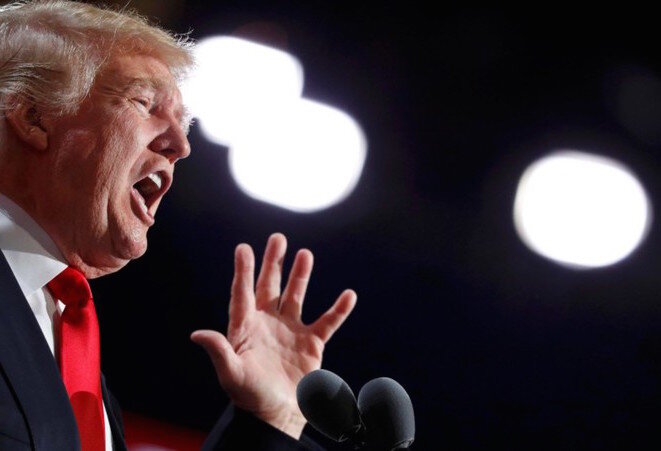 US President-elect Donald Trump will be sworn into office on Friday, as much of the world holds its breath for the start of what is arguably the most controversial presidency in American history. In this interview with Mediapart, US thinker and academic Judith Butler analyses the true political nature of the 70-year-old businessman and reality-show star who is to lead the world's most powerful nation, and who is already at the centre of international tensions. She argues that behind Trump’s electoral success is “a fascist phenomenon” and says that “many rejoice to see this awkward and not very intelligent person posturing as the centre of the world, and gaining power through that posturing”.

As winter bites in the French capital, three humanitarian associations allege the police have been harassing migrants on the streets of Paris and in some cases tear-gassing them as they queue at the refugee centre. And following the destruction of the so-called Jungle migrant camp in Calais, a local association says remaining migrants there are also suffering harassment. Carine Fouteau interviewed Corinne Torre of Médecins Sans Frontières to find out more. 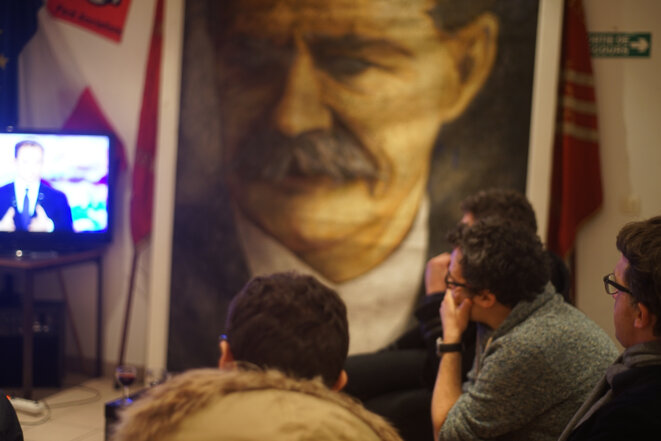 Last Thursday the seven candidates in the Socialist Party's primary to choose a presidential candidate took part in the first of three televised debates. Mediapart joined a group of party members watching the first debate at Roubaix near Lille in northern France, which is historically one of the staunchest of socialist strongholds in France. As Amélie Poinssot discovered, many grassroots activists are still hopeful the party can be rebuilt despite the massive disappointment of François Hollande's presidency.

Following the 2015 terrorist attacks in France, probation officers in the prison system have been instructed to inform the authorities about the “radicalisation” of prisoners. When one officer criticised the new system in a newspaper interview, claiming that being forced to work as “intelligence agents” undermined the trust between probation workers officers and prisoners, her job was threatened. Probation officers also fear that they will get the blame for not flagging a problem if former prisoners go on to commit terrorist acts. Maxime Grimbert reports. 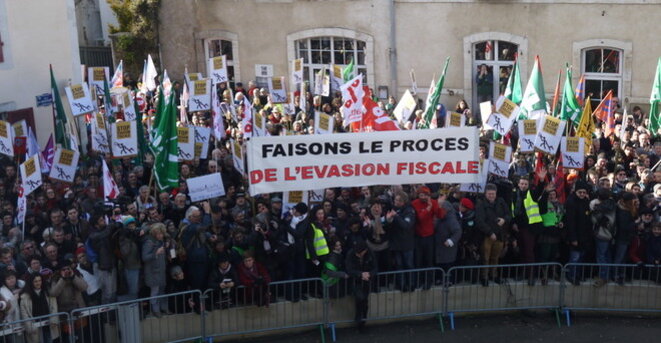 Protesters in Dax, south-west France, turned the trial into an attack on tax evasion.

An activist has gone on trial in a town in south-west France for having “requisitioned” some chairs from a bank. Jon Palais and others took the chairs as part of a wider protest against tax evasion and the use of tax havens which costs France billions of euros a year. The bank in question, BNP Paribas, took exception to the protest and made a formal complaint over their “stolen” chairs. But as Dan Israel reports, the legal complaint backfired as Palais and his supporters turned the trial into a media event in which the bank's own actions were held up to scrutiny. 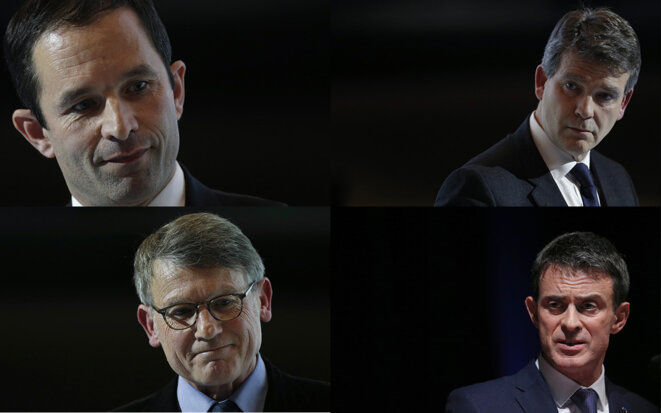 The four main contenders to be the official mainstream socialist candidate for the 2017 French presidential elections, Benoît Hamon, Arnaud Montebourg, Vincent Peillon and Manuel Valls, know each other extremely well. For more than 20 years the members of this quartet have occupied important positions and roles in the Socialist Party and were once hailed as a new generation destined to modernise the party. Now, having never been able to form lasting alliances among themselves, and having been 'blocked' by the generation above them, the four are all standing against each other in the party's primary to choose a candidate for the Elysée. Stéphane Alliès and Donatien Huet report on four politicians who have waited a long time for their chance to become president. 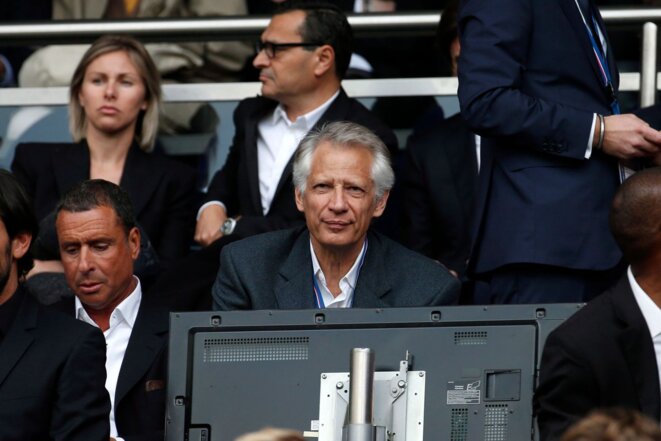 In 2009 the former French prime minister Dominique de Villepin was paid nearly half a million euros in money which originated in a Libyan state fund, Mediapart can reveal. Details of the payment, which came via middleman and business Alexandre Djouhri, have been unearthed by investigators examining another 500,000 euro payment, which was made to Nicolas Sarkozy's former right-hand man Claude Guéánt and which passed through a similar route. Villepin has told detectives he was unaware of the Libyan origin of the money. Karl Laske and Fabrice Arfi report.