The United Nations international climate summit, COP21, opened at Le Bourget close to Paris on November 30th in unusual circumstances. The host country France is under a state of emergency as it welcomes leaders, negotiators and activists from around the world. As Mediapart's environment correspondent Jade Lindgaard reports, a deal at the summit appears to be within reach, but doubts and questions remain about the real direction of the negotiations.

The world has not been so close to a climate agreement since the failure of the conference at Copenhagen in 2009. Nonetheless, society's scepticism and doubts over negotiations aimed at tackling climate disruption have never been expressed so loudly either.

Nor is this doubt simply because the COP 21 climate conference, which formally opens at Le Bourget in north-east Paris on Monday November 30th, takes place against the backdrop of the extreme violence, fear and anger of the attacks in Paris and Saint-Denis on November 13th. It is also because the limitations and the biases of this diplomatic process have been fully exposed to public scrutiny: the reductions in greenhouse gases so far pledged in the draft agreement are not enough to keep the rise in temperatures below an average of 2 degrees Celsius by the end of the century. Even the United Nations admits that.

Moreover, the impact of the negotiations is extremely limited by their principal failing: which is that they tackle the emissions of CO2 and not the activities that cause them (energy system, trade globalisation, modes of transport). So much so that in the draft agreement under discussion at Le Bourget, there is not a single question about fossil fuels, even though burning them accounts for 80% of all human carbon emissions, or about renewable energy or controlling energy use. Despite an overhaul since 2009 in the way such negotiations are conducted – states now propose lowering their greenhouse gas emissions as much as they think they are able to rather than risk tougher targets being imposed on them – these international summits have still not grasped the reality of climate disruption. 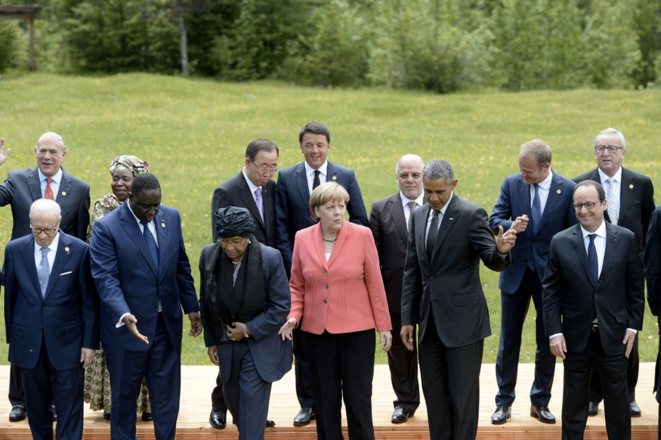 Heads of state and government will be gathering at Le Bourget, Paris, on Monday November 30th for the climate summit.

Since the first climate conference, COP1 held in 1995, more than 600,000 people have died in weather-related incidents disasters, according to a recent United Nations report. The concentration of carbon dioxide in the Earth's atmosphere has now passed 400 parts per million, a fateful threshold which for a long time negotiators thought they could avoid. Faced with this failure to prevent climate disruption, the UN secretary general Ban Ki Moon has called on “civil society” to play its part in fighting against catastrophe. This involved an appeal to insurers, financiers, cement producers, religious groups, cities, associations, trade unions and the world of agriculture to change the way they operated. It was at the same time both magnificently pragmatic and very limited. Which economic sector, which management is going to agree to work against its own assumed and short-term interests linked to pollution (extracting fossil fuels if you are an oil company, building an airport or a motorway..)? Private and public interests become more and more interwoven in climate strategies. This confusion creates conflicts of interest, so-called 'greenwashing', and opens up the road to false solutions (capture and sequestration of carbon, geoengineering, nuclear energy...). 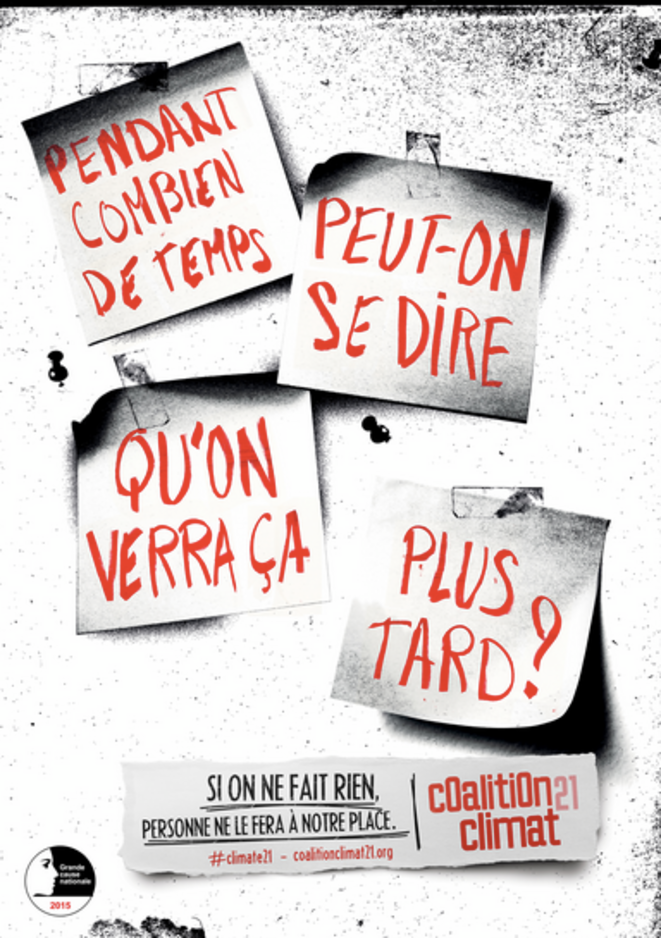 A poster from the group Coalition Climat 21.

In the end, the fundamental inequalities of the climate question persist: rich countries, which developed their industries before the others, from the end of the 18th century, have emitted far more greenhouse gases than the others. And as the French economist Thomas Piketty has pointed out, these wealthier countries still continue to emit more than the others today in relation to the size of their populations. On average a citizen of this planet emits around six tonnes of carbon dioxide a year. But the reality behind this average is far more disparate: the 50% of people who pollute the least, some 3.5 billion people and who are mainly in Africa, South Asia and South-East Asia, emit fewer than two tonnes per person, according to calculations carried out by Piketty and Lucas Chancel in their recent report 'Carbon and inequality: from Kyoto to Paris'.

In contrast, the top 1% of polluters, around 70 million people in number, each emit on average 100 tonnes of CO2 each year. On their own they emit as much carbon dioxide as the poorest half of the world's population. According to Piketty and Chancel 57% of these top polluters live in North America, 16% in Europe and barely more than 5% in China. Overall, the Chinese are the biggest emitters of carbon dioxide. But they only emit six tonnes a year per inhabitant, compared with 13 tonnes of CO2 per person on average in Europe and 22 tonnes in the United States.

In these circumstances, what can one expect from COP21 as it gets under way? Without doubt, an agreement. That is the big difference compared with previous international summits. No country is openly opposed to an accord, and even Saudi Arabia has submitted an objective of cutting its CO2 emissions, by 130 million tonnes a year between now and 2030, though it is currently emitting 550 million tonnes of greenhouse gases a year. The American and Chinese heads of state, Barack Obama and Xi Jinping, plus the Indian prime minister Narendra Modi, are making the trip to Paris. In all, 147 heads of state and government are descending upon the French capital, the sign of an exceptional international mobilisation.

At what stage are the negotiations? The draft agreement is still too long and sets out the options for each key point. But a pre-summit meeting held in Paris in early November between ministers and top officials from a variety of countries and institutions went well. The meeting emphasised “a common and shared vision of the process”, according to Thomas Spencer, of the Paris-based Institute for Sustainable Development and International Relations (IDDRI), a think tank founded by Laurence Tubiana, France's current chief negotiator at the climate summit. “Even if things are moving forward slowly, there's a good level of convergence on the basic components. But the 2 degrees C objective remains a sticking point,” said Spencer.

The rich countries have still not provided a guarantee that 100 billion dollars will be paid each year to fund climate action. But they accept that this sum is a minimum requirement from 2020, on the basis that there is an ambitious agreement in Paris.

The funds involved are due to be shared equally between work on reduction – cutting greenhouse gases – and adaptation, which means helping poorer countries adapt to a changing climate. For its part the G77 countries plus China, who between them make up the majority of the world's population, want the rich countries to make a legally-binding commitment with hard figures, with the sums allocated to financing climate to be raised every two years according to the needs and demands of developing countries. They also want the majority of this money to come from the public purses of the contributing countries. This is precisely what the United States - and to a lesser Europe – reject, as they are looking to funding from the private sector to reach the 100 billion dollar target. President François Hollande is due to make an announcement concerning the 2 billion euros in aide that he promised in September as a payment for the climate, before it became clear that the money chiefly consisted of loans.

Another point of disagreement is the issue of “loss and damages”, in other words the mechanism for compensation and specific aid for the most vulnerable countries. A key issue, too, is the legally-binding nature of any agreement, a subject which is still very vague. The Americans in particular have to find a formula to avoid having the submit the future treaty to a vote in the United States Senate, which has a Republican majority. On the other hand, the principle of a review every five years of objectives in terms of reducing greenhouse gases appears to have been agreed.

Although the climate conference formally starts on Monday November 30th, negotiators gathered a day early, on Sunday 29th November, for preliminary talks. This reflects the fact that they have a tight timetable: they need to have removed most of the alternative options currently in the draft by Saturday December 5th, the date of the closing plenary session of the technical part of the summit. It in then that government ministers enter the fray, and this will be the most political, decisive and most risky part of the conference. The hosts France want the text of the agreement to be ready for Wednesday December 9th, in order to leave time for the legal fine-tuning of the future treaty. But at the moment this is simply what the organisers would like to happen. There is no guarantee that this timetable will be respected.