In an interview filmed by Mediapart the arms dealer and intermediary Ziad Takieddine has described how he brought three suitcases of cash from Libya to give to Nicolas Sarkozy and his top aide just before the former's successful presidential campaign in 2007. In a testimony that backs up claims that Sarkozy's campaign was part-funded by Colonel Muammar Gaddafi's regime, the Franco-Lebanese businessman says: “I discovered things that should no longer stay hidden.” The revelations come as Nicolas Sarkozy makes an enforced exit from French politics after his humiliating defeat in last week's primary to choose the Right's 2017 presidential candidate. Fabrice Arfi, Karl Laske and Nicolas Vescovacci report.

Why Nicolas Sarkozy was sent packing by the Right's voters 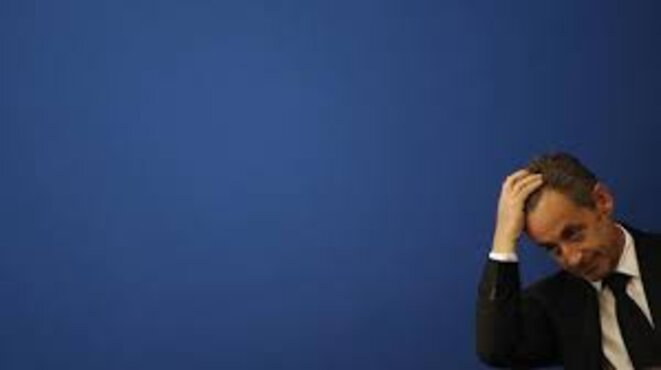 It is both a defeat and a humiliation. Having finished third in the Right's primary election on Sunday to choose a presidential candidate for 2017 and thus eliminated from the race, former French president Nicolas Sarkozy has seen his political strategy torn to pieces. He has, in effect, been sacked by his own electorate. The unprecedented democratic election on the Right has instead witnessed the victory of hardline conservative and former prime minister François Fillon. Mediapart's editor François Bonnet analyses what led to a tumultuous night in French politics that now seems certain to mark the end of Sarkozy's political career. 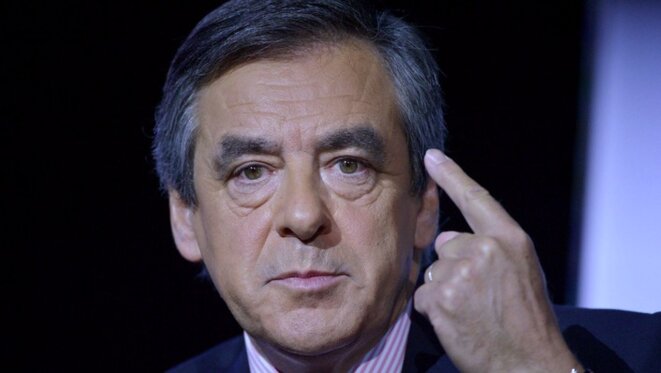 François Fillon is favourite to be the Right's presidential candidate. © Reuters

The frontrunner in the primary election to become the presidential candidate for the French Right and centre is a known admirer of Britain's late prime minister Margaret Thatcher, who was dubbed the “Iron Lady”. His economic plans include a strategic and immediate “shock” to the French system; the end of the 35-hour working week, abolition of the wealth tax, increasing the retirement age to 65 and reforming unemployment benefit and workplace rights. As Martine Orange reports ahead of Sunday's crucial second round contest, François Fillon plans to introduce these sweeping changes within the first two months if he becomes president – despite the risk that they would provoke a recession. 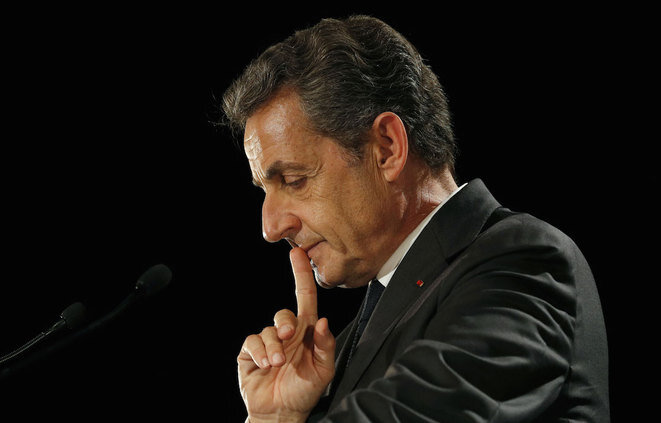 Nicolas Sarkozy was ejected into the political wilderness on Sunday after he was eliminated from his conservative party’s first-round primary elections to decide its candidate for the 2017 presidential elections in France. His former prime minister François Fillon emerged the clear leader of the first-round vote on Sunday, trailed in second place by veteran Gaullist conservative and one-time prime minister Alain Juppé. Both Fillon and Juppé will now move on to the knock-out second round of voting next weekend. Former French president Sarkozy, whose 2007-2012 term of office ended with his election defeat to the socialist François Hollande, is now tipped to leave active politics, as he faces the conclusions of a series of corruption investigations in which he is implicated. Follow here the Sunday evening results and reactions.

The fight to allow France's poor a dignified burial

Funeral costs in France can often be beyond the means of the least well-off and their surviving relatives. In one region an association has teamed up with an insurance company to offer low-cost cover to ensure that the poor can organise a dignified final ceremony. In other areas local associations are naming and shaming local councils in a bid to force them to carry out their legal obligations to provide decent burial arrangements for the most disadvantaged. Mathilde Goanec reports.

The 'monument of complexity' that was Réunion communist leader Paul Vergès

Paul Vergès, the strongman founder and leader of the Réunion island’s Communist Party, the doyen of the French senate and an anti-colonial firebrand who was a significant figure of the international communist movement, has died at the age of 91. Less known on mainland France than his late brother, the controversial lawyer and provocateur Jacques, Paul Vergès became regarded as an untouchable political figurehead on the French Indian Ocean island where he had successively occupied almost every political mandate during a 70-year career. Julien Sartre sketches the sometimes dark story of what historian Frédérick Genevée called “a monument of complexity” who was driven by anti-colonialism rather than social struggle.

Donald Trump’s victory in the US presidential elections largely caught political experts, commentators, opinion poll agencies and the media by surprise. But, argues Mediapart editor François Bonnet in this op-ed article, Trump’s accession to the White House is a "political 9/11" and the most spectacular manifestation of a worldwide cycle that has seen the inexorable rise of strongman leaders, warmongering, nationalism and xenophobia, together with the arrival of extremists at the heart of the ideological landscape. 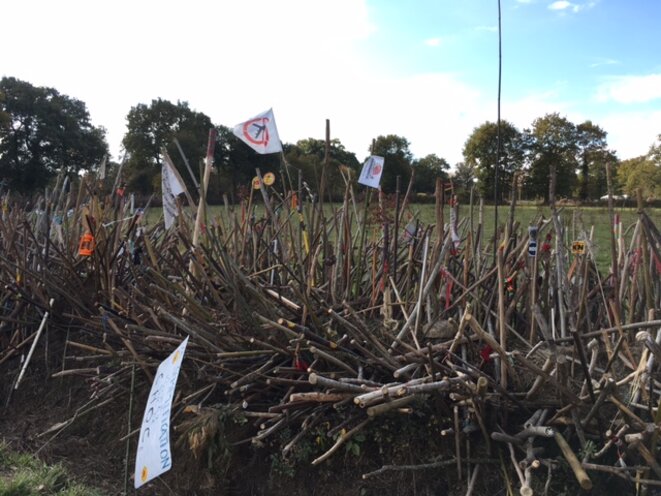 Wall of defence: thousands of opponents' sticks line the boundary of the new airport site. (JL)

Government plans to build a controversial 580-million-euro “Great West” airport in countryside near the town of Nantes in north-west France received a major blow earlier this week when a magistrate ruled that the environmental damage could not be justified by economic opportunity. The shock decision against a project that has been more than fifty years in the making, and which is ardently championed by Prime Minister Manuel Valls while hotly contested by ecologists, is now under review by a panel of judges who will give a final decision early next week. Jade Lindgaard reports from Nantes.

Update Monday November 14th: The magistrate's ruling was overturned by the panel of judges in Nantes on Monday. Airport opponents announced they are now to lodge an appeal before France's highest administrative court, the Council of State.

Ten years after the liberation of five Bulgarian nurses and a Palestinian doctor from Libya, mystery still surrounds how nearly 400 children in that country's second city Benghazi contracted the HIV virus. Now Mediapart can reveal astonishing claims that it was the Libyan authorities themselves who obtained “phials” of the virus to infect many children, to shift blame on to the West. The astounding claims are made in a diary kept by the late Libyan prime minister Shukri Ghanem, who was later found dead in Vienna after fleeing Libya in 2011. Fabrice Arfi and Karl Laske report. 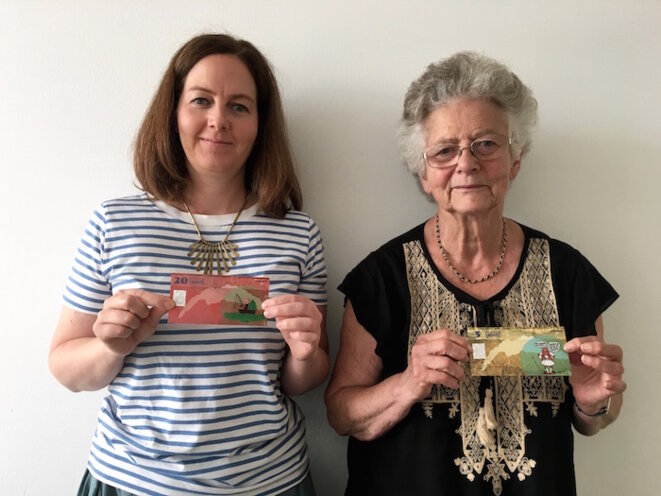 A new local currency that straddles the frontier between France and Switzerland has been set up by local volunteers. The 'Léman' was created a year ago to help forge stronger trade links between local businesses on either side of the border and is growing in popularity. Fanny Hardy reports on the first local currency to be shared by the two nations.

The government is trialling four different systems of food labelling in a bid to inform consumers better about exactly what it is they are eating. But food quality watchdogs claim that the nutrition label test being conducted in supermarkets across France has been hijacked by the food producing lobby and should now be abandoned. Karl Laske reports. 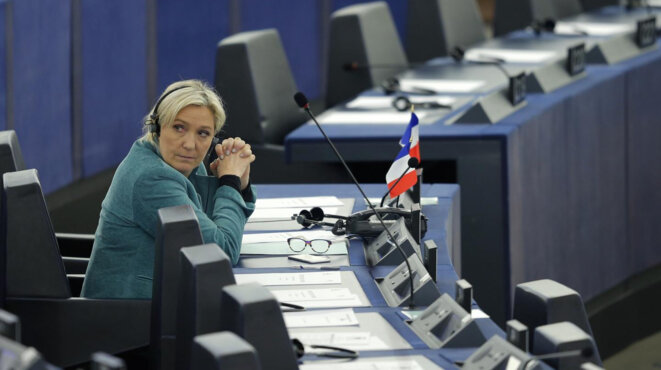 The European Union's anti-fraud office has called for France's far-right leader Marine Le Pen to pay back hundreds of thousands of euros in staff allowances. Officials say Le Pen, president of the Front National (FN), wrongly paid two of her staff out of EU funds in her capacity as a Member of the European parliament when in fact they were mostly engaged in internal party work. In a joint investigation with magazine Marianne, Mediapart can also reveal that French prosecution authorities have broadened their probe into the financing of around 20 FN assistants at the European Parliament. Marine Turchi reports. 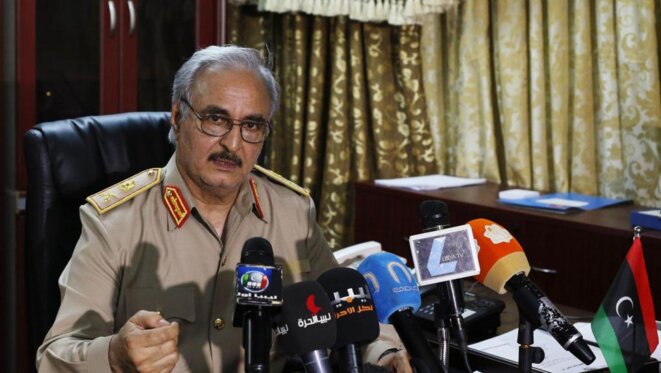 General Khalifa Haftar is a rival to Libya's official government but is supported militarily by France. © Reuters

Under President Nicolas Sarkozy France launched a military intervention that plunged Libya into chaos. Now under President François Hollande Paris is conducting two parallel and very different policies; one official, one secret. In Tripoli France supports the government that is recognised by the international community. But at the same time it is also discreetly providing military aid to the official Libyan government's main adversary, General Khalifa Haftar, whose power base is in the east of the country. René Backmann and Lénaïg Bredoux investigate.

In 2012 the French post office La Poste agreed to set up a commission to find ways to reduce work-related stress, illness and suicides following its abrupt change of status from state-run enterprise to a limited company funded by the public purse. But today unions and workplace health experts say that many of the group's 260,000 staff are still suffering from the pace of change caused by endless reorganisation. As Rachida El Azzouzi reports, management are now in talks with unions in a bid to solve the problem. 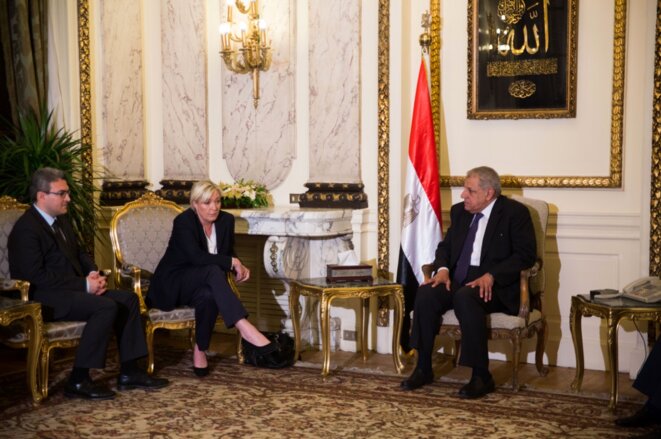 France’s far-right Front National party is attempting to find funding from abroad for the 2017 presidential election campaign of its leader Marine Le Pen, who has been unable to convince French banks to provide the sizeable loans the party needs. Among potential foreign backers the party has already had contacts with is the United Arab Emirates which, according to one of Le Pen’s close entourage, financed an official visit she made to Egypt in 2015. Marine Turchi reports.